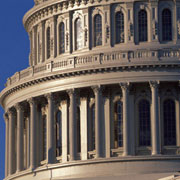 As the political debate heats up we hear more about Big Government and the problems that it causes Americans. At first I had a hard time getting my mind around what Big Government is, but then I started doing some research.

I am a retired engineer, and like clear definitive answers, but was not able to find that one or two liner that made everything clear. Then I realized Big Government is the generic term often used when we think government–whether local, state or federal–intrudes on our lives or business dealings.

Over the years, in my careers as an engineer and small city mayor, I have dealt with many government regulations and agencies, including: OSHA, EPA, MPA, FEMA, DNR and a host of others. There have been many times when I complained about their regulations. Although I complained, I also realized that regulation has done much to make our lives better.

For example there is not an industry today that is not safer than it was prior to the Occupational Safety and Health Act (OSHA) in 1970. Since OSHA was created in 1970, workplace fatalities have decreased 60% despite the more than doubling of the work force. Job related injuries and illness rates have decreased by 40%. And, yes government regulation has increased.

We can also credit the Environmental Protection Agency (EPA) for the restrictions on DDT that have brought our eagle and ospreys back from the edge of extinction as well as protecting us from its effects.

It has worked to prevent future Love Canal type environmental disasters. Government controls on nuclear power have prevented a Chernobyl disaster in this country.

Unfortunately not all is good news. Poor regulatory enforcement for the oil industry was at least partly responsible for the destruction of the Deepwater Horizon, eleven deaths, and the resulting oil spill in the Gulf of Mexico. We have a general laxity of regulation in our food industry. In Europe people can order and eat chop meat raw rather than cooked medium well because of their stricter regulation.

Of course the environment and job safety are not the only areas of government regulation. They also affect many areas of our lives along with business and industry.

Banking and finance has been an industry where there has been much discussion about regulation. Most believe a major cause of the worldwide recession that began in 2007 was inadequate regulation in the financial industry. The Savings and Loan Crisis of the 1980s can also be blamed in part on reduced regulation of the industry.

At the same time we think about these current financial problems, we need to realize that financial crises have been a part of our history, and it has only been in the 20th century that that regulation and control has provided more stability to our economy.

As I talk about the benefits of regulation, I do realize regulations’ limitations. We have an option here: whine about the costs of public policies aimed at protecting us, or work to promote fair regulations that ensure workplace safety, environmental sustainability and provide a level playing field.