This Monday, August 30, from 6:30 to 8:30 p.m. at Edison High School, the city will host the first of five public comment sessions on the Master Plan. The plan can be read in its entirety here, and the concise Executive Summary makes for a nice introduction to the hearty main dish.

On August 18 the city opened up a 45-day comment period on the plan. Citizens have until October 1 to submit their feedback through the city’s website, postal mail or public meetings. Then the plan will be revised and returned to the City Council for approval.

The plan is the first of its kind for Minneapolis. While earlier bike-planning documents consisted solely of maps, this one has eight chapters and puts forth a broader-reaching social agenda that considers access, equity and the environment.

Despite being considered the country’s number-one bike city, Minneapolis is reaching this policy milestone later than some of its similarly regarded peers. Pubic Works Transportation Planner Don Pflaum said that when the city started the drafting process in 2008, it looked for inspiration from the plans of places like Portland, Seattle, Chicago and the plan of comparably sized Davis, California.

Despite its title, Minneapolis’s Bicycle Master Plan “can’t just be all about bikes,” Pflaum said.

“It’s a plan for everybody,” he added. “It’s a piece of the puzzle that fits within other modes (of transportation).”

To that end, Pflaum is encouraging all sorts of people — car drivers, business owners and pedestrians included — to come talk about how biking and bicyclists affect them.

As for the plan itself, Transit for Livable Communities‘ Steve Clark, who served on the Bicycle Advisory Committee that helped write it, said cycling advocates should ensure it clearly puts biking front and center.

“I think we should make sure there are strong policies that are going to prioritize biking, that treat it as a solution to our transportation problems — not simply a special interest,” Clark said.

Starting a city-wide bike curriculum, procuring grant money and implementing a uniform set of bikeway standards are three of the 21 goals presented in Chapter 4 – Goals, Objectives and Benchmarks.

Reducing bike accidents and eliminating fatalities, the majority of which involve a large vehicle, is another goal. Below, a ghost bike, located near the intersection of Nicollet Avenue and South Fifth Street in downtown Minneapolis, pays tribute to Nik Morton, who was 18 and on his way to Minneapolis Community and Technical College when he was killed by a truck. 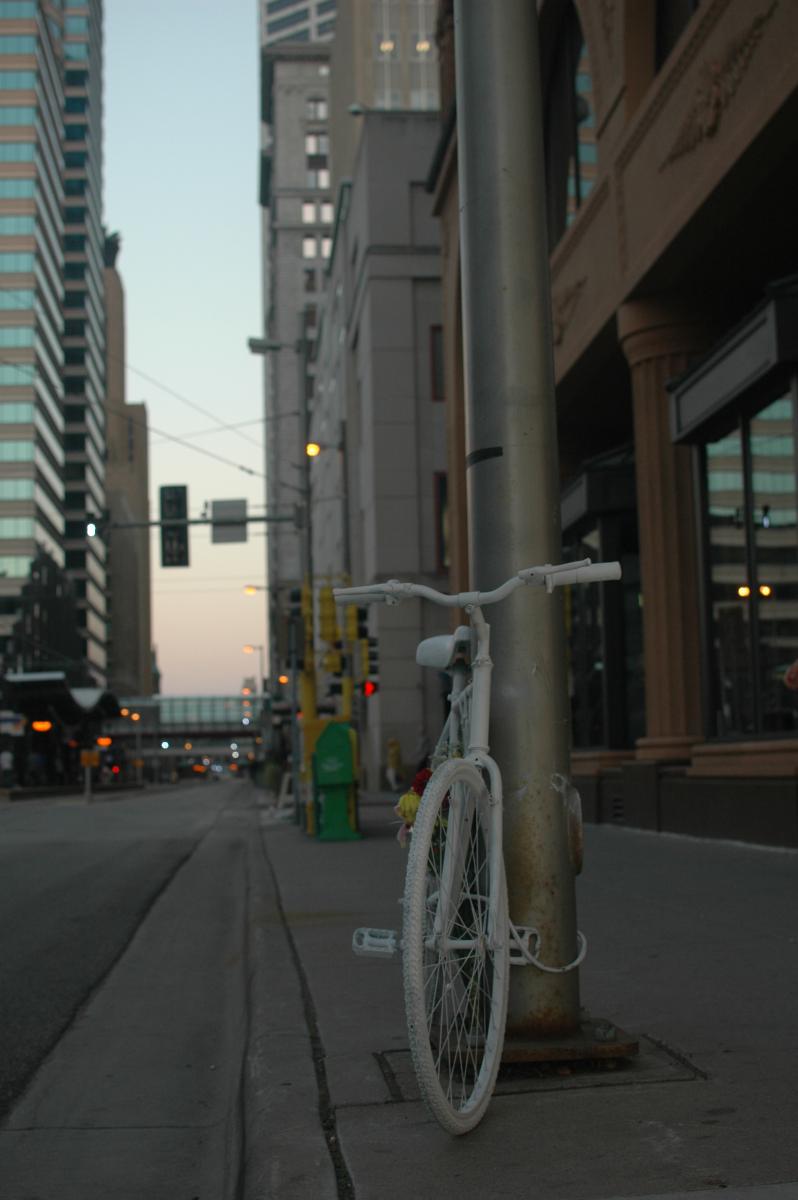 Rik Lamm, 20, maintains this memorial for his deceased friend, with whom he biked this route every day. 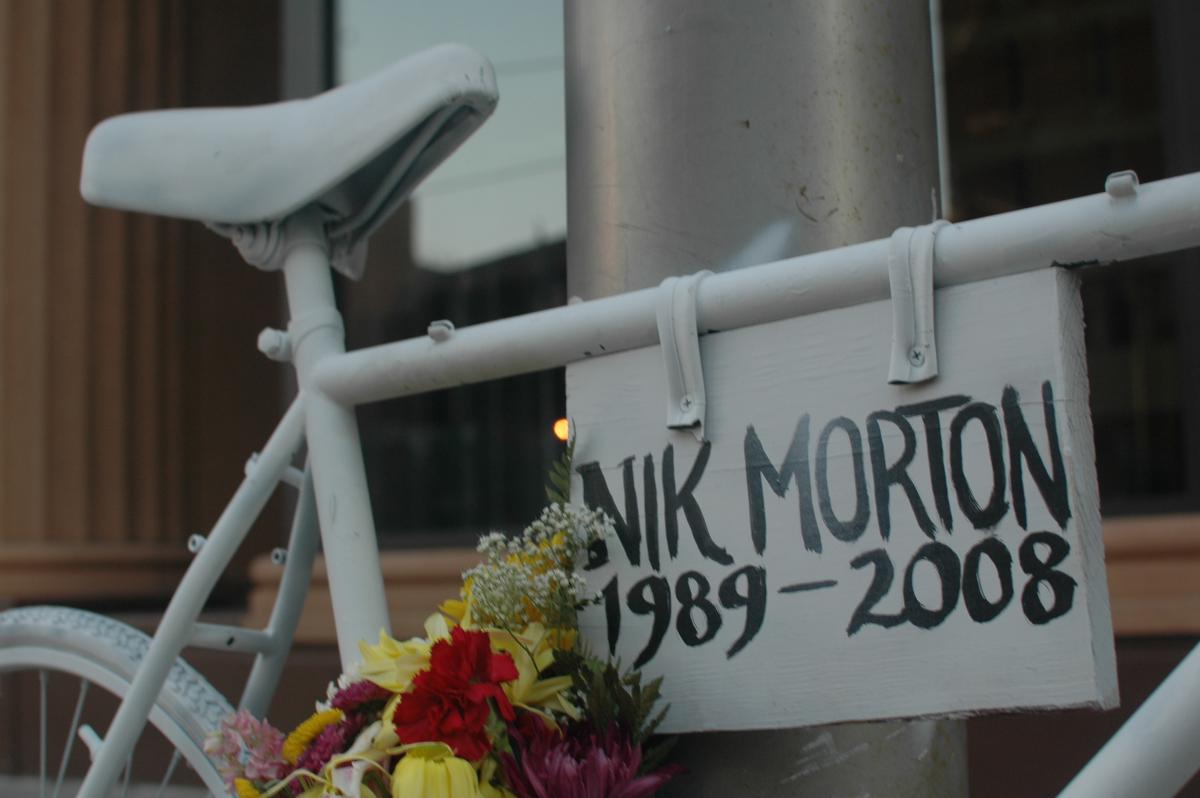 As it works to decrease cycling injuries and death, the city also wants to increase citizens’ access to bikeways.

Under the plan, half of all residents should live within one mile of an off-street trail, and within one-half mile from a bike lane, by 2020. They should also be within a quarter mile of a signed route.

By 2040, each city resident should be this close to the biking action.

To get there, the plan calls for the select employment of “innovative treatments.” These are tactics that may have been tried in other cities, states or countries, but have not yet been used locally. The shared bike/bus lane on Hennepin Avenue in downtown is one such attempt.

This means adding another 45 miles of on-street and five miles of off-street facilities to the city’s existing amenities.

The city also wants ample places for cyclists to park, so it’s pledged to outfit all its public buildings with racks, like this one outside the Central Library. 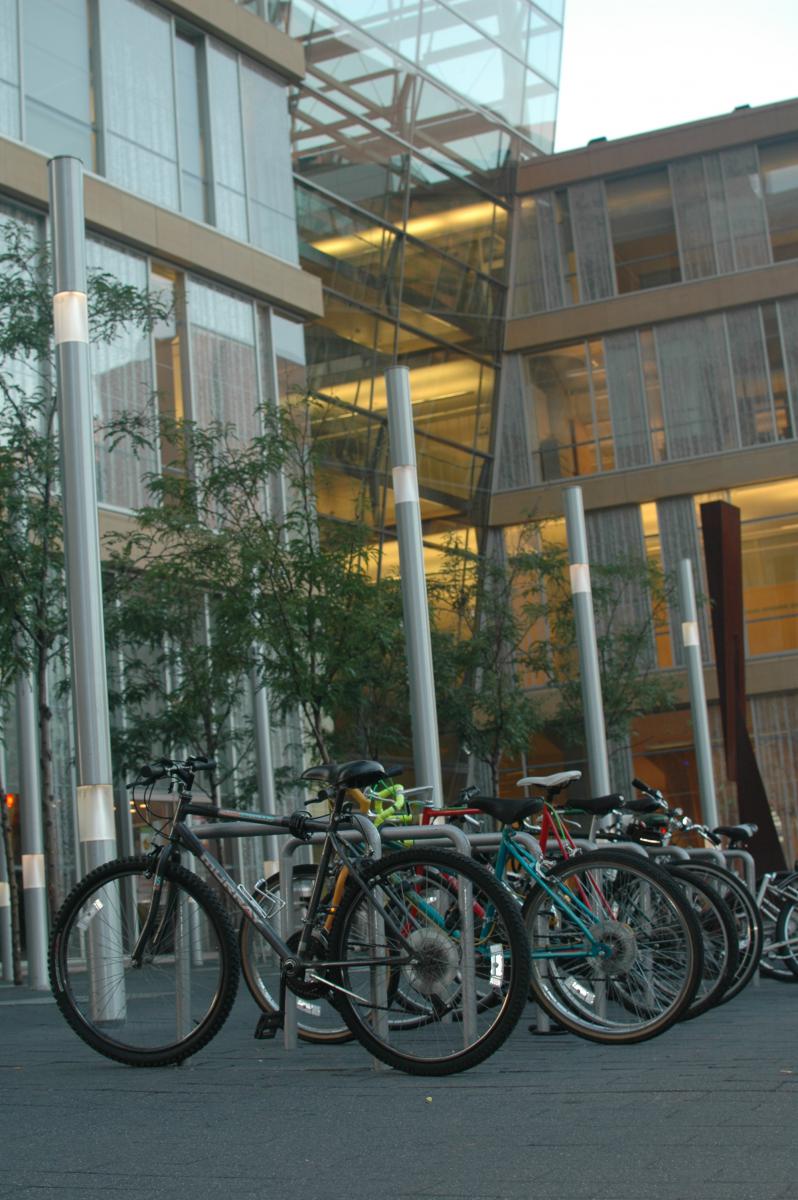 The plan also says the city will continue to help private businesses install racks through its cost-share program, and will provide riders with locks to reduce bike theft.

While Chapter 4 sets high standards for the state of city cycling, Chapter 7 – Projects presents a more sobering time frame for how long it will take to get there.

Every proposed infrastructure improvement (see page 14 of Chapter 7 for a map) is held up against nine criteria that measure things like community support, plans for maintenance and cost-effectiveness. Unless a project meets all nine criteria, it won’t be considered for funding.

At this time, only a small minority of proposed projects are considered ready for funding, and no further timeline for their completion is set. In North Minneapolis, for example, the plan identifies 22 projects that need to be completed, but only two are ready for funding consideration today.

“It’s going to take 20 or 30 years before the majority of these projects are going to happen,” Pflaum said. “It’s a long process to get to that point, but if you don’t have a plan in place you never get there.”

While many bike lanes or trails will have to wait, the plan indicates that many of the city’s vehicle-actuated traffic signals could soon be retrofitted to recognize bikes.

“When resources become available, you do a lot,” he said. “You kind of have to ride the funding wave.”

In the meantime, Ward 2 City Council Member Cam Gordon is urging citizens to make the plan the best it can be by reading it, attending the meetings and submitting feedback by October 1.

The more unified feedback the council hears on an issue, the more likely it is to be changed in the plan, he said.

“If people are organizing around, ‘Hey — let’s make these changes,'” Gordon said, “the council will notice.”