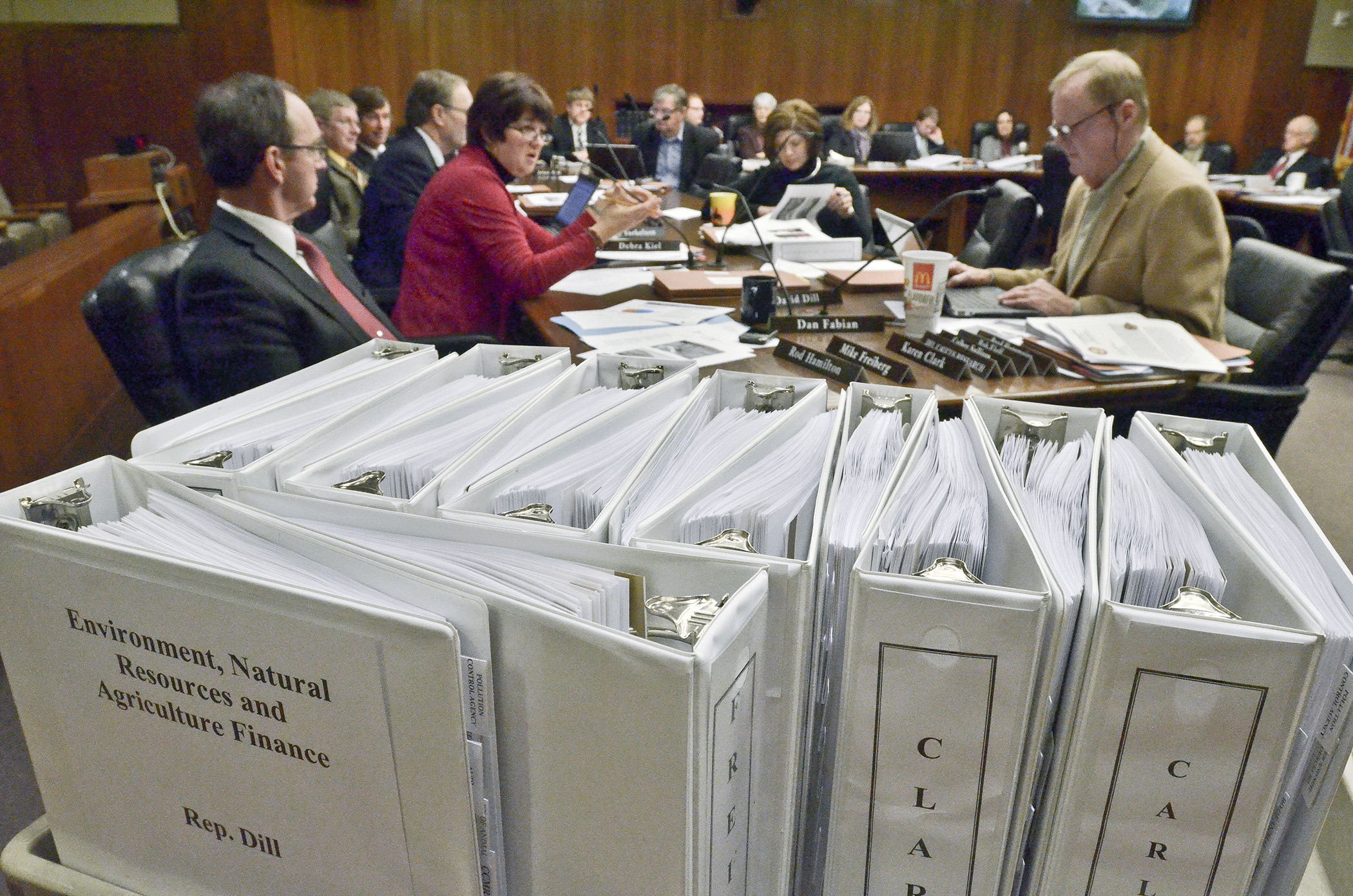 (Above, members of the House Environment, Natural Resources and Agriculture Finance Committee discuss issues with representatives from the Department of Natural Resources during a Feb. 21 budget overview. Photo by Andrew VonBank)

The Department of Natural Resources’ strategic goals over the next four years are to ensure Minnesota’s outdoor recreation opportunities meet the needs of new and existing participants. But several House committee members question whether the department is actually making this happen.

With nearly three-quarters of a billion dollars in expenditures proposed in Gov. Mark Dayton’s 2014-2015 biennial budget, it should come as no surprise the Department of Natural Resources has faced serious scrutiny from lawmakers over the past several days — and that was just from members of the House Environment, Natural Resources and Agriculture Finance Committee.

Those examinations continued Thursday, as the committee held its third hearing of the week, listening as DNR officials detailed the agency’s recent operations and plans for the years to come.

“There is a lot of information I think we’re going to have to digest,” said Rep. Jean Wagenius (DFL-Mpls), the committee chair. “DNR has a big budget and a lot of problems.”

Appearing before the committee Tuesday morning, DNR Commissioner Tom Landwehr called the budget “very complicated” and explained how the department’s “results-based management system” was used to link goals and budgets with indicators that measured results. This approach serves the DNR’s mission, summed up by the phrase “Conservation that works,” which the department has recently coined.

Landwehr said one of DNR’s strategic goals over the next four years is to ensure Minnesota’s outdoor recreation opportunities meet the needs of new and existing participants. But several committee members question whether the department is actually able to make this happen.

Rep. Rick Hansen (DFL-South St. Paul) asked if the DNR had measured how many people are using the wildlife management areas the department acquires. The commissioner said counts for state trail use are done periodically, and can be done “robustly,” but that there aren’t comparable numbers for WMAs or other units of the outdoor recreation system. Hansen said such numbers would help with spending decisions going forward.

“When we get to funding, if we’re going to be at a position with the budgets where we’re going to have to restrict or close state parks that people use, and we keep acquiring land for WMA’s that we don’t know if people use — and we have over a million acres already — then the question of usage becomes important,” Hansen said.

Rep. Paul Torkelson (R-Hanska) asked Landwehr if the DNR had statistical evidence the state’s continued acquisition of land was “having some positive impacts.” Landwehr said no study had been done by DNR between the correlation of public land ownership and public participation.

“What I’m really interested in is the millions of dollars we’re spending to acquire additional lands,” Torkelson said. “What are the benefits to wildlife, what are the benefits to the environment, and how is that more beneficial than working with private landowners to assure that they understand how they can best accommodate wildlife and the ecosystem on their own private lands?”

Although Landwehr wasn’t present for Thursday’s meeting, DNR officials continued to field questions about the department’s finances. Steve Hirsch, director of the Ecological and Water Resources Division, appeared to answer questions about an increase in the fee watercraft owners currently pay first proposed in 2012 but not adopted.

Since 1993, boat owners must pay a $5 surcharge when licensing those vessels every three years. This generates about $1.3 million each year and funds the state’s Invasive Species Account, used to combat the spread of aquatic invasive species. DNR’s 2012 budget request proposed increasing this surcharge on a tiered scale. Under the proposal, boaters would pay $5 for canoes/kayaks; $15 for boats under 17 feet; and $20 for all other watercraft.

DNR officials estimate this increase would bring in about $3.9 million per year.

Rep. Denny McNamara (R-Hastings) said he was “dumbfounded” the governor hadn’t included the fee increase in his current budget proposal. “It’s the right thing to do, I think the boat owners realize it,” he said.

Several lawmakers said the increase could be used as a dedicated fund that would provide an ongoing source of money for the state’s fight against invasive species. Rep. Phyllis Kahn (DFL-Mpls) voiced strong support for the increase and added, “I don’t see why it can’t be considerably higher.”