The three-day party that is the Bicycle Film Festival started Thursday with several hundred bikers lounging on the grassy summit of Gold Medal Park in downtown Minneapolis.

Bjorn Christianson, one of four locals who’s producing the Minneapolis leg of the international event, summoned the group to action. Through red lights or green, they’d make it to the Minneapolis Institute of Arts (MIA) in one big mass—and so, at his word they wound down the hill, rolled onto the streets and snaked together through downtown. 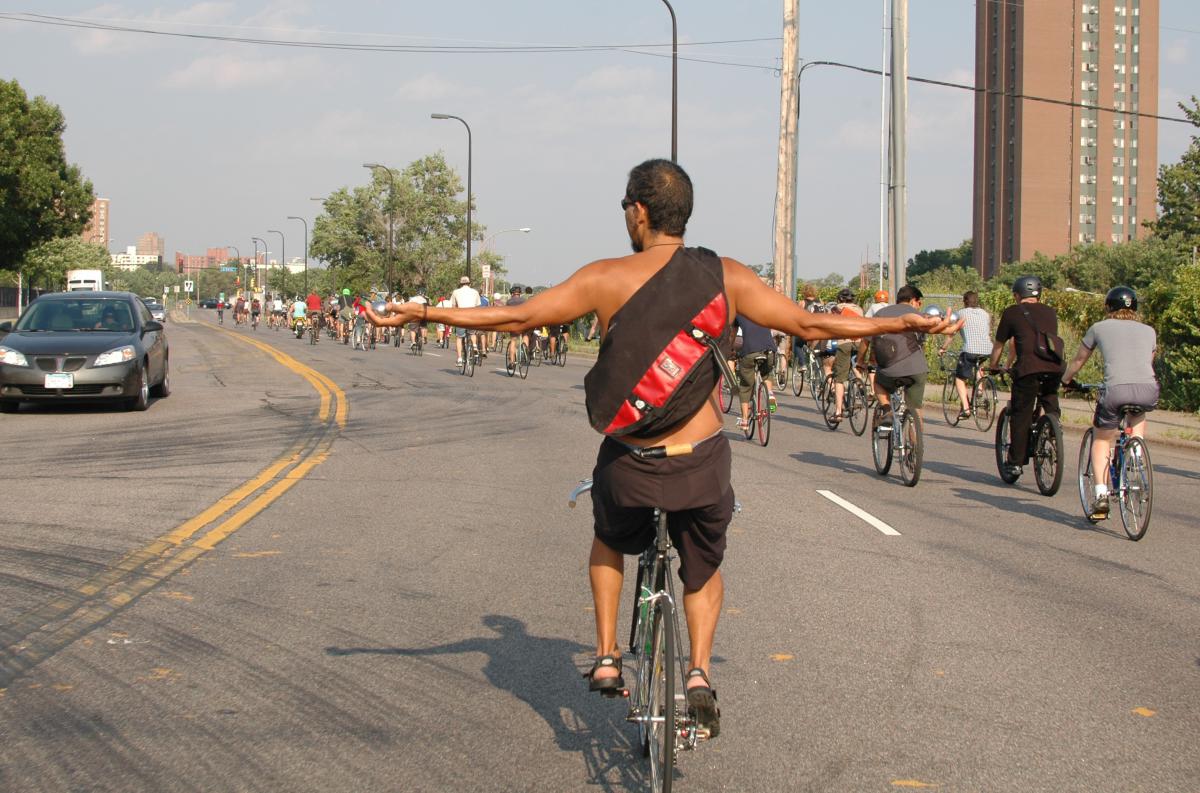 This is the tenth year of the Bicycle Film Festival, which originated in New York City and stops in cities including Amsterdam, Vancouver, Paris, and Portland. It’s the fifth year it’s visited Minneapolis, though Thursday marked the first time the MIA has been involved.

Friday and Saturday’s films will be shown at the Cedar Cultural Center, but the MIA’s annual Bike Night was a fitting venue for the festival’s kickoff, co-producer Amy Kuretsky said.

“This is a cultural festival that’s all about art, music and bikes, so it’s nice to mix it with a museum,” Kuretsky said.

Once they reached the MIA courtyard the bikers were relieved of their steeds by fast-moving valets from Freewheel Bike, such as Karl Stoerzinger, below. 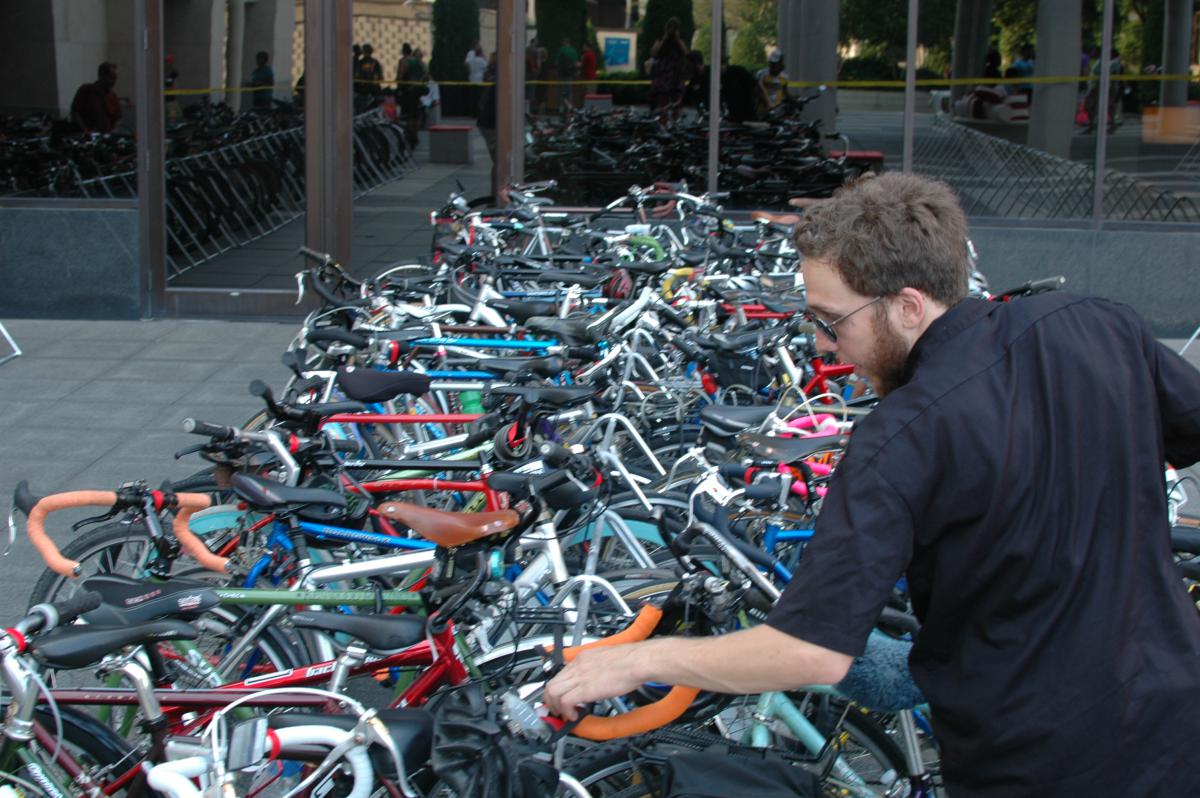 Mechanics from the Hub Bike Co-op offered free safety assessments and quick fixes. Maureen Kirby, below left, has been riding her Schwinn Prologue for 22 years. She was happy to learn from Seth Jacobs that with only a tune-up it could give her a good 15 more. 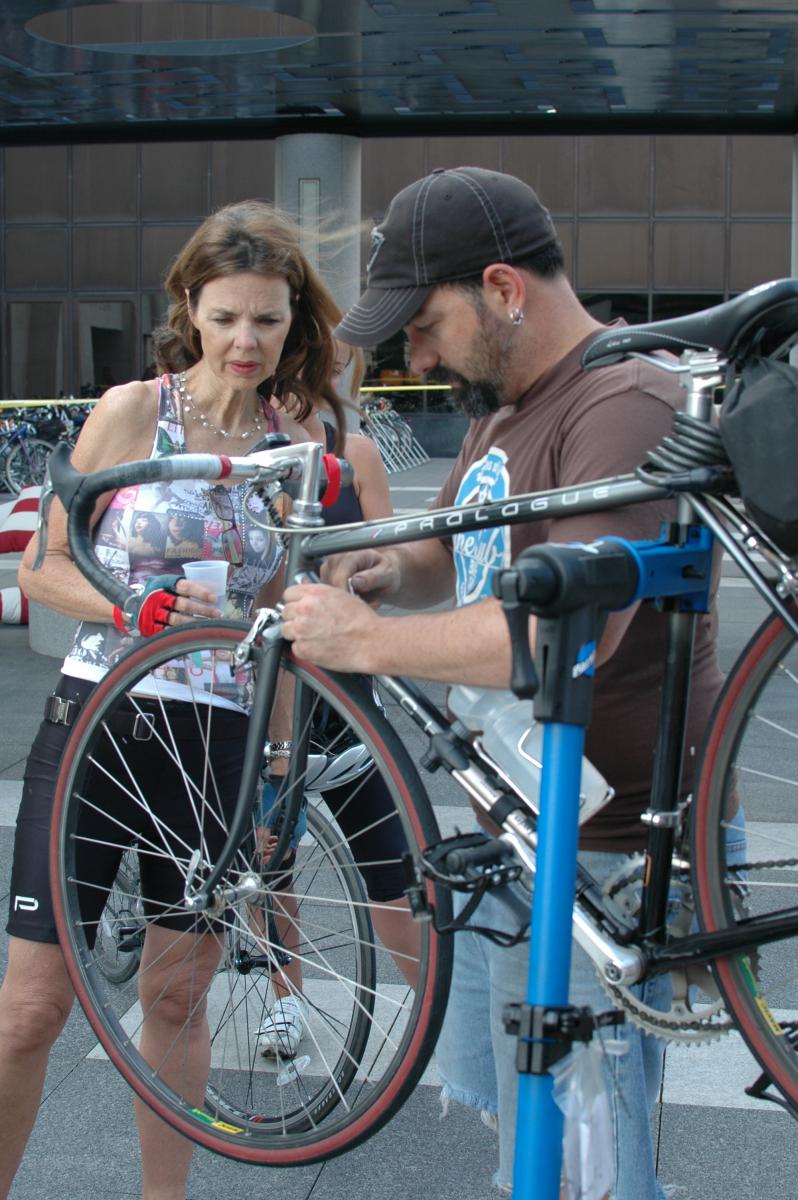 “They said don’t change it,” Kirby reported. “Steel’s coming back.”

There was also beer, live music (courtesy of A Night in the Box) and tossed-through-the-air prizes, which the crowd, below, eagerly snatched up. A raffle left a handful of lucky folks left with bigger-ticket items like Chrome messenger bags or a Surly bike. 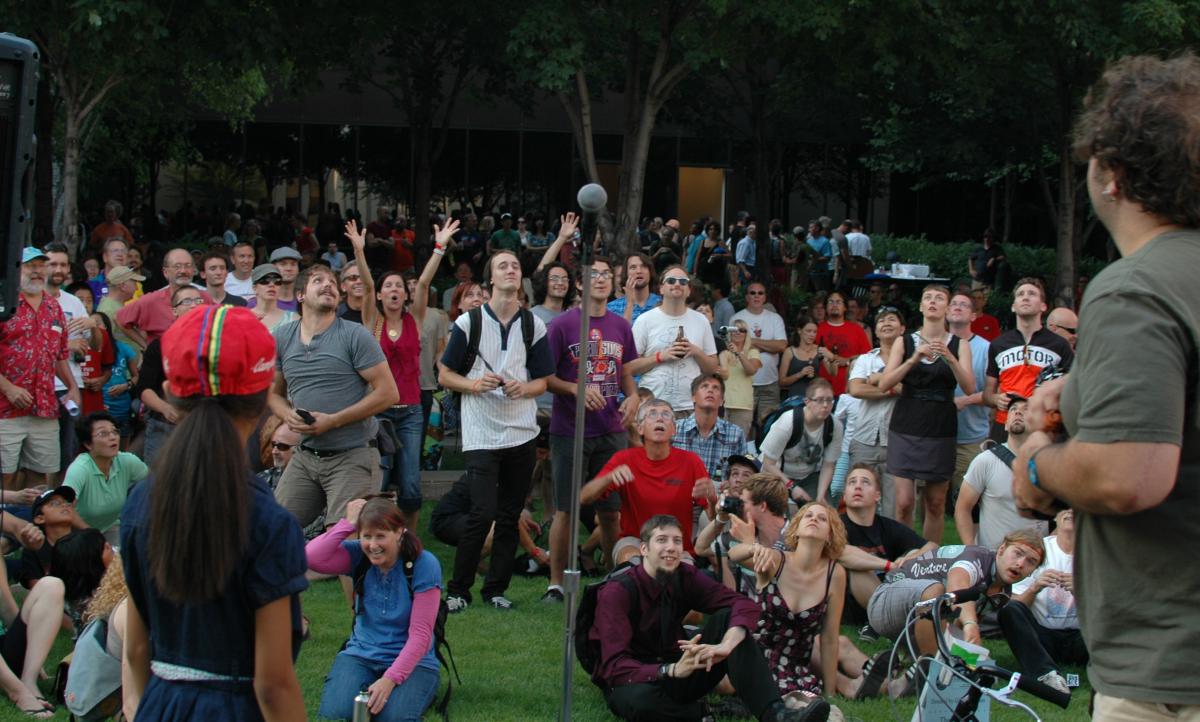 The evening offered two 45-minute sets of short films. Many of these, Kuretsky said, were favorites from previous years, picked again to appeal to the potentially wider audience brought in by the MIA.

It was standing-room only in the auditorium for the evening’s second set. It featured, among other narratives, the stories of a bike messenger who has a string of bad luck (On Time), a man who rides 50 miles to see a girlfriend who promptly dumps him (Bike Ride), and a group of fearless riders who race dangerously through the crowded streets of New York (Broadway Bomber/Bridge Battle/Monstertrack).

As they filtered out of the auditorium and prepared to get back on their bikes, festival-goers compared notes on the evening.

Joe Sayles, who’s attended the festival for the last three years, said he’d seen many of the films before. Still he was impressed with the size and breadth of this year’s crowd, which never fails to provide him with people-watching entertainment.

“I like to see the variety of bike culture,” he said, “and there’s more tattoos per square (inch) than most places I go.”

Harry Greenberg, education director for the Bike Commuter Institute, which promotes bicycling safety and rider responsibility, had a visceral reaction to some of the edgier films.

“I hated the movies,” he said.

“I love the event, and I loved the whimsical movies,” he added. “But the daredevil stuff was really a turnoff, because someone could get hurt.”

Not everyone felt that way, including his date, 51-year-old Rhonda Walker. For her, the danger-filled films marked an invigorating virtual departure from her normally safe riding routine.

More films, group rides and after-parties are on the weekend’s agenda; go here to see the full schedule and make your plan. 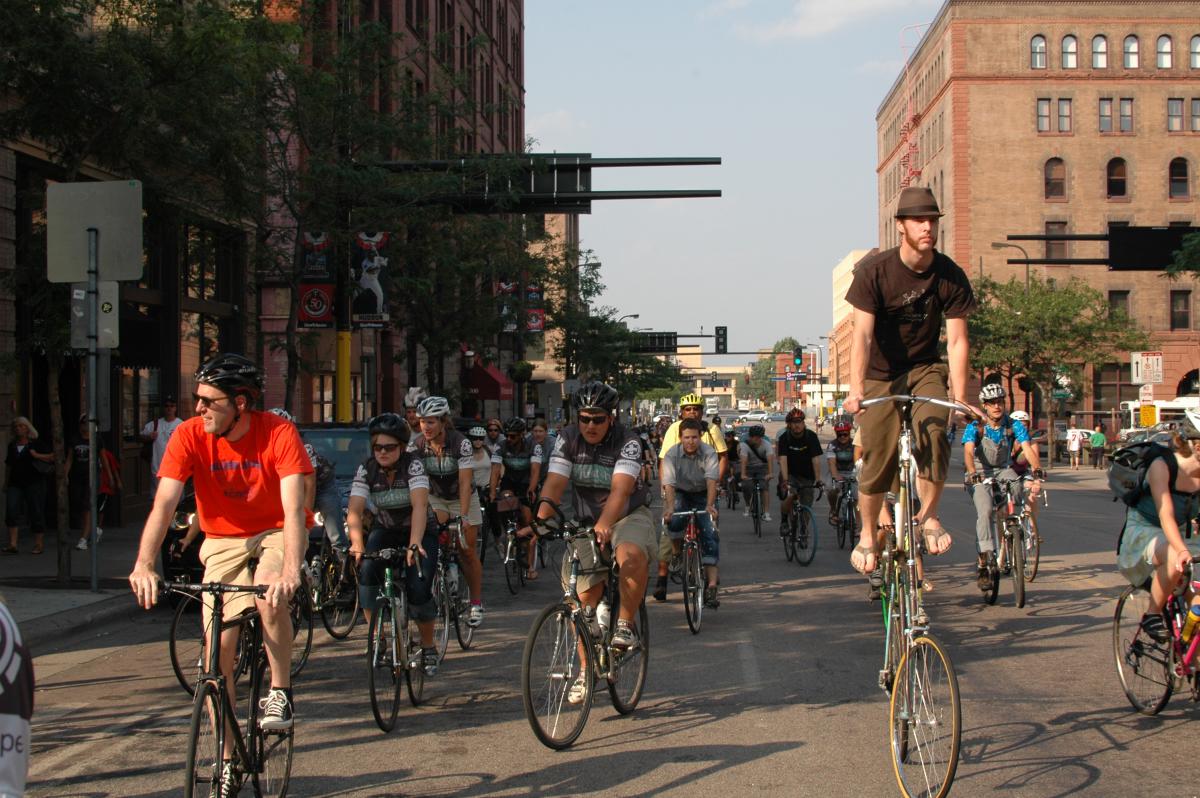 Above, a group of riders cruise together to Thursday’s opening-night events.