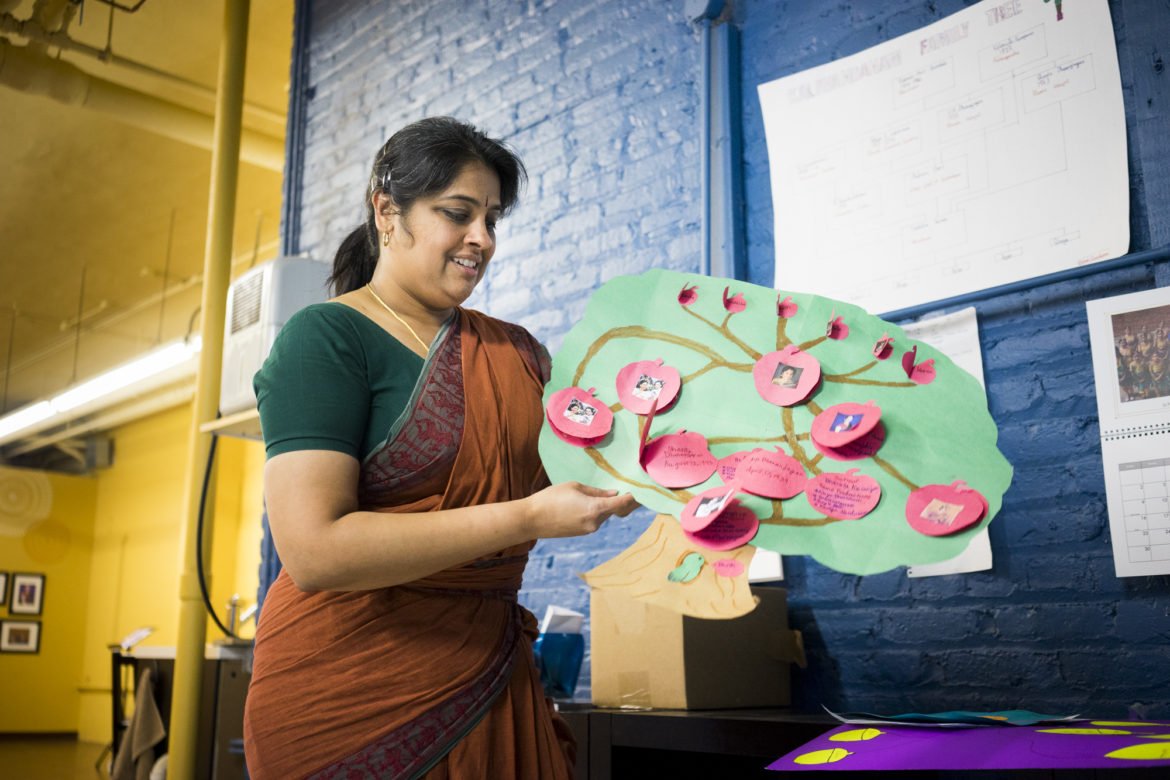 Bharatanatyam instructor Suchitra Sairam shows off some student artwork in her dance studio in St. Paul. Photo by Annabelle Marcovici.

The floors shine in Sairam’s St. Paul dance studio. In order to reach it, she has to descend a narrow stairway into a brightly-painted basement. It’s perfect studio space, Sairam said. She and her students never have to worry about disturbing anyone beneath them with their footwork.

Sairam founded her dance school, Kala Vandanam, in 2002. She teaches Bharatanatyam, a classical Indian dance where the entire body – from the limbs to the hands to the facial expression – is used as a tool for communication.

“There’s a hand gesture that we have (she demonstrates a hands-together motion) that’s very commonly used as a greeting,” she said, “but it’s also a gesture that implies devotion, it implies prayer. Typically, we will use this all the time in performances, because it is either in the context of the piece, or we’re saying thank you to the audience, or whatever.”

But she finds when she performs for people who don’t know much about classical Indian dance that all they see are her hands.

Sairam is a dancer, choreographer, teacher and innovator, and has been practicing her art form for 30 years. She is familiar with the added struggles that come with being a performer presenting what’s considered cultural or “folk” art to a largely uninformed public.

The way things are, she said, Bharatanatyam performances usually happen one of two ways. The first are commonly celebrations and festivals within the Indian community, like at Hindu temple celebrations or other cultural events. But these events usually end up being more about honoring tradition than pushing creative boundaries, which can feel stifling for Sairam’s process.

“It’s often viewed as a culturally specific art,” she said, which helps to preserve community bonds. But as an evolving and expanding discipline, she would like to see more balanced opportunities and greater reach with outside audiences. She wants Bharatanatyam to be taken seriously as a fine art dance form like, say, ballet, tap or jazz.

Second, Bharatanatyam is often consumed by outsiders, but because it’s not as popular as the aforementioned dance styles, it often gets exoticized. Viewers see it as strange or different – a novelty rather than a serious work – and don’t take time to appreciate it in a way they might appreciate more classically Western art forms.

“And so, the challenge there is… how do we demystify it and take out some of the exoticism, so we can just appreciate it for what it is?” Sairam said.

Balancing Bharatanatyam as a treasured part of the Indian community, as well as an art form  that can be enjoyed by anyone, is a difficult needle to thread. On top of that, there’s the issue of visibility. In the artistic landscape of the Twin Cities, there are many more venues that showcase ballet and tap dancers than there are for Bharatanatyam dancers. Sairam would like to give her students the same level of opportunity to perform even while they’re perfecting and reshaping the art form.

“To be able to give them an outlet that is more mainstream, that is more recognized by some outside of a known community, and to attempt over a period of time to demystify and dexoticize,” she said. “[My students] should be completely proud of what they’re doing when they’re studying, what they’re investing in.”

Ballet, tap and jazz have much more visibility than Bharatanatyam, but it doesn’t have to stay that way. Sairam is continuing the work of a long line of artists who are pushing the limits of what Bharatanatyam is and who can appreciate it. Before she could do that, she had to discover and claim the art form for herself, while at the same time sharing it with thousands of years of history and tradition.

Sairam’s journey began when she was 7 years old, living in Texas – right in the age range dancers are normally expected to start lessons. Her mother originally signed her up for Bharatanatyam classes. She remembers those first few months were somewhat less than inspirational.

Six months passed, and eventually, her mother gave her a rundown of her options. She wasn’t going to drive Sairam all the way to class and force her to do something she didn’t even enjoy. If she wanted to, she could quit. Sairam did.

She was 15 when she finally came back to the art form. She was at a community gathering, watching local girls a few years younger than her performing Bharatanatyam. Watching them in that moment, a strangely competitive feeling seized her.

She decided she wanted to take lessons again. Fifteen was much later than most dancers to begin training, and Sairam’s mother told her she’d have to ask a teacher if they were willing to take her if she truly wanted to begin again.

“I really appreciate that she made me take ownership of it at that time,” she said. “I don’t think I understood that at that time.”

It’s a lesson she tries now to pass on to all of her students: ownership. Shreya Mohan of Prior Lake has been training with Sairam for years, and the lesson hasn’t been lost on her.

“It’s something I do for myself now,” she said. “Even when she teaches us a dance, she doesn’t just want us to copy her. She wants us to put our own touch on it.”

Though Sairam is a teacher, she stresses that she’s still a student, first and foremost. She has photos of her own teachers hanging on the wall of her studio, both to keep them with her as she works, and so her students know their own lineage. She has done outreach for the artform through the St. Paul Art Crawl, TPT-MN and Geetmala TV. In 2014, one of Sairam’s students won the Cleveland Thyagaraja Aradhana solo Bharatanatyam competition. She was also named the 2016 State and Regional Ambassador for IndianRaga, an education startup founded at Massachusetts Institute of Technology. 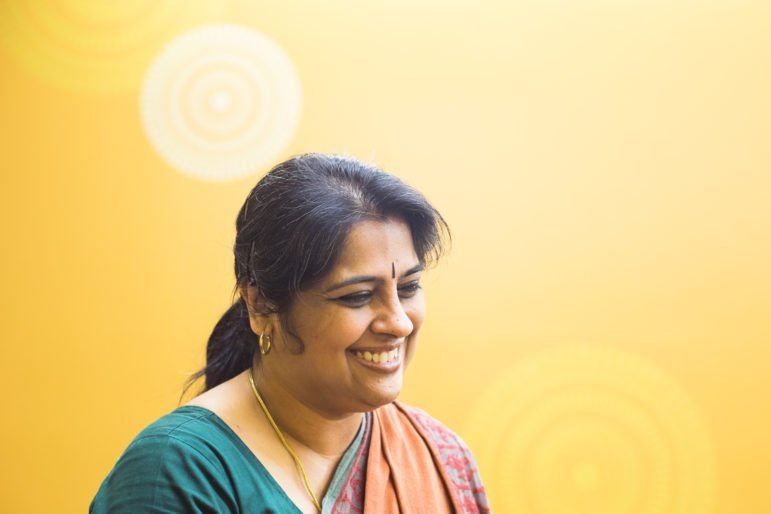 But the concept of “ownership” has never gotten less complicated. Bharatanatyam is steeped in centuries upon centuries of history. There are artworks depicting the dance going back millennia. At its origins, Bharatanatyam is a devotional dance, performed at Hindu temples. It’s often used as a method of storytelling.

But Bharatanatyam is also a modern art, performed by modern artists. Sairam is challenged every day with where to draw the line between tradition and innovation.

Walking that line, she said, has always been difficult, and always will be. But, as she moves through life, grows and changes, that difficulty becomes less and less about the fear of disappointment and more about the challenge of working with a complex medium. She recalls last year, when she was preparing a solo showcase for the St. Paul Art Crawl. Prince died the day before she was supposed to perform. Suddenly, she had a choice to make.

“It’s totally not what you would do, a classical Indian dance to Prince,” she said. At least, that’s what she grew up believing. She kept asking herself what her teachers would think. But she had also grown up a Prince fan, and she wanted to do more than just wear her purple costume. So, after hurried preparations, the next day, she danced to “When Doves Cry.”

The next winter, Sairam produced a full-length piece of her own creation through the 2015 St. Paul Knight Arts Challenge: “Ritu: The Seasons.” The work is a meditation and examination of the six seasons found in India: spring, summer, monsoon season, fall, pre-frost and winter. The dance is equally inspired by 4th-century Indian poetry and 18th-century Italian classical music. Unlike most Bharatanatyam pieces, it isn’t driven by a storyline, it’s completely secular, it made even less use it made even less use of Anjali hasta – the hands together hand gesture.

“I had made the decision that we were just going to use it that one single time in the entirety of the production, she said. “We were going to use it in the curtain call. It was just a – part of it was a personal challenge. It’s always silly, but it’s just a tiny little thing to just test myself. And there it was, all the way at the curtain call. And maybe nobody else noticed. I told the girls, and I told them why I wanted to do that. Every aspect of this, I wanted to be secular. Every aspect, I wanted to just be experiential.”

What was also different about this performance was the mix of people that attended who could enjoy the traditional aspect and be challenged by the contemporary nuance.

“It was interesting to me how many people who considered themselves familiar with the artform had never seen it performed outside of the context of some sort of Hindu mythological story,” she said. “It was nice to be able to share the art form with a lot of people who had never seen it before, so they experienced it one way, and then people who were familiar with the art came and experienced it in a different way, but they also saw something new.”

A few people who had never seen Bharatanatyam before came to her after the show and told her it changed how they thought about the seasons. Mohan, who performs in “Ritu,” got some of the same reactions.

“Everyone said it was really beautiful and really inspirational,” she said.

Sairam is always thinking about her next creative project. Her next full-length production, she said, might be another secular work. She might use dance to examine the variety of relationships between different people – not in the “right vs. wrong” way popularized in mythology, but in the gray, muddy way of modern human relationships. She’s turning to her students for the relationships and ideas that are important in their lives, right here and right now.

“Because if my goal is really to give them different platforms and help them with ownership of their journey and all that, shouldn’t we also be creating and working with content that is meaningful for their generation?” she said.

For her part, Mohan is making it her goal to make Bharatanatyam as commonly recognized as ballet and tap. She wants her friends to know immediately what she’s talking about when she tells them what she does with her spare time. In the meantime, she’s discovering more about who she is, and what she’s capable of.

“Suchitra’s really passionate, and she wants everyone to meet their full potential,” she said. “She also wants us to discover ourselves.”

Correction: A previous version of this article stated that Suchitra Sairam won the 2014 Cleveland Thyagaraja Aradhana solo Bharatanatyam competition. This article has been corrected to show that one of Sairam’s students won that competition.