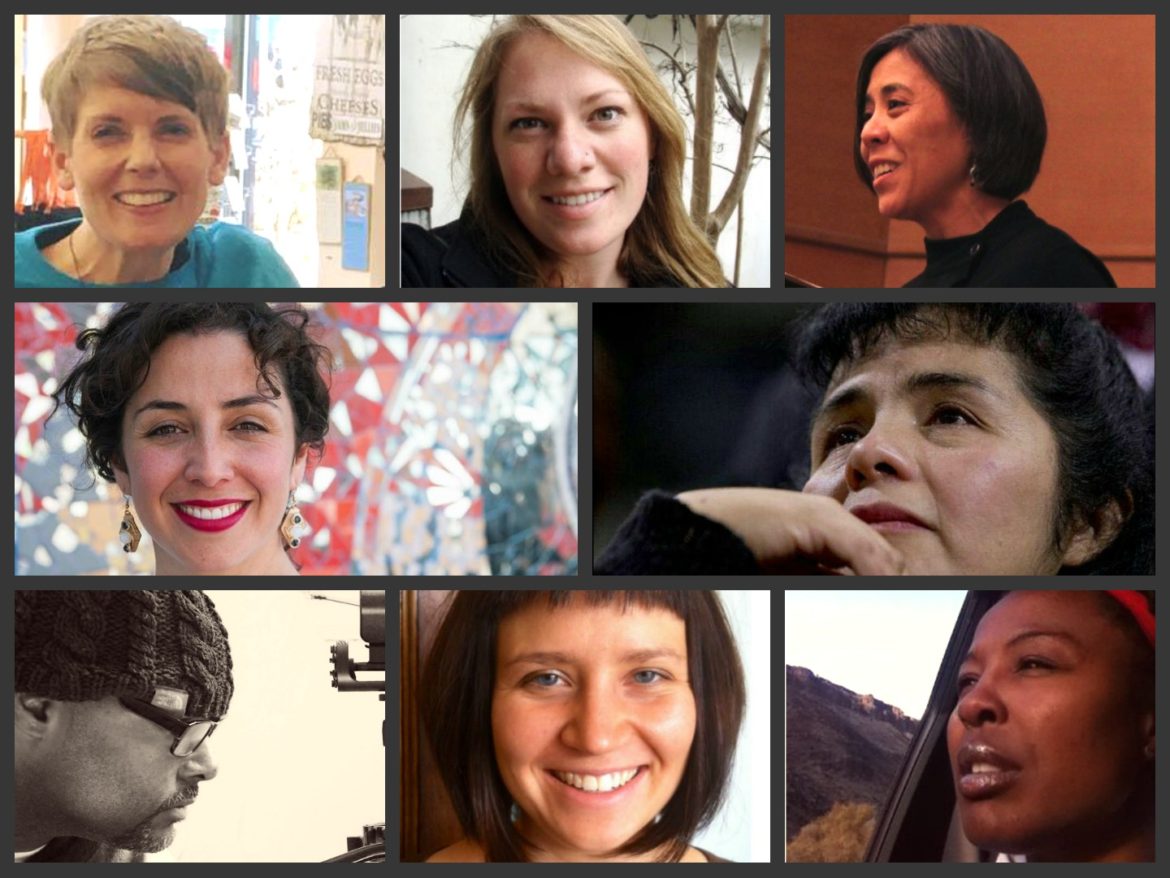 This was not an easy article to compose. I, like many of the individuals I talked with, am still devastated by the results of last week’s elections. But waiting to speak is not a luxury we’ve been gifted – our undocumented community members, school kids wearing hijab, trans friends and female relatives are facing heightened threats of violence and have until Jan. 20 to come up with a safety plan for the next four years. For folks organizing on the ground, the election results mean doubling down on the work they are already doing. Housing justice, immigration advocacy, reproductive rights, racial equity – these efforts continue to build, even while we brace for an ugly new reality.

In the coming days of a Donald Trump presidency, here are the steps we can take to increase our work capacity and to keep each other safe.

The safety pin challenge flooded social media last week after reports of a “yuge” surge in Twin Cities hate crimes. Safety pins are supposed to symbolize solidarity with marginalized folks and began in London after “Brexit” cut the European Union off from the United Kingdom. For Americans – who took to the trend in an effort to stand up to emboldened Trump supporters – the safety pin activated “in spirit” allyship where if an attack was ensuing they’d intervene, or so they said. Almost immediately following the wave of safety pin enthusiasm came a sobering retract. People of color went online to dispel the myth of a spirited safety pin arguing that Trump comes at a higher cost to all of us.

“Progressives who have been supporters ‘in spirit’ are seeing that spirit doesn’t go far and they need to act, open their eyes, look for opportunities to be more engaged and put their money and energy where their mouth is,” said Minneapolis-based policy analyst Sarah Goodspeed. “New advocates can be useful if organized behind POC-led groups who have fought these uphill battles already over many years and keep true community solutions at the forefront.”

The work of privileged people (formerly known as spirit allies) is constantly to unlearn their biases and relinquish their undeserved power. This work involves lots of action, trust building and consistency. But more than that, this work involves humility. Once over privileged people learn their destiny is intricately and inevitably linked to everyone else’s they’ll act out of their own urgency of survival and not out of charity. 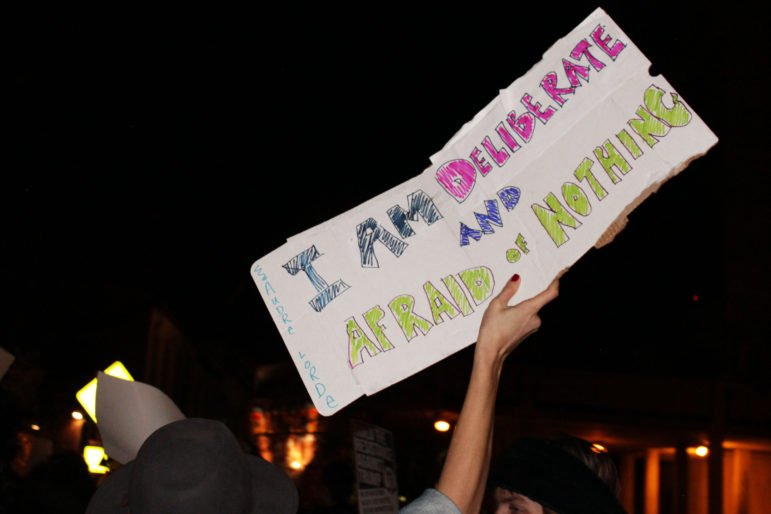 A protester marches toward Interstate 94 in Minneapolis during an anti-Trump protest on Thursday, Nov. 10. Photo by Nikki Rykhus.

2. When we vote our progressive politicians in, don’t abandon them in a toxic environment.

However, these and other progressive officials are now in the minority even within their own party. If they’re sent into the lion’s den with no back-up, how can we expect them to do their jobs? Government has to be participatory, Maye Quade said.

For communities fighting against oppression in any of its forms, supporting our elected officials and holding them to their word is key. This requires us to be present where decisions are made, aware of the what is happening, translating information back to our communities, holding elected officials accountable to what they promise and standing with our allies at all levels of government.

“If our executive branch of government is not pushing our agenda, we are going to at least have to have say-so with our local Legislature. I think people agree and see that they maybe have a little more power and more social capital themselves and more value in those relationships they develop with those community members and those local people,” said Princess Titus, director of education and training with Appetite for Change and a Minneapolis educator.

Did you use the words "white supremacy", "misogyny", "antisemitism" or Islamophobia in face to face conversations today?

By privilege I don’t just mean cis-gender able bodied straight white males (though traditionally this group comes with the heaviest set of baggage). By privilege I also mean non-Black, fair skinned, mulit-racial/ethnic people of color. I mean Black men and white women. I mean Christians, fluent English speakers, (some) college educated and economically secure folks. I mean documented people and U.S. citizens. I mean all of us who suffer relatively less because in one way or another we act out our internalized supremacy on each other. In order for us to heal and dismantle hierarchies of oppression we’ve got to hold each other accountable, all of the time.

Artist and organizer Lula Saleh aptly pointed out, “to people with race, gender, faith or economic privilege: Be conscious and aware of your actions, thoughts and words. Try to take up less space. Try to listen more. Just be more aware of yourself and your blind spots. Have more compassion and try to be less arrogant about your work and allyship, if you are indeed an ally. This is not about you, because ultimately, when push comes to shove, your privilege WILL save you. Also, teach and talk to your people, because we people of color, Muslims and immigrants are exhausted with having to do that.”

The time to teach your people has never been more urgent. Thanksgiving is coming up, please seize the opportunity to have these courageous conversations.

4. Put your money where your mouth is.

Money is vital to the success of community work. With fundraisers like Give to the Max Day and other recurring crowd funds, there is no easier time to contribute financially to a cause you believe in. Donating is something people all over the country are doing to organizations like Planned Parenthood and the ACLU. In Minnesota, organizations like NavigateMN, Nursing Students for Sexual and Reproductive Health and additional groups are seeking donations to continue their work, even if state or federal laws change dramatically.

“We need to build capacity from our community. We need people to stand up against hate and xenophobia, who know our stories, to stand up for us. We need direct investment, because we need to revamp. A safe community is an organized one,” said Emilia Gonzalez Avalos, executive director of Navigate MN.

Organizations like the Main Street Alliance are asking consumers to shop small businesses over the coming holiday season, because many of those small businesses best represent the values and interests of Minnesota’s marginalized communities.

“The small business owners I work with, they are fervent in their values and their opinions and what they choose to support in the community has not changed and so their values are the same,” said Corrine Horowitz, Minnesota state director of the Main Street Alliance.

Simultaneously, Antonia Alvarez, co-founder of La Asamblea de Derechos Civiles, is calling for an economic boycott of large businesses in order for the local Latino communities to both save their money, in case of emergency raid or deportation and center their economic impact for politicians to understand.

Already these actions are being put to the test, like on Nov. 16 when a GoFundMe was created for Marco Cruz Blanco, a Twin Cities organizer detained by Immigration and Customs Enforcement (ICE) just the day before. In just a few hours, community members raised over $15,000 – far and above the original request of $10,000. 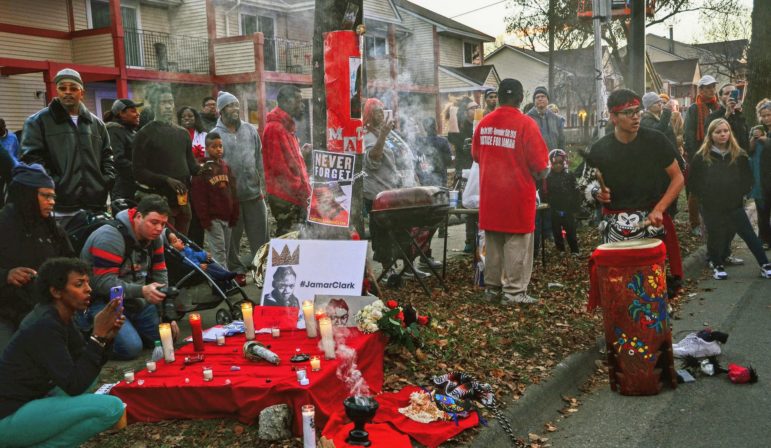 Community members hold an anniversary vigil for Jamar Clark on Nov. 15, 2016 at the street corner where he was shot by Minneapolis Police. Photo by Mark Peterson.

5. Pivot back to the hyper-local.

Trump’s first 100 days plan is riddled with threats to the safety and survival of many Minnesotan communities: mass deportations, increases to fund “law and order” policing, restarting oil pipeline plans and more.

“[Trump’s plan] makes me want to pull closer to the work that I am doing on the municipal level to make sure we are building a base from the ground up, to change things at the local level and to be prepared to make bigger changes,” said Minneapolis-based artist-organizer Ashley Fairbanks.

If you want a $15 minimum wage, if you want justice for victims of police brutality, if you want renters to have safe and affordable homes, if you want women to control how they care for their own bodies, show up locally. These are just some of many initiatives being worked on right now in Minnesota. Trump may be in office through 2020, but Minneapolis and St. Paul have elections in 2017. Mid-term elections (both statewide and nationally) will be held in 2018.

“It doesn’t mean we’re going to take our eyes off the change that needs to happen at other levels, but we can build together at a very local, very grassroots level,” said Vina Kay, executive director at Voices for Racial Justice.

“People should be showing up to any and all meetings, because every meeting’s conversation is slightly different, but there is always a role to be played,” said Minneapolis City Council Member Alondra Cano. “It means hyper-engagement for us, we need to be present, ready and available at all times. Because we do not know what is coming next.”

6. Prepare for the worst.

“It is hard to predict the impact of last week’s election. Some parts are easy to predict. We know that DACA and DAPA will probably be rolled back, increased deportations, we don’t know what that means for people’s willingness to organize. We don’t know if there will be crackdowns on organizers, on people doing the work. I think right now all we can do is have an emergency plan,” said Jennifer Arnold, co-founder and co-director of Inquilinxs Unidxs por Justicia.

For some in the Twin Cities, last week’s election means regrouping and really considering the impacts that the election will have on organizing work.

For other communities, preparing for the potential worsts has nothing to do with what could be coming and has everything to do with what has been promised. Undocumented communities from across the Twin Cities and their allies are organizing around Minneapolis and St. Paul’s statuses as sanctuary cities, cities that have agreed to protect undocumented immigrants, though there is no existing legal definition or single understanding of what a sanctuary city does. They are asking that public officials not only refuse to work with ICE, but that ICE be prevented from operating in Minneapolis in any capacity. For many of these organizers, churches and other faith-based groups are another potential sanctuary for undocumented immigrants in Minnesota.

“If you have a church community, talk about what it means to be actually stand by people’s side when they are facing deportation. It is really hard to think about,” Arnold said.

We do not know what the next years will really look like. As community members, organizers and leaders, we are – in many ways – navigating uncharted waters in the work we do and how we do it.

And yet, everyone I spoke to this week said to hold on to one another, to break bread with your community, know your neighbor, grow food, donate money and time, hold yourself accountable to the work and hold those around you accountable too. Take the time to grieve and heal, but do not let that grief keep you from acting, speak even if your voice shakes. Be present where you are needed, and stand back when you are in the way.

We will survive the next four years, but only if we hold on to each other.

Cristeta Boarini and Caroline Taiwo contributed to this report.

Correction Nov. 18, 2016: A previous version of this article misstated the title of Ashley Fairbanks and the name of Emilia Gonzalez Avalos. These have been corrected.