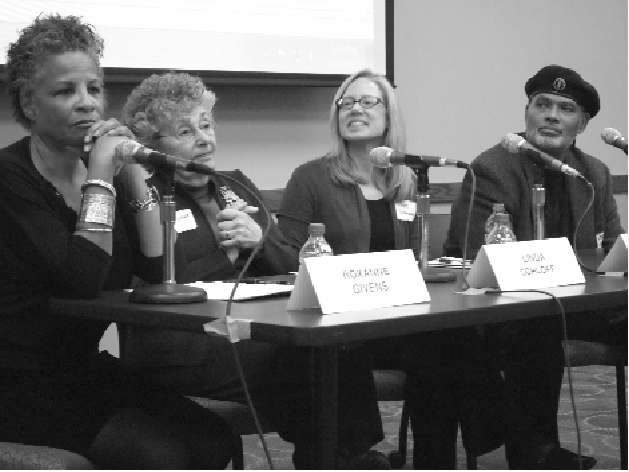 They sponsored a panel discussion, “Cornerstones and Common Ground: Reflections on the History of North Minneapolis” Feb. 23 at UROC, the U’s Urban Research and Outreach/Engagement Center, 2001 Plymouth Avenue, and say they are seeking ways to capture additional oral history of the community.

Already, there are numerous video segments “that didn’t make the cut” posted on UROC’s website, at uroc.umn.edu/cornerstones/ and there are plans to collect more stories at an event at the Capri Theater June 10. Bergin noted there have been youth-made media projects that should not be left out.

As often happens with panel discussions, time for audience comments was brief, but included the following:

T. Williams recalled presiding over the sale of the old Phyllis Wheatley community center [?] building and the development of the building where it’s housed now, and resisting the United Way’s desire to merge all Northside “settlement houses.” He noted the start of the Urban Coalition which lasted 20 years, and the location of a Control Data Northside plant.

Willie Dominguez remembered “a vibrant West Broadway with a big parade, and queens – you still look beautiful. It brought a diverse community together. A carnival at North Commons, biggest in the state, up to the 80s. The days of a lot of commerce on West Broadway, that’s missing today.”

Susan Breedlove talked about students’ hunger for history and how they clamor to go on bus tours that she organizes.

Jeannie Pettiford, at 93, recalled cooking for visiting black performers who stayed at Phyllis Wheatley because they were banned from downtown hotels.

A gentleman who said “we love the Northside beyond hope, when you’re a Northsider, you’re a Northsider,” recalled walking everywhere, to North High School, but “the neighborhoods are scary now.” He said he’d like to see more about North High’s history, and what bothers him most is parents taking their kids out of local schools.

Mel Reeves wanted to hear more about the struggles, the real estate covenants. He pointed out that Zion Baptist Church was a black church built to be a black church. The film talked about synagogues that were eventually converted to black churches.

In introducing the panelists, Bergin talked about “pathology reported disproportionately” and said he wasn’t so much talking about today, but the Star and Tribune headlines of the 1940s and 1950s.

He mentioned a segment on “The U and The Way” that didn’t make the hour program, but is on the website. In it, Mahmoud El Kati talks about how students from the African American Action Committee, connected to The Way community center, agitated for and got a Black Studies department (more permanent than a program). “It democratized” the University, “opened the doors for everybody.”

Architecture associate professor Katherine Solomonson’s history with North Minneapolis dates back to 1993, the time of the Holman vs. Cisneros lawsuit. She commented on the archeological excavations they did to study the site of “the projects” finding clay pits, native hunting grounds, then industry and single family homes. Then in the 1930s, that was “complete erased. We hear the term ‘erasure’ in the film and it’s twice now.” The original “projects” took out businesses and single family homes, and had flat roofs. In the new Heritage Park project, roofs are pitched.

“Each was based in very distinctive ideas on how people should live. The 1930s projects were small units so there could be no extended families,” Solomonson said.

Panelist Linda Schloff, past executive director of the Jewish Historical Society of the Upper Midwest, said she thought North High “wasn’t given enough space” in the documentary. It was there and on Plymouth Avenue where people could meet. They could have talked about the communists and the socialists, “in Margolis’ garage was maybe the start of the DFL.” And there were juvenile delinquents, “The Combination,” a group of youth from Jewish and another heritage. No one will talk about the prostitutes, she said, or the loan societies that formed to avoid the need to use banks.

“There was a home where you could leave your child if you were having economic trouble, yet they could stay a part of their community.” Though not a direct outgrowth, it’s now Avenues for Homeless Youth. Schloff added that the JHSUM is currently researching the exodus of Jews, “why did Jews move out if this was so wonderful?”

Roxanne Givens, entrepreneur and philanthropist who co-founded the Minnesota African American Museum and Cultural Center, said it is important to capture the lessons of history or be bound to repeat it. An important theme for her is ownership – there used to be stores owned by African Americans, “we don’t own anything anymore.” She said life is about collaboration, and “Minneapolis won’t be a healthy city ‘til all can participate in its benefits. The greatest good for the greatest number.”