While I’m glad that the government didn’t shut down, I’m really quite worried about the tone President Obama took in the aftermath.  First, this wasn’t a victory of any kind.  The Republicans forced cuts of $38 billion upon which they piled $150 billion in tax cuts for the wealthiest 5% of Americans (extending the Bush tax cuts).  So to keep government running for a little while, we pile an additional $112 billion on to the debt heap?  Pointing out the Republican hypocrisy seems rather useless when the Democrats go along with it.

President Obama’s Deficit Commission is all smoke and mirrors. Its members are making a big show of laboring over “painful” choices and considering all options in their quest to bring down the deficit. But inside the Beltway everyone knows what’s going to happen: The commission will reduce the deficit on the backs of the old and the poor, through cuts to Social Security, Medicare, and Medicaid. Some opponents have taken to calling it the Cat Food Commission, since that’s what its victims will be forced to eat once the commission gets done slashing away at their modest entitlements.

Obama filled it with politicos who push the lie that Social Security is bankrupting America.  In the next breathe, they then suggest we get rid of Medicaid and Medicare.  Paul Krugman calls this the zomibie lie:

On Social Security, [Catfood Commission Chair Alan] Simpson is repeating a zombie lie – that is, one of those misstatements that keeps being debunked, but keeps coming back.

Specifically, Simpson has resurrected the old nonsense about how Social Security will be bankrupt as soon as payroll tax revenues fall short of benefit payments, never mind the quarter century of surpluses that came first.

We went through all this at length back in 2005, but let me do this yet again.

Social Security is a government program funded by a dedicated tax. There are two ways to look at this. First, you can simply view the program as part of the general federal budget, with the the dedicated tax bit just a formality. And there’s a lot to be said for that point of view; if you take it, benefits are a federal cost, payroll taxes a source of revenue, and they don’t really have anything to do with each other.

So … did Obama establish the Catfood Commission so that at some later point (now), he can introduce the concept that we ought to cut Medicare, Medicaid and Social Security?

Anyone who understands messaging and framing knows that the first thing you do is get everyone else talking about it.  Tom Tomorrow sums it all up beautifully: 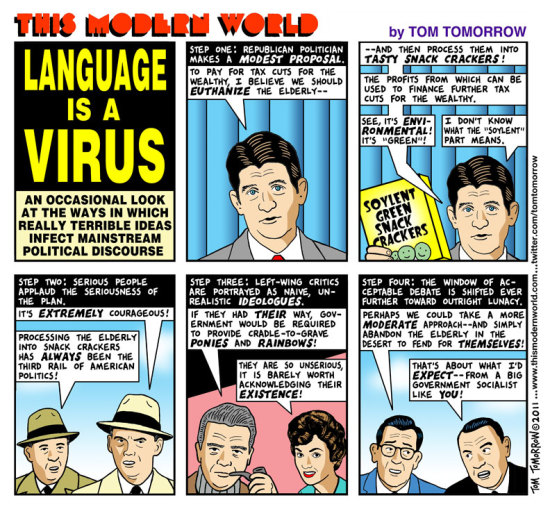 Instead of talking about the following facts:

We’re talking about cutting Medicare, Medicaid and Social Security based upon the premise that tax increases upon the wealthiest 5% and corporations who pay no taxes is off the table.  Who stole Candidate Obama and replaced him with someone I can’t recognize from his prior rhetoric?