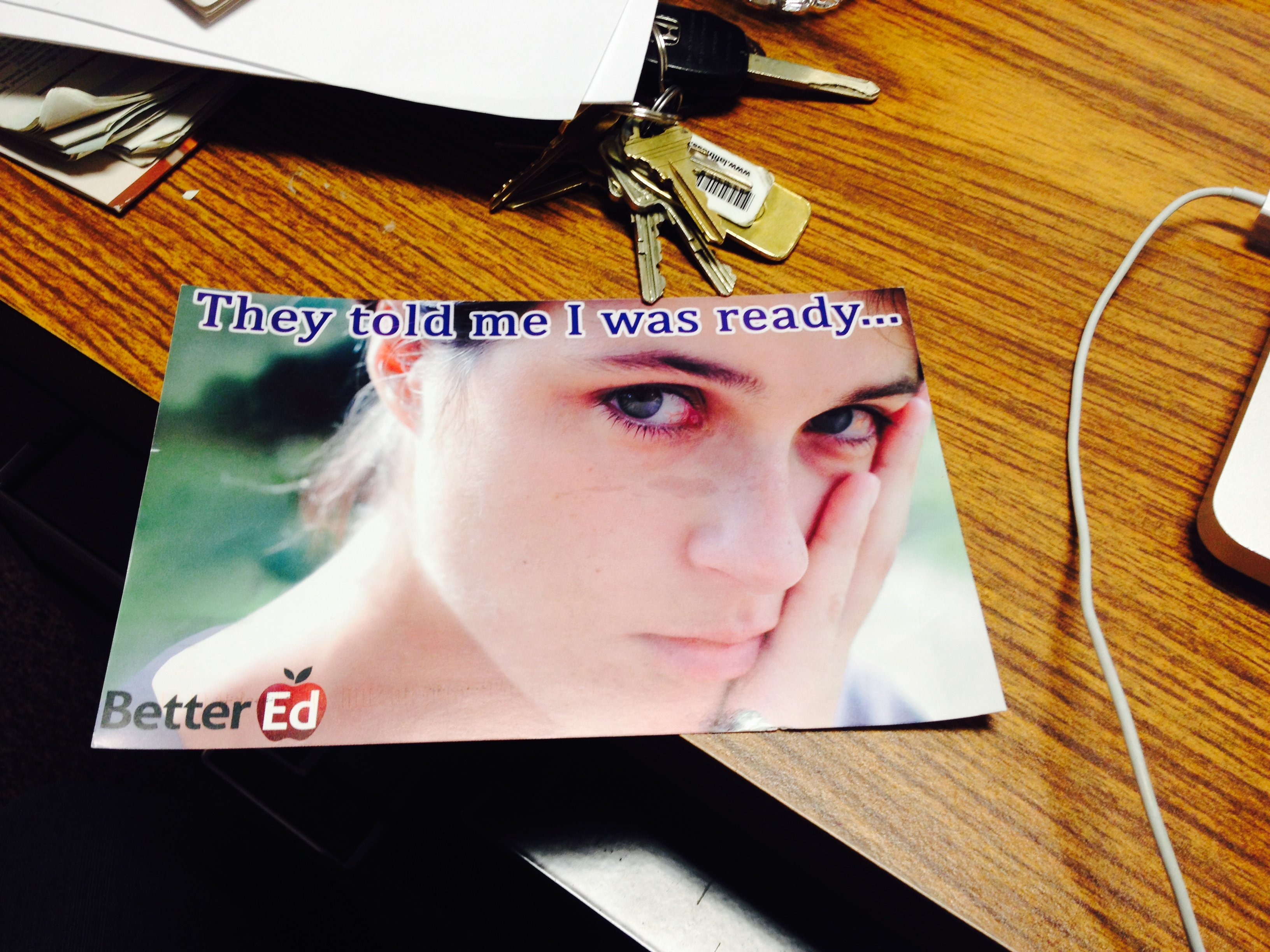 A Minnesota group calling itself “Better Ed” should know better than to distribute misleading statistics. Perhaps even worse than the original act of distributing a postcard with inaccurate statistics is an email acknowledgement that these folks know the statistics are not accurate! Here’s the story, along with reactions from a few Minnesota superintendents whose high schools are highlighted on Better Ed’s postcard.

Those high schools were cited on a postcard and in an email that Better Ed distributed with a headline, “They told me I was ready…” and a picture of a youngster who looks sad. The postcard lists statistics from 19 area high schools, titling those statistics “Public High School Graduates Who Need Remedial Classes in College.” The words “Remedial Classes” are in red.  A portion of the post card is shown below. 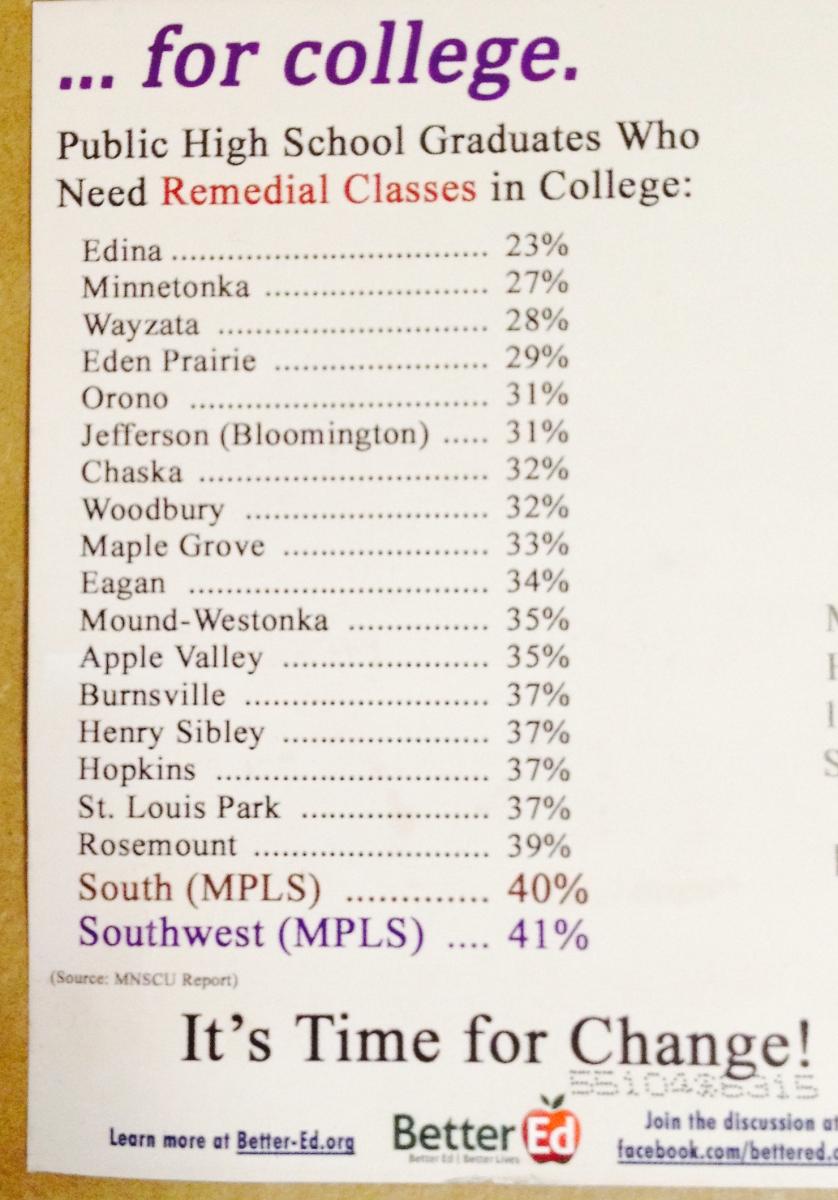 The statistics come from a report I’ve written about, Getting Prepared, 2011. The University of Minnesota and the Minnesota State Colleges and Universities System produced the study.  See http://hometownsource.com/2013/12/18/joe-nathan-column-vitally-important-state-report-almost-3-years-late/

Better Ed’s mistake is in badly misrepresenting the percentage of “public high school graduates who need remedial classes in college.”

Their figures are inaccurate, first, because the Getting Prepared report covers only Minnesota public colleges and universities. So it does not include the Minnesota private or out-of-state public or private colleges that many Minnesota high school graduates attend. Thus, Better Ed’s postcard is wrong: We don’t know overall, how many or what percentage of graduates from these high schools took remedial courses.

Better Ed says that 23 percent of Edina’s graduates need to take remedial courses in college. The Getting Prepared report actually says that 8 percent, not 23, of Edina’s graduates took remedial courses at a Minnesota public college or university.  Why this huge difference – 23 percent versus 8 percent, 40 percent versus 21 percent? The postcard inaccurately uses figures from the report.

Better Ed did the same thing with 17 suburban public high schools.  For example, 2,599 students graduated from Edina High School in 2005-2009.  Of those 2,599 students, 892 (34%) enrolled in a Minnesota Public College or University.  Of those 892, 208 took one or more remedial courses.   That’s 8 percent of the overall Edina graduate pool (2599), which is what Better Ed says it is describing. It is 23% of the Edina graduates who entered a Minnesota public college or university.  It is the same situation for all the schools listed.

Better Ed’s post card says it is listing the percentage of “Public High School Graduates Who Need Remedial Classes in College.”   No it’s not.

The postcard is being distributed both directly through the mail and via email. Better Ed officials declined to tell me how many postcards were mailed. In text below the emailed card, Better Ed Director Daniel J. Lattier, wrote, in part, “the percentages only refer to those graduates who attend in-state public colleges and universities.” So he should know the assertion on the postcard is not accurate: “Public High School Graduates Who Need Remedial Classes in College.” Lattier defended Better Ed’s assertions by citing national, not Minnesota, statistics.

In a subsequent email responding to questions about the postcard, Lattier wrote, in part: “As you can see in the email we sent out below, we are aware of the nuances of the report. We have a limited amount of space on these postcards, and decided as a staff that the space did not allow for a significant qualification of the numbers.”

In a later email, Devin Foley, Better Ed president, wrote in part: “With our postcard we merely joined with the voices of other concerned community leaders, such as the DFL chairs of the Education Finance and Education Policy committees — Paul Marquart and Carlos Mariani — who bemoaned the situation of ‘almost half of our graduates needing to take remedial classes upon entering college.’ This quote appeared in a longer column published last September in the Star Tribune.”

The Getting Prepared report showed that 53 percent of students who graduated in 2008 entered a Minnesota public college or university within two years of graduating from high school. Of those students, 40 percent took one or more remedial courses. So the figures in the Star Tribune column also need clarification. But “two wrongs don’t make a right.”

I asked officials from several districts named on the postcard to comment.  Rachel Hicks of the Minneapolis Public Schools said the district “was not interested” in responding.

Minnetonka Superintendent Dennis Peterson explained: “Minnetonka made solid progress from the previous reports to the 2010 report (released January 2011), where we show 11 percent of those Minnetonka graduates who attend Minnesota public colleges have taken ‘remedial’ courses. That 11 percent represents the percentage of total graduates who took one or more ‘remedial’ courses. We also know that the earlier years in the timeframe used were higher than the later years. Furthermore, as we investigated these designations of remedial courses over the years, it has been clear that many of them are not truly remedial but are different expectations from what the state and our district had during those periods.

“The data since 2010 is expected to be even more favorable as the percentage of our graduates scoring at high levels on the ACT and SAT tests are much higher. For example, the 2013 class had the highest ACT average in Minnetonka history and one of the highest averages for any Minnesota public high school ever. The ACT calculations showed that 80 percent of our ACT test-takers for 2013 were ready for college-level work in all four areas of their sub-tests. We also have about half of our students going out-of-state for college and a good percentage going to Minnesota private colleges.”

Ric Dressen, Edina superintendent, commented: “In Edina we are in the midst of implementing our strategic plan to create the Next Generation of Edina Public Schools. This plan places a high value in the use of accurate data to assess progress and the commitment to grow our educational partnerships with our post-secondary colleagues and institutions. It is important that we use data not to divide our organizations and create more silos, but rather to find out how best to build a progressive educational experience from early childhood through college, so that all Minnesota students are well-positioned for the changing world that awaits them.”

Les Fujitake, Bloomington superintendent, told me: “Developmental classes, in the vast majority of cases, are positive. Students should be applauded and encouraged for doing what is needed to help meet the increasing demand for college graduates required to sustain and grow Minnesota’s economy.

“Highlighting a single percentage from a research report paints an incomplete picture, and representing that the percentage applies to all high school graduates is inaccurate and misleading.

“The term ‘college’ means universities, state colleges, two-year community and technical colleges. The single percentage cited does not show that almost all University of Minnesota students did not need to take a developmental course. It also doesn’t show that the percentage of students taking developmental courses have been declining at the University of Minnesota and other Minnesota universities.   The data shows that the majority of students who take developmental courses attend two-year community and technical colleges. Increasingly, more people are enrolling in these institutions to facilitate a move to a new career, to strengthen needed skills, and/or to earn a college degree. Some of these enrollees may have been out of high school for a year or more, increasing the possibility of losing skills they once had mastered. Most students need only one developmental course, most often in mathematics, because research shows that there is a natural fading of math skills the longer a student is out of school.”

Fujitake concluded, “Our real focus should be on helping all students identify their goals, measure their strengths and prepare them for whatever college or career path they choose.”

Mark Parr, director of secondary education for the Rosemount-Apple Valley-Eagan District, responded: “We understand that some students will need remediation upon entering a post-secondary institution. We also understand that there are inconsistent reports of what percentages of students require remediation. Our goal is and will always be to prepare students to the best of our ability for college and career readiness. We continuously strive to improve our instructional methods in that regard. We encourage our students to consider enrollment into a post-high school institution as well as encourage them to be as prepared as possible for that kind of rigor.”

Ironically, Better Ed’s email also provided a link to a column that I wrote about the Getting Prepared report in December.  Yes, as I wrote, too many Minnesota high school graduates take remedial courses on entering our public colleges and universities.  But it  is not nearly as high a percentage of the total number of graduates as Better Ed reports.

Better Ed’s use (or, I think) misuse of the data is another reminder that, as state law requires, the Minnesota Department of Education should produce the report yearly. (The last available report was issued in 2011.)