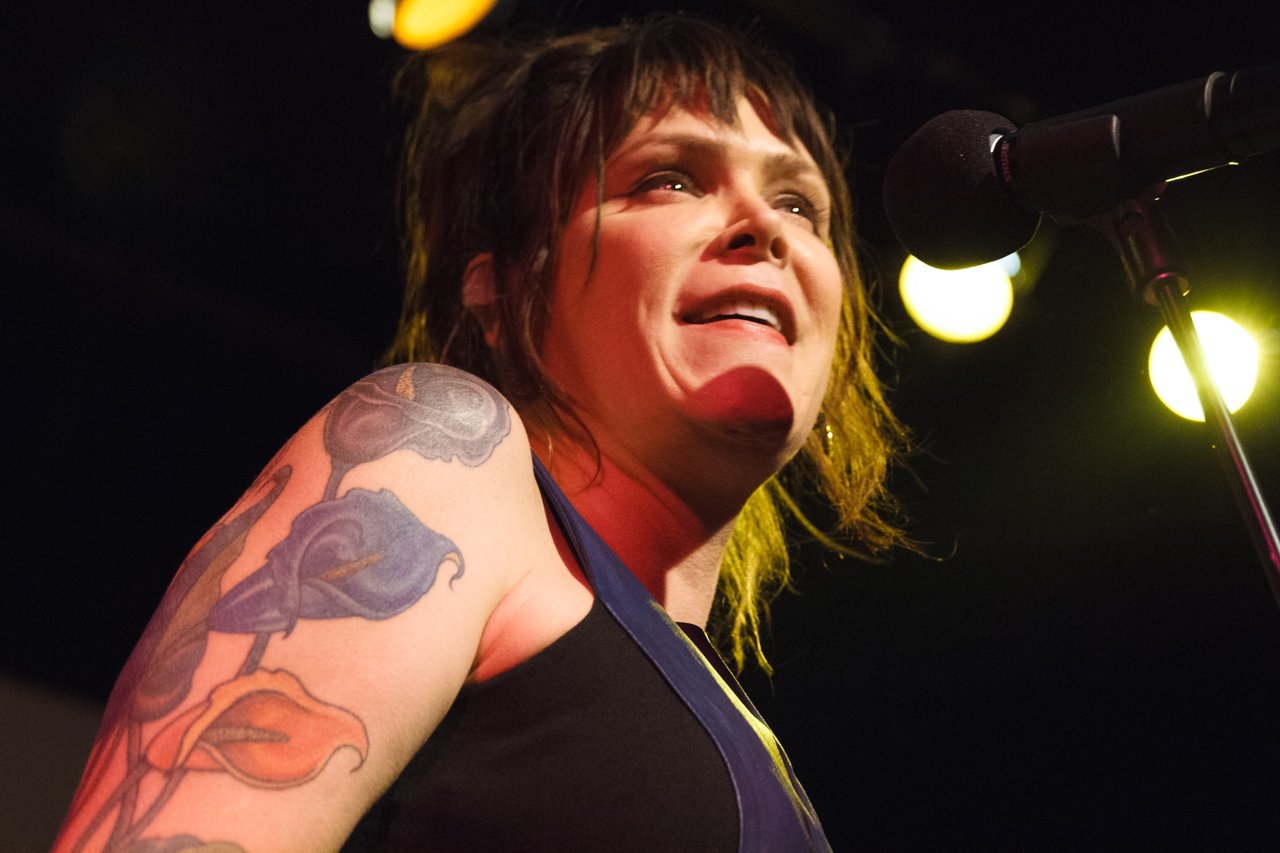 Beth Hart at the Cedar Cultural Center in Minneapolis, MN

On February 19, 2015, Beth Hart made a stop in Minneapolis, MN to perform the 3rd night of her Better Than Home World Tour at the Cedar Cultural Center. She was generous enough to sit down with me before the show and chat a bit about her life as a touring musician and the upcoming release of her new album. I talked to several people at the show who said Beth’s music was significant in getting them through some tough life experiences. She has a gift of being able to communicate through her song writing what she has learned along her own life path and told me that she is an open book, so I hope you get a sense of that from this interview.

TCDP: There will surely be Blues fans in the audience tonight.  Are you happy with the newish direction of your career that finds you playing to more of a Blues loving audience and is that a good fit for you?

BH: I did the Rock thing and the Singer/Songwriter thing and once in a while I’d write a Blues or Gospel song and this went on in my career for years. When I did the first record with Joe Bonamassa Don’t Explain, I was so taken aback by how much I loved it and I was really surprised that I didn’t feel like I was doing a bad job. I felt like what I was offering was sincere and that really surprised me because I’ve loved that music for so long, but never would I really attempt to go there as my own singer. What’s funny is I don’t know if the timbre of my voice had changed a bit with age, but it’s the first time I actually enjoyed hearing my voice come back on a recording. Prior to that, I wouldn’t really listen to my records so much, only for production or a writing standpoint, but not really to enjoy my voice. It was so inspiring that I actually started writing more in that direction and did the Bang Bang Boom Boom record, which was really exciting, kind of like starting my career all over again.

In terms of the audience, I get a split audience anyway since I’ve been so spread out genre wise so I don’t feel like that changed much, it’s just the feeling I have on stage has changed I think because the music has shifted.

TCDP: You’ve had notable success overseas in New Zealand and the Netherlands for example. How does performing there compare to the US?

BH: I had a career here in my 20s and then it ended due to some personal problems. When I got around to getting myself together and ready to go back out to work again, I didn’t really have any opportunities left here nor did I really anywhere else. A few territories were immediate in bringing me on, New Zealand and Holland. Those were the two places in the world. So when I jumped back into working, I was very thankful that it immediately went very good, but it wouldn’t move beyond those areas because I didn’t have a record deal outside that. Then about a year and a half later it segwayed into Denmark and stayed there for another three years, then into Norway and Germany. When I did the My California record it opened up England, then when I worked with Joe that opened up France. The Label I was working with for all those places opened up a label here in the US and that only happened a handful of years ago, so I didn’t start touring back here until then. I think it’s just because I’ve been working there and building up a fan base that it’s so much larger there then here. I think that now that I have an opportunity to work here, I really believe in myself and the band that we will build up a nice following here, but we have to be patient, we have to work hard and always luck is a little bit involved, but I have faith in ourselves and will have fun chasing it.

TCDP: You seem very at home performing solo on the piano?  Do you find you’re able to be more expressive that way compared to fronting the full band?

BH: Absolutely. When I’m alone at the piano, my really big focus is I know the audience is going to hear every word of that lyric and so it’s really a time to open up and be as vulnerable and really in the middle of that story as possible. Just like if you’re in the middle of writing it, so focused you’re so in the center of it and that’s how it’s got to be when I’m playing it live. I would do that all night long, but I sometimes think that would be boring for the audience and I don’t want the show to ever be a one note, but there’s something to be said for when you just get to sit down and really give them that story and they know exactly what you’re saying to them. I love that.

TCDP: You’ve been invited to perform with some big name guitarists (Jeff Beck, Joe Bonamassa, Buddy Guy, Slash) who are used to being the marquee performer.  Do you find yourself having to dial-it-back in order to not steal the spotlight?

BH: I’ve been really, really lucky with Jeff, Slash, Joe and Buddy, all four of them are the most humble, feet on the ground, total team players. I can’t stress that enough, team players all the way. There is no dictating, there is no ego and I wouldn’t be surprised it’s a big part of the reason why they’ve had success, because let’s face it, what is talent? It’s like beauty, it’s really in the eye of the beholder. So no one’s wrong and no one’s right, it’s just how the person reacts to that artist. I just think a big part of why they shine is because they are aware that it’s all about the team. We learn from each other, grow from each other, create our work with each other. Even if you’re the sole songwriter of all your stuff, you’re still being affected by everyone in your life. They’ve been totally easy to work with, they’re great.

TCDP: Congratulations on the new album.  What was different about your approach to song writing this time and was it a good experience?

BH: It’s funny, I didn’t make a Blues record as such this time. I made a record that has a touch of Gospel and Soul influence, some Rock influence, but it’s more back to a singer/songwriter kind of thing. Not so much musically, but lyrically very much based on a narrative of stories and life experiences. Looking back and looking forward and being in a vulnerable state. This record was a big challenge because I didn’t really want to make a record like this, I wanted to stay in the Blues and the Soul feel because I was just getting started on that. On this record, the two producers that I worked with really stressed me doing the more vocal stuff. The reason why I didn’t want to do that is because it’s more painful to write that way. I don’t mean (literally) writing about pain, I mean to really open up and look at myself and how I really feel because one of the great things about being in denial is you don’t have to fiddle with what’s underneath. The producers worked with me for a year on this and were so patient and so lovely, but adamant on me telling a story – so I did it. Along the way I was surprised with how much I enjoyed digging in.

TCDP: Do you have a favorite memory of how a specific song came together for this album or total catalog?

BH: The songs that come together really fast are like you didn’t write them, they just literally flow through. Those aren’t my favorites. Some of my favorites really are the labors. I discovered that the reason why I labor when it’s a long period that it takes a song to be written is simply because I’m afraid to tell the truth about a matter that I know the answer’s there, but I just don’t want to face it. When you know you labored over something, it’s so much more fulfilling when it’s finished and you know you finally got to that truth like in Sky Full of Clover, which took me several years to write and it’s just a Gospel song. It doesn’t have a bunch of changes, but getting that right true lyric. The lyric that I wanted more than anything to come across in that was facing God again with so little faith, but somehow figuring out how in those 3 to 4 minutes I could come in front of him with both my humility, fear, faith and devotion all at the same time and how to get that in an honest balance.

TCDP: What do you hope to achieve with the new album to consider it a success (for example reach new listeners, win awards)?

BH: With this album more than anything, it’s not a desire to wow anyone or show off as a singer or as a writer. It’s more so to connect with people on a very personal level. Hopefully it can be a healing album. I never assume anything I do is going to blow up and be a big record. It’s always a hope, but let’s face it, I’ve had a long career and haven’t had any of that. So it’s not like my mind goes to that.

TCDP: It’s been a while since we’ve seen you in the Twin Cities. Can we expect you to make it back in the not too distant future?

BH: Most definitely! We are going to be in the States a lot. Up until now we’ve been doing about 90% in Europe, Australia, Canada and Eastern Europe and only 10% here. Now, we’re going to be doing 60% here and 40% there, which I think is an important shift since this is where I’m from. There something to be said for when you’re working and you’re really trying to connect with where you’re from. This is a great country and I haven’t really spent any time here and I think that would be a wonderful gift for me and my bandmates.

In conclusion: Thank you to Beth for taking time out to do this interview with me. I’m happy to report she came out and put on a show that was off the charts and will be on my list of favorites in 2015. I was also impressed that she still made a point to come out after the show to meet fans and sign autographs—what an absolute pro!!

Read the review and see more photos from Beth Hart’s concert on February 19.