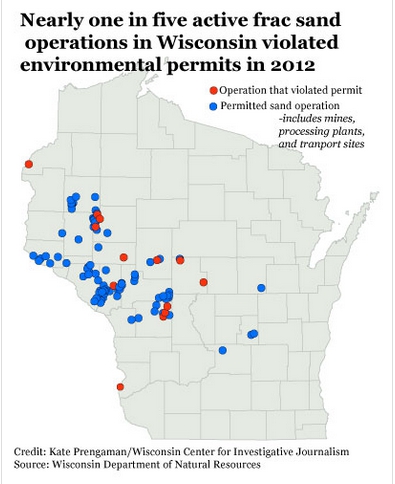 Since it’s an article by Wisconsin Center for Investigative Journalism intern Kate Prengaman, one should approach with caution, but an article in today’s LaCrosse underscores the need for more than just a list of “best practices” and that promises from the industrial sand mining industry aren’t a substitute for strong state oversight.

And it’s curious to note that while the article notes that nearly one-fifth of the active industrial sand operations violated their permits, readers never see a total dollar figure for the fines levied.

Nearly a fifth of Wisconsin’s 70 active frac sand mines and processing plants were cited for environmental violations last year, as the industry continued to expand at a rapid clip.

Violations included air pollution, starting construction without permits and an accident at the Preferred Sands mine in Trempealeau County, where a mudslide during a heavy rainstorm damaged a neighboring property.

In addition, the state Department of Natural Resources cranked out letters of noncompliance — warnings to fix a problem before it becomes serious enough to merit a notice of violation — at numerous facilities. . . .

“Some of these companies should have known better,” said Marty Sellers, a DNR air management engineer.

“They seem to put construction and production ahead of regulations.”

Oh, jeepers. What a surprise. Sadly, Prengaman doesn’t think to file a data request for the number and location of frac sand mining and processing facilities that received letters of noncompliance, but goes for a hickey beside the jugular with the anecdotal:

Usually, Sellers said, the DNR expects 90 percent of companies in a regulated industry to comply with rules on their own. But in his visits to a dozen frac sand facilities, Sellers encountered the opposite pattern, and he sent letters of noncompliance to 80 to 90 percent of the sites.

That would be 10 or 11 of the industrial sand sites he visited, compared to the whole of a regulated industry, but as a suggestive but meaningless statistic, 90 percent sure is scary. As well as a distracting cover for the intern’s failure to score public records.

The claim is sensational–but it’s a minor anecdote. Producing those letters of noncompliance might actually give readers a concrete, documented sense of what the problems actually are–and how frequently they come up under WI DNR oversight.

She didn’t do good enough exploration of the public record to prove that WI DNR actually cares about how badly behaved this industry might be–or what that behavior might be–while just a little digging suggests that the agency is most interested in “partnering” with those it’s charged with overseeing.

And buried in the story, after the tale of two Wisconsin Department of Justice (DOJ) investigations and three fines, this:

Nine companies that received violations faced no fines, Dix said. Their violations were largely either paperwork problems or other easily corrected issues.

What’s Wisconsin’s response to the violations? That’s a good question. First, let’s look at Prengaman’s text, which on the surface paints Governor Scott Walker as a real man of action:

Gov. Scott Walker has proposed two new DNR positions in his budget to monitor the sand industry, by shifting $223,000 from other parts of the budget.

The Wisconsin Industrial Sand Association, an industry trade group representing five large companies, applauded the move. Increasing staff will help to ensure that all mining companies operate according to state laws, the group said in a press release.

Prengaman both buries and obscures the news that the two new Wisconsin DNR staff positions in Walker’s budget–the ones the Wisconsin Industrial Sand Association so eagerly welcomes–will be assigned to the Air Program.

Do you think? On October 2, 2012, the Wisconsin DNR released a weekly column, DNR seeks additional staff to broaden management of industrial sand sites, that was quite specific about where the staff would work:

In an effort to expand the state’s management of natural resources in and around industrial sand sites in Wisconsin, the Department of Natural Resources has asked for two additional Air Program staff in its biennial budget request to the Department of Administration.

While the link to the press release is provided on the Wisconsin Watch site, it’s on the LaCrosse Tribune article–certainly not in print, and not online. Prengaman’s text itself–what most readers will see–simply doesn’t adhere to fact.

. . . Stepp noted that the two new staff will work in the Air Program on compliance and permitting issues at sites around the state, including industrial sand sites. . . .

. . .“With this high demand we’ve seen a significant increase in our air and water permitting programs, as well as an increase in requests for endangered and threatened species and archeological reviews,” said Tom Woletz, special projects coordinator in the DNR’s Water Division and the agency’s frac sand expert.

Read that closely. These new hires are designed to help clear high demand for the industry, far more than they are to protect citizens. It’s the sort of mindset that views regulation as hoops to jump through, and the environmental consequences as mere “growing pains.”

No wonder the Wisconsin Industrial Sand Association was so delighted with the request to shift funds:

Sand mines must also follow the same state requirements as other nonmetallic mining operations in Wisconsin, said Woletz, including getting necessary air and water permits and following state reclamation laws.

“We’re also working with the newly formed Wisconsin Industrial Sand Association (WISA),” said Woletz. “By engaging this organization, along with other groups and the general public, we hope to keep an open dialogue that helps us provide the best management possible for the protection of our state’s public health and the environment.”

In an effort to expand the state’s management of natural resources in and around industrial sand sites in Wisconsin, Governor Scott Walker requested two additional staff in the Air Program to work on compliance and monitoring activities as part of his 2013-2015 State Biennial Budget proposal to the Legislature.

While sand and gravel mining has existed in Wisconsin for decades, a recent growth in the industry is occurring nationally, attributed largely to hydrofracking, a technique used by the petroleum industry to extract natural gas and crude oil from rock formations.

Within the past few years, more than 70 sand mining and processing operations either have been constructed or are under construction in the state. The department estimates 40 additional “frac” sand mining or processing sources could become operational over the next few years.

“This rapid increase and expansion of sand mining and processing operations in Wisconsin has created a significant, new workload, in a compressed amount of time,” said DNR Secretary Cathy Stepp. “We are committed to dedicating staff time and resources to protect Wisconsin’s public health and the environment.”

Staff in these positions will:

* conduct compliance activities for new and existing sand mines and to provide support to monitoring activities;

* respond to complaints by following through with investigation and compliance auditing, which may include partial compliance inspection;

* ensure proper enforcement procedures are implemented in cases where non-compliance is found, including referral to the DOJ when necessary; and

The closer one looks at this new staffing, the less there is to meet the eye. It’s compliance and monitoring (DNR budget priority #24) for additional mines that will be coming online, not additional enforcement.

And adding up the handful of fines levied–remember, bureaucracies divide compliance from enforcement–we discover another fact omitted from Prengaman’s reporting. For all the millions the industrial sand companies are pulling from the ground, the total fines charged for polluting the water are and the air?

$4127.00, although additional fines might come from the two incidents under investigation. Two of the three fines come from water permit violations–but no additional state resources are going into this area.

We’re betting that the industry will point to that figure with pride–while laughing all the way to the bank.