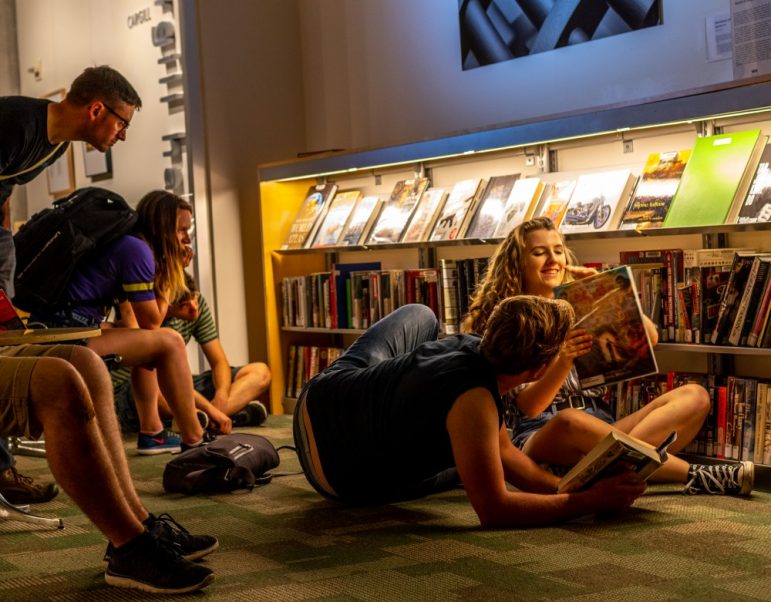 A new exhibit at the Weisman art museum, “The Section of Disapproved Books,” allows guests to look at and flip through over 400 books banned by prisons across the country. The library contains several popular covers, highlighting the subjective nature of prison book banning and encouraging visitors to think critically about the use of censorship in the prison system.

“The goal would be to affect these regulations,” said creator Daniel McCarthy Clifford. “[Banning these books] is a pretty arbitrary process, and I think bringing awareness to it could affect some policy change.”

Find out more at MN Daily.

In the Franklin/Hiawatha corridor, many homeless Native individuals have formed a small community encampment, sleeping in tents and helping each other to survive the harshness of homeless living conditions, as well as receiving regular assistance from volunteers. The encampment is comprised of over 90 tents, and by Sept. 30, the City of Minneapolis intends to disband and remove the encampment, causing more uncertainty for those living there.

“We gotta stay where we gotta stay. We’ve slept outside in the cold, in basements, behind dumpsters, in a closet inside a warehouse,” said Angela Senogles-Bowen (Leech Lake Ojibwe).

“Give us a vacant school. Allow us to turn it into a Native-American-run shelter. The only way [to help] is to bring our culture back: drum class, ability to smudge throughout the day, the pipe, the language,” said Greg Franson (Lac LaCroix, Canada), a volunteer with Natives Against Heroin.

Read more at The Circle News, and find out information on getting involved at Franklin Hiawatha Camp.

On Sept. 8, the Minnesota African American Heritage Museum opened at 1256 Penn Ave. N., Minneapolis. The museum features historical and creative exhibits depicting African American experience in the state, including exhibits on influential women, black participation in WWI, the history of the Great Migration and more.