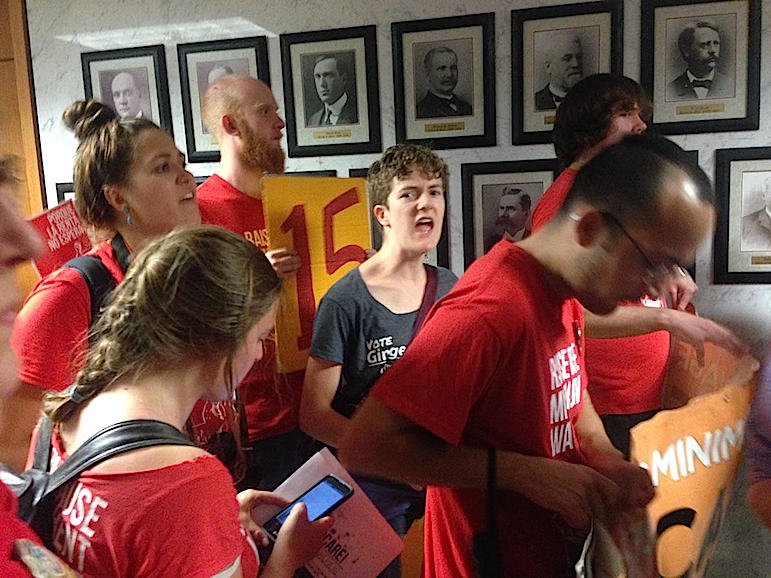 Organizers and Activists showed up at a June 22 Minneapolis City Council meeting to advocate for a $15 minimum wage. Photo courtesy of Workday Minnesota.

After four years of grassroots organizing, a $15 minimum wage may soon become a reality in Minneapolis. Workday Minnesota brings us the story on the Minneapolis City Council’s status and the long road it took to get this far.

“I feel like we have a really strong groundswell of support for raising the wage,” said Elizabeth Glidden, Ward 8 City Council Member and the measure’s chief author.

As of Wednesday morning the current proposal would phase in a $15 wage in five years for all companies over 100 employees. Businesses with fewer than 100 employees will have seven years to reach the $15 minimum.

The final vote on the measure will take place Friday, June 30 at 9 a.m.

Kristoffer Tigue from MinnPost reported on a new $300,000 grant program from the Minnesota Pollution Control Agency designed to clean up heavily polluted properties or “brownfields” in the Twin Cities, especially in “historically underserved” neighborhoods, to pave the way for redevelopment. The agency identified about 100 sites in North Minneapolis and St. Paul that could benefit from the program.

“We’re trying to look at all our program areas and trying to make sure, when we can, to prioritize lower income communities and areas where there’s more people of color,”said MPCA Environmental Justice Coordinator Ned Brooks. “This is a great example of that.”

Session Daily reports that a Ramsey County judge issued a temporary injunctive relief order directing Minnesota Management and Budget, which cuts the checks for the state, to continue funding the Legislature at 2017 base levels for 90 days or at the suit’s conclusion before then.

The order comes in the midst of a lawsuit between Gov. Mark Dayton and the state House and Senate after Dayton made a line-item veto removing funding for the two legislative bodies. Dayton cut the funding in an attempt to force lawmakers into a special session.

The state Legislature will not be funded for 90 days, or until the lawsuit ends. Read all the details on the lawsuit at Session Daily.