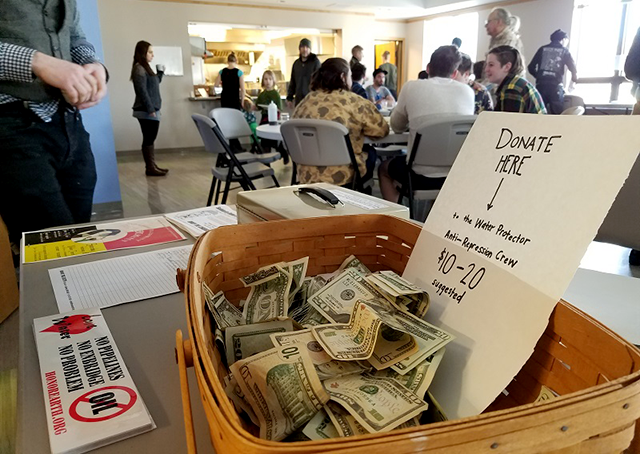 A Minneapolis fundraiser, hosted by Honor the Earth on Feb. 18, collected donations to help the nearly 800 people facing charges for their participation in the Standing Rock demonstrations.

The Standing Rock protests that lasted months may now be over, but the effects of the movement have only just begun.  Twin Cities activists are gearing up and preparing to continue the fight against similar projects that might affect community members and their environment.

“The movement won’t end at Standing Rock, even if the pipeline gets completed, which looks likely to happen soon. Instead, the North Dakota protests invigorated a sprawling network of activists committed to fighting oil and natural gas pipelines across the country.”

Read the full article by Kristoffer Tigue that talks about local pipeline fights, plans to prepare to fight back, as well as divestment campaigns at MinnPost.

Education Minnesota, the leading advocate for public education in the state, announced a new partnership with McFarlane Media and Minnesota Multicultural Media Consortium to create a marketing and public awareness campaign connecting Minnesota communities of color and American Indian communities to the mission of Education Minnesota.

“Two of the greatest challenges facing public education in Minnesota are raising the achievement of students of color and persuading more promising young people of color to consider teaching as a career.  Our goals with this partnership are to create deeper conversations with communities of color about how to help all students succeed and to, frankly, recruit and retain more teachers who look like and share cultural ties to the students in Minnesota’s increasingly diverse classrooms.”

Read more about the partnership here at Insight News.

The Walker Art Center will screen a film series in March aimed at showcasing the American Indian experience. The series — entitled “INDIgenesis: Indigenous Filmmakers, Past and Present” — is directed by American Indian themselves, allowing the series to examine the community’s representation in filmmaking. The focus of the film is to highlight Native American directors

“Large institutions have shown films that are directed by non-Natives, so I think there’s some misinformation and miseducation that’s continually portrayed — we’re all heroin addicts, or we’re all alcoholics, or we’re in this desolate place, which is not true.”

Find out more about this unique series at the Minnesota Daily.