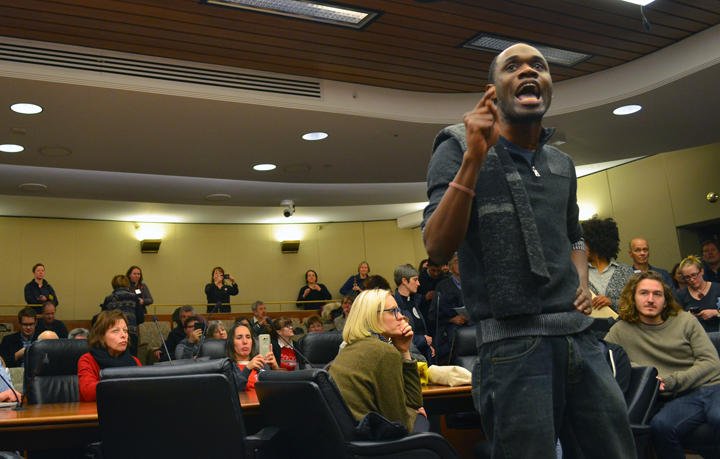 Mike Griffin speaks at the state capitol during a meeting of the Minnesota House's jobs committee. Photo courtesy of Workday Minnesota.

Workday Minnesota has published two great reports on the continuing fight at the Minnesota Legislature against bills that would block cities from passing ordinances that advance workers’ rights. The bills, which have cleared committees in the GOP-held state House and Senate, would not only prevent any attempt to raise the minimum in Minneapolis, but would also revoke Minneapolis and St. Paul’s sick and safe time ordinances.

Workday Minnesota alleges that the bills at the state capitol were written and sponsored by the “American Legislative Exchange Council (ALEC), a corporate-funded entity that produces “model bills” (link is external) introduced at the local, state and national level. ALEC-written bills privatize public schools, weaken environmental and consumer protections and institute Right to Work laws to restrict unions.”

Kristoffer Tigue for MinnPost’s Community Sketchbook provided an in-depth report of a Feb. 4 community forum that brought community members and government officials together to discuss problems, changes and potential solutions to issues within the juvenile justice system.

Tonja Honsey ran away from her Albert Lea home at the age of 12 to escape an abusive relationship and was eventually put into foster care. But because she kept running away, she said, the state locked her up in a number of juvenile detention centers and group homes for nearly four years. “I hadn’t been charged with any crime other than running away from home,” she said, “and no one ever asked, ‘Why are you running away from home?’ ”

Now 35, Honsey said it took her decades to realize exactly what happened to her. And she said cases like hers show that Minnesota isn’t doing enough to address the root problems youth may be facing when they enter the criminal justice system.

“Sex trafficking, drugs — they’re doing these things out of survival, not out of a choice,” she said at Saturday’s forum. “We need to give them housing … we need to be able to build them up and teach them their worth.”

Catch the full story over at MinnPost.