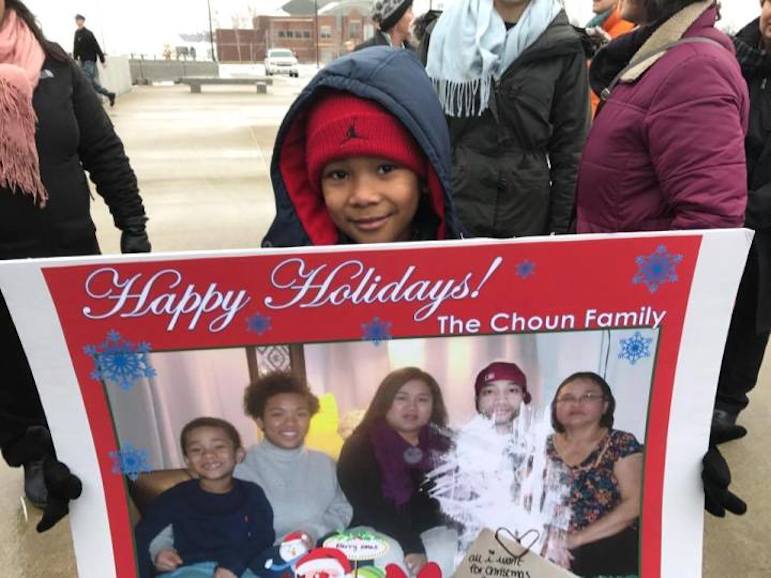 Family members of Phoeuy Chuon one of the eight Cambodian men detained by Immigration and Customs Enforcement hold a holiday card to highlight their missing family member. Photo courtesy of Asian American Press.

Asian American Press highlighted a protest on Wednesday, led by the families of the “Minnesota Eight.” Eight Cambodian men, all of whom immigrated as refugees and spent most of their lives in the U.S., have been detained by Immigration and Customs Enforcement (ICE) since August and are at risk for deportation.

One of the detainees, Sameth Nhean, recently spent his 35th birthday in detention. Nhean was born in a Thai refugee camp and has never been to Cambodia. His wife, Sokha Kul, attended the rally with their 3 children.

“I don’t understand why they can’t just let him go. His crime was in 2002 and he served three months for it,” Kul said. “He’s now been in ICE longer than what he served for the crime that they’re trying to deport him for in the first place. Cambodia said they don’t want to take them. Why keep him in jail?”

The families of the MN 8 fear that their loved ones face indefinite detention and are increasing anxious about the new administration that will take office on Jan. 20.

Read more about the protest, which drew a gathering of more than 75 people, over at Asian American Press.

Workday Minnesota reported on the big win for workers in a growing new industry for the state. On Thursday, Jan. 12, workers with Minnesota Medical Solutions LLC signed a three-year agreement with the company.

Highlights from the agreement include annual wage increases for all employees, progression increases and an expansion of the current wage scale to provide greater opportunities for workers to enter the industry, among other benefits.

Learn more about the agreement and the industry at Workday Minnesota.

According to Session Daily, The Minnesota Department of Corrections reported that the state detained fewer prisoners in 2016 than in 2015, marking the beginning of a slow-down for the state’s overall prison population for years to come.

At this time last year, department officials expected the state’s prison population to continue on a steady climb to 11,292 by 2024. However, a new drug sentencing reform law aims to ensure drug dealers will spend significant time in prison, while addicts who may be more amenable to treatment or probation do not serve time. The change is expected to knock 875 inmates off that year 2024 total.

Find out how Minnesota compares to other states and how the state’s facilities will be funded over at Session Daily.