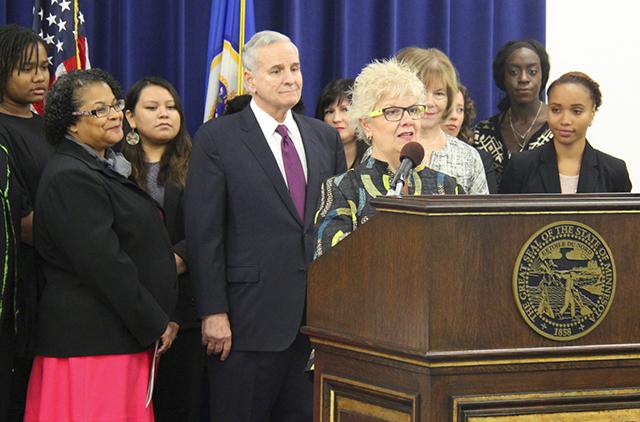 Foundation president and CEO Lee Roper-Batker pronouncing the Young Women’s Initiative of Minnesota. Photo Courtesy of Office of the Governor.

The Young Women’s Initiative of Minnesota, an initiative to close racial and gender gaps, was unveiled by Gov. Mark Dayton and Lt. Gov. Tina Smith, according to a report from Kristoffer Tigue on MinnPost’s Community Sketchbook. It focuses on improving quality of living for women of color, women in Greater Minnesota, women identifying as LGBTQ and women with disabilities, all between the ages of 12 to 24. Furthermore, it will be the nation’s first private-public union in fighting racial-gender disparities.

Lee Roper-Batker, president and CEO of the Women’s Foundation of Minnesota, said, “The future economic health and prosperity of our state is linked to the future success of our young women. Once again, Minnesota will lead.”

Read more about the initiative over at MinnPost. 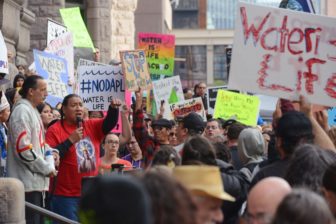 Kevin Beckman and Melissa Steinken of Minnesota Daily report that more than 200 demonstrators met outside the Hennepin County Courthouse, supporting the protestors of the Dakota Access Pipeline. Amongst the demostrators were members of Black Lives Matter.

University of Minnesota graduate student Natalia Vargaw Marquez said, “There’s so much about racism, colonization and environmental issues mixed in this situation that you just have to be here.”

Read more on the issue over at Minnesota Daily.

“What brought them to the table,” Frias said, “was working together to ensure that the community’s voice was part of how the system was working and [that Minneapolis government systems] would be responsive to any issue should it happen in the future. Their ultimate goal is to work together, no matter how long it takes, to create a criminal justice system in which everyone in our community is treated fairly.”

Read the whole profile over at Minnesota Women’s Press.