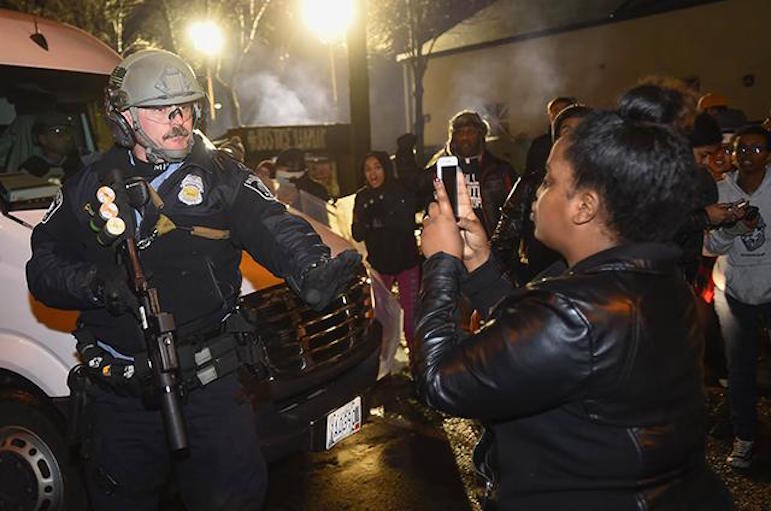 A Minneapolis police officer telling a women to back up as she photographs him in front of the 4th District precinct during a protest on Nov. 18, 2015. REUTERS/Craig Lassig.

Minneapolis City Council has ruled that police who obstruct community members’ constitutional right to film officers on the job will face discipline. The policy will take effect at the end of May when officers begin to be equipped with body cameras. Peter Callaghan of MinnPost reported:

While most of the video footage of controversial deaths at the hands of police officers has been from government videos — often body or dash cameras — or from private surveillance cameras, some of the recordings have been taken by bystanders.

Find out more about the law, and similar ones around the country, here.

U sues over Minnesotan detentions

The Minnesota Daily reports the University of Minnesota Law School, the ACLU of Minnesota and other groups filed suit last week claiming six immigrants are being illegally detained across the state.

The suit says the ICE St. Paul field office is illegally holding immigrants who were granted relief from deportation under the United Nation’s Convention Against Torture.

This week on the Minnesota-Spokesman Recorder, Kenneth Brown shared his thoughts about his first Democratic precinct caucus.

On its face the caucus process is inherently discriminatory. I did not see equity or inclusiveness in any way, shape or form… In my precinct caucus, 550 people entered the room to cast their vote. I could count on one hand the number of clear minorities by color in the room. During the resolutions process, the number of minorities was even less, and needless to say, “persons with disabilities” were noticeably absent excluding myself.