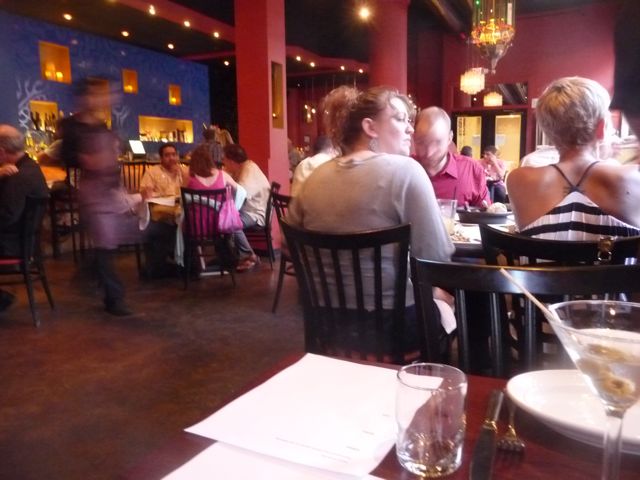 My most memorable meals of 2011 were mostly at old favorites – like Saffron, 123 N. 3rd St., in the Minneapolis warehouse district. The cuisine is as good as ever, but their big news this year is that they stripped off the tablecloths and have repositioned the restaurant as a more casual not-just-for-special-occasions place. We did go there for a special occasion, Carol’s birthday in September, and had a terrific dinner — even without the tablecloths. Highlights included slow-cooked green beans with tomato ($6), a salad of watermelon and heirloom tomato with cow’s milk feta, charred jalapeño and basil ($8), and a nightly tagine ($19/$27) that combined Lake Winnipeg whitefish and Manila clams in a savory stew of green olives, potatoes and tomato. 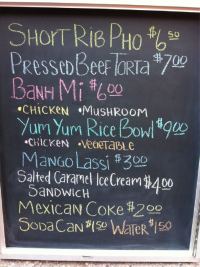 The guys at Saffron, chef Sameh Wadi and his brother Saed, are also responsible for the most memorable street food dish I had this year – the yum yum bowl (which is actually a box, $9)  of steamed rice topped with chicken (vegetarian version also available), Chinese broccoli, poached egg, shiitake mushrooms, roasted peanuts, green onions, basil, cilantro, sesame seeds and a spicy aioli, served from their World Street Kitchen food truck just off of the Nicollet Mall (closed for the season).

I also had a great dinner recently at another old favorite, Ngon, the Vietnamese bistro at 799 University Ave., St. Paul, which features local / sustainable ingredients, Minnesota beers and organic wines. 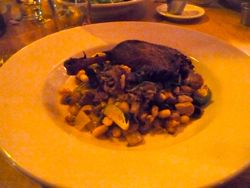 I usually just order off the cheaper “traditional” side of the menu – they make a terrific pho with grass-fed beef – but this time I splurged, and went for the cassoulet de l’Indochine, prepared with confit of duck, pork belly and Northern beans.  Better than most traditional French renditions I have had. Carol’s wild rice-crusted ocean trout, served acorn squash cake, grilled zucchini, oyster mushrooms with green tomato curry sauce was a more delicate but equally flavorful dish. Also had another great dinner at Travail Kitchen and Amusements in Robbinsdale, although another critic in attendance felt otherwise. For my money, it’s still the most innovative restaurant in the Twin Cities, and a great value as well.

As for the milestones – 2011 brought a lot of new restaurants to the local dining scene. The biggest new opening of the year is undoubtedly the Bachelor Farmer, owned by brothers Eric and Andrew Dayton, which opened this summer in the warehouse district. The Bachelor Farmer bills its cuisine as “fresh and simple food that honors Minnesota’s Nordic heritage” – albeit at prices that might amaze Ole and Lena. I have only had one quick appetizer in the bar, a tasty little snack of scrambled eggs and smoked sturgeon with fingerling potatoes and crushed capers, but a return visit for dinner is definitely on my 2012 Must Eat list. 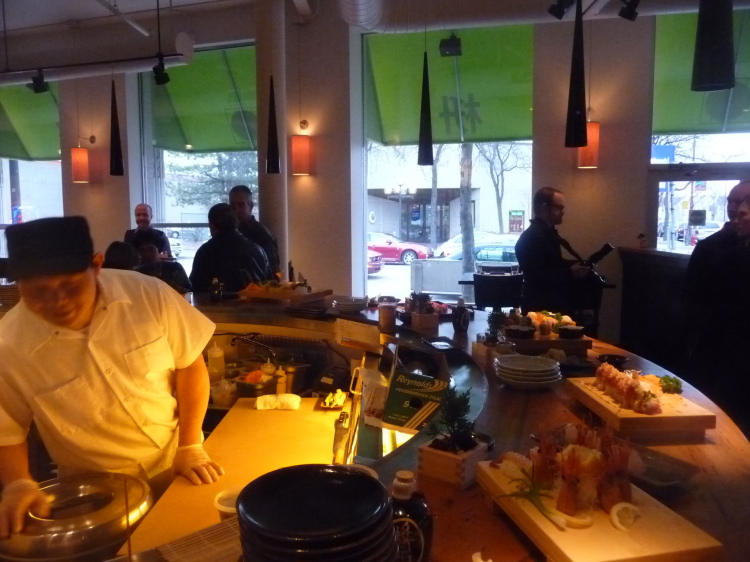 Masu Sushi & Robata, 330 E. Hennepin, Minneapolis, got an extra publicity boost by hiring Tim McKee as a culinary consultant, and uber-hip design firm Shea Inc. to do the design. I went for the grand opening in April and thought nearly everything I sampled was terrific, from the really fresh, sustainably caught sushi to the robata, skewers of grilled meats, veggies and seafoods. Now comes word that Masu Sushi will be opening a new branch next spring at the Mall of America.

Several popular Asian restaurants sprouted new branches in 2011: the best Thai restaurant in the Twin Cities, Bangkok Thai Deli, 315 University Ave., St. Paul, now has a second location, Krungthep Thai, in the old Seafood Palace location at 2523 Nicollet Ave. The menus are the same, but in a nod its Seafood Palace legacy, the Minneapolis location also offers a list of daily seafood specials, ranging from walleye and pompano to live lobster and Dungeness crab.

St. Paul’s Little Szechuan opened a very stylish new location in St. Louis Park’s West End shopping district this summer – my first impression was good but uneven, so I want to return and try some more dishes. Meanwhile, the Grand Szechuan at 106th and France Ave. S.  in Bloomington, which got its start a couple of years ago when chef Luo Guanghe decamped from Little Szechuan and opened his own place, now has its own offshoot, also called Grand Szechuan, in a strip mall at 187 Cheshire Lane N., Plymouth. The new venue is not especially grand, but the cuisine seemed to stack up pretty well.

Zen Box, a fast-food Japanese spot in the Minneapolis Skyway, now has a casual sit-down location as well: Zen Box Izakaya, at the corner of Washington and Portland in downtown Minneapolis. The aesthetics – with the laminated menus, flashy graphics and loud Japanese pop soundtrack, aren’t quite what we have come to expect from a Japanese restaurant, and the ramen I sampled was just okay, but there are some other items on the menu that warrant a return visit: gyu motsu nikomi ($9), described as beef brisket and tripe simmered in red miso ($9), and a yaki natto omelet (“only for the brave, $6”) an omelet filled with famously stinky fermented soy beans.

If there was a hot new trend for 2011, it was definitely the gastro-pub, the neighborhood tavern with a big selection of beers on tap, and a menu that starts with burgers and fries and gets more adventurous. Among my favorites: Republic at Seven Corners on the West Bank, which has dozens of craft beers on tap and some great Happy Hour deals, the Amsterdam Bar and Hall in St. Paul, and the new improved and relocated Muddy Waters Bar & Eatery, 2933 Lyndale Ave. S. Also Pat’s Tap (part of the expanding Bartmann empire) and the Pig and Fiddle, an offspring of the original St. Paul gastropub, the Muddy Pig. 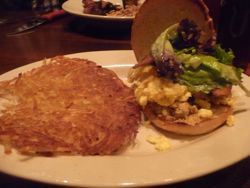 You could debate whether the new Lowry at 2112 Hennepin Ave. S. in Uptown qualifies as a gastropub, (it bills itself as an “urban diner” but it does have a great beer selection and a good selection of burgers. The menu highlights “burgers, whisky, oysters and eggs,” but it also shares some menu offerings such as such as tempura green beans, and fish and chips, with its sister restaurants, the Highland Grill, Uptown Grill and Edina Grill. My first visit, soon after it opened, left me unimpressed, but a return visit a few weeks ago was a different story – attentive service and imaginative food at very reasonable prices. My favorites included the hangtown fry (shown here) – fried oysters, bacon and scrambled eggs, $10), served all day; and the steak and pierogis.

Closings: I was saddened by the departure of Duplex, after six years – wish I had gotten there more often. I think they deserve credit for being the first to introduce Quebec’s gift to world gastronomy, poutine, to the local dining scene  – and now you can find it all over. A fond farewell also to Wolfgang Puck’s 20.21 at the Walker Art Center, and to Il Gatto in Calhoun Square.