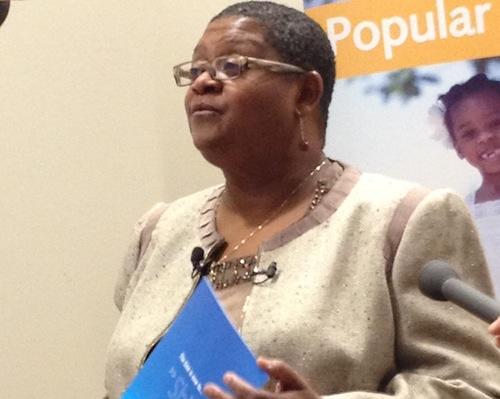 Superintendent Johnson cited family commitments as a key reason for her resignation, saying in a letter given to school board chair Richard Mammen that she felt it was the right time for her to step aside and allow another candidate to help move the district forward.

In an email sent to MPS personnel on Dec. 16, Johnson also mentions a desire to attend to family concerns, saying that her decision to resign should not be taken as a sign that she has lost faith in some of her key initiatives. “Rather, I am acknowledging that the role of superintendent for the next phase of the work requires a level of intensity and focus to which I am unable to fully commit at this time,” Johnson wrote.

However, for North Minneapolis community activist Kerry Jo Felder, who was there when Johnson submitted her resignation, the superintendent’s four year tenure has been less than successful. “I’m glad to see her go,” said Felder. “While she was superintendent, the Minneapolis Public Schools promised change that Johnson couldn’t deliver.”

Felder, who was actively involved in keeping North High School open in 2010, said that under Johnson, the MPS has been a top-heavy district. “We need less administrators and more teachers in the classroom,” she said.

Johnson has been superintendent since 2010, when the school board made a surprise move and announced that Johnson was their only candidate for the job. In a 2010 news report, then-board member Tom Madden said that Johnson was “perfect” for the job, in large part because she was taking over as an MPS insider who would not need to be brought up to speed on the district’s 2007-2012 strategic plan.

Under Johnson’s leadership, MPS has seen an influx of reforms and initiatives, from the 2011 introduction of Teach for America recruits to a current focus on tackling the district’s racial disparities in suspension rates. It may be too soon to tell which changes have been most successful as the district continues to struggle with uneven student achievement rates.

Whoever is chosen to fill Johnson’s shoes will, in fact, be in charge of implementing some of her most ambitious strategies. The district’s new strategic plan, Acceleration 2020, was approved by the school board this fall and contains a new “5-8-10” scorecard for the district. This corresponds to the plan’s goal of accelerating student achievement — as measured by standardized test scores — by 5 percent across the board, and by 8 percent for students of color, every year for the next five years. It also proposes a 10 percent annual increase in the four-year graduation rate for the same five year time frame; currently, it stands at around 50 percent.

Superintendent Johnson will officially step down on Jan. 31, 2015, when current CEO Michael Goar will take over as interim. There is no official word yet as to whether or not a broad search will be conducted for Johnson’s replacement.

Johnson will receive severance pay of around $47,000, which will be spread over six months until the end of June 2015. During this same period of time, she will receive $12,000 per month — for no more than 80 hours per month of work — to serve as a consultant for the Minneapolis Public Schools.