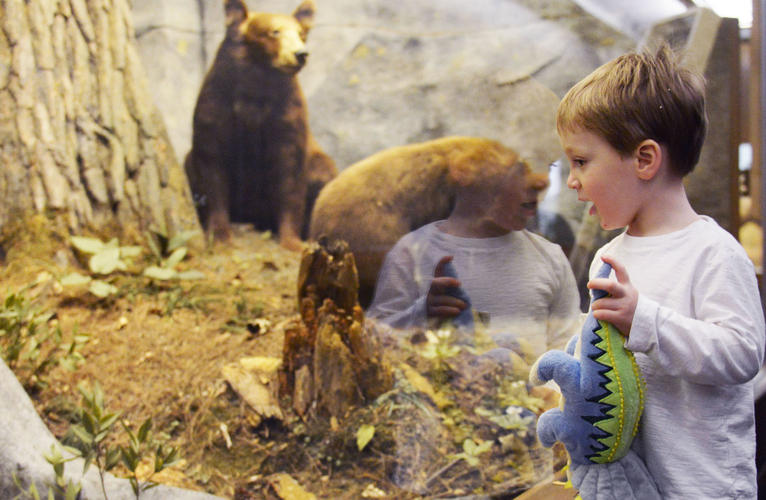 Three-year-old Baxter Fiscus looks at the bear exhibit at the Bell Museum of Natural History as he tours with his mom, Lynne, and brother Braxton on Wednesday, April 17, 2013. (Photo by Amanda Snyder)

But the first-year museum director didn’t go to catch up on work or for a holiday party. A pipe had burst on the third floor, and the museum’s famous dioramas were in danger.

“That night was supposed to be a family gathering,” she said. “And instead I was mopping water.”

The museum floods often because of its antiquated 1930s-era plumbing system, one of several outdated features of the roughly 70-year-old building that puts the museum’s valuable exhibits at risk.

After nearly 20 years of requests, the Bell Museum may finally receive funding to build a new 83,000-square foot facility and a 120-seat planetarium on the University of Minnesota’s St. Paul campus.

Rep. Alice Hausman, DFL-St. Paul, included $47.5 million to be allocated for the project in her $800 million bonding bill. The bill, which allocates state funds to construction projects, has been approved by two House committees and will go before the full Legislature later this month.

The University didn’t request funding for the project in its 2013 Capital Budget request, but the project is listed as “under consideration” in the University’s six-year capital plan of projects it wants to complete before 2018.

Hausman, who has pushed for a new museum for nearly a decade, said she included the money for the museum in her bill because she felt the project was “unfinished business.”

The museum, which contains wildlife art collections, biological specimens and dioramas that depict realistic scenes from Minnesota’s natural environment, hosts about 50,000 people per year. Hausman said she thinks with a new, more accessible facility on the corner of Larpenteur and Cleveland avenues in St. Paul, the visits will quadruple.

The Legislature chartered the museum in 1872 to be a place to “carry on a thorough geological and natural history survey of the state” that would be controlled by the University.

“They were visionaries then,” Hausman said. “Since then, we’ve sort of forgotten about it as our obligation.”

Scott Lanyon, who served as director of the museum from 1995 to 2008, made moving the museum a priority when he started.

“[The current facility] says to anyone who comes into the building that this is about how science used to be; it’s not modern,” he said. “And that’s an unfortunate message for a museum associated with a top research university.”

It took Lanyon 13 years to convince University officials to include Bell funding in its Capital Budget request.

“I denied any possibility that it would take that long,” Lanyon said.

In 2008, then-University President Bob Bruininks included $24 million in funding for the first time in the bonding request. Though the Legislature approved it, then-Gov. Tim Pawlenty eventually line-item vetoed it.

That year, Lanyon resigned. He said the veto did influence his decision, but he also felt it was time for someone new to take control of the project.

When Weller became director, the funding was once again approved by the full Legislature in 2009 only to be vetoed by Pawlenty a second time.

“I was so depressed that day,” Weller said. “The first veto was discouraging, but the second one was just really hard.”

Hausman contacted Pawlenty to question why he vetoed the project. He said he thought the Minnesota Zoo and Science Museum of Minnesota were already doing similar things, she said, noting that his response “stunned” her.

“It struck me as so ill-informed about the project,” she said.

Outdated plumbing, rodent infestations and mold issues plague the museum, which has stood on 17th and University avenues since 1940. Other than an addition in the 1970s, the building has gotten few updates.

The building also lacks central air conditioning, which causes wild temperature and humidity swings that can damage the original panoramic paintings that serve as backdrops for the dioramas.

The lack of a humidity-controlled environment is especially damaging in the summer months. The museum no longer displays art exhibits during the summer, Weller said.

“We cannot ensure that the art will be maintained properly,” she said.

The Bell rents exhibits from other museums around the country. The exhibits are stored in wooden crates in the basement, where flooding occurs whenever there is a heavy or prolonged rainfall.

A single drain in the basement is all that protects the crates from water damage.

“We recognize that we’re pushing the envelope as far as what’s accepted,” said Martin Moen, the museum’s spokesman, who admitted the contributing museums would be “satisfied, but not thrilled” with the Bell’s storage setup.

After years of denied funding, the museum has remained committed to the educational mission that the 1872 Legislature envisioned.

“What we’ve done since is just do our best to spruce up the place and make changes that are within our control,” Weller said.

In 2011 the Bell Museum “spruced up” and merged with the Minnesota Planetarium Society to host the ExploraDome, a traveling planetarium. The planetarium — which fits roughly 15 to 20 people — currently sits in a small room on the first floor of the Bell Museum, apart from the displays. If the $47.5 million is approved, a new 120-seat planetarium will be built and connected to the new museum in St. Paul.

In a lab with bee body parts and honeycombs under tables of microscopes, Moen pointed proudly at a wall display created by a fifth-grade class featuring football-sized honey bees with wings made of cut plastic water bottles.

“The building may be in disrepair,” he said. “But we’re still doing things like this.” 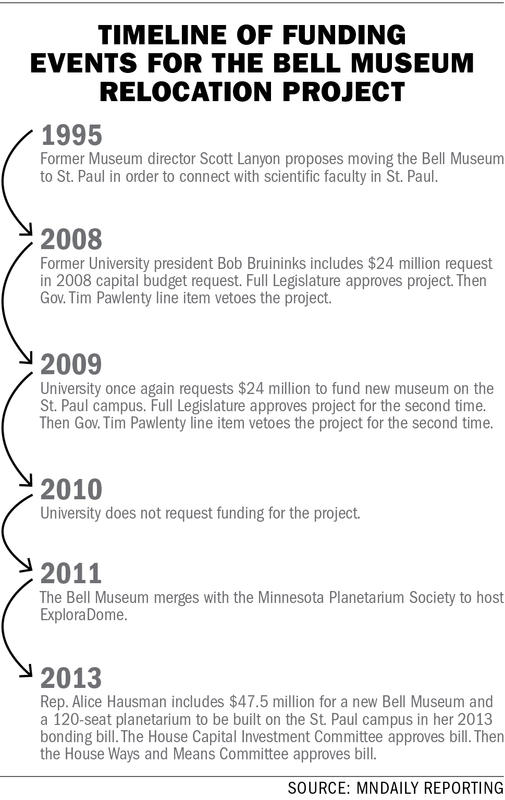