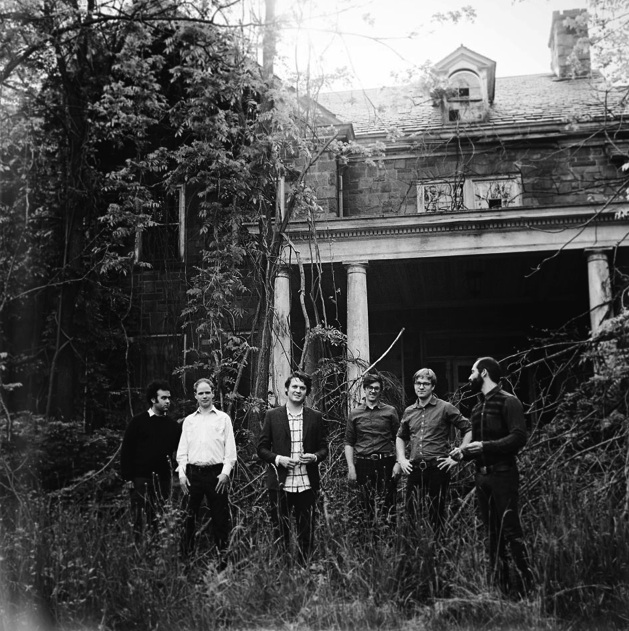 Ah, the sweet scent of sweaty scenesters in the summer. This—which is actually surprising to me—was my third time seeing Beirut in concert. I’m not a huge Beirut fan, but I always end up seeing them when they come to town. Now they’re neck-and-neck with Gardens & Villa for the title of most-frequently-seen-by-Lindsay-LaBarre. A very coveted position indeed. A first for me though was the venue. I’d never had the pleasure of seeing a band at the Cabooze Outdoor Plaza up until now, and I can say that I was overall pleased with the place. It didn’t strike me as specifically better or worse than any other venue that I’ve been to. One note though is that the bars on either side of the crowd don’t offer water cups and necessitate for the purchase of bottled water in order to stay hydrated. That’s all. Bring a water bottle if you see a show there. The crowd was mostly populated by young adults probably from around my age to the late 20s with a peppering of middle-aged people at the back of the crowd and various people from the ages in between. There were also, like, one or two kids there with a mom wearing a maxi dress and a dad wearing a Jason Mraz hat.

A band named Little Scream were the sole openers for this all-ages show. Laurel Sprengelmeyer, a sweet-enough frontwoman with not much of a first impact, is the leading force behind the outfit. Her (and her touring musicians’) stage presence was a lot like their music—typical. There’s only so much to say about bands that just don’t make an impression. Their music was often mellowed out, with interjections of a slow guitar twang which had traces of country in its effects.  Sprengelmeyer’s had the same sort of tones as Karen O’s—vaguely atonal with a vaster feeling to it than the majority of female voices. This quality can shape a wonderful band if it’s pulled off correctly, but Little Scream just weren’t doing it. Sprengelmeyer interjected her songs with ghost-like long tones and ooohs and ahhhhhs. The singing that she was doing seemed like it would be fitting for a band with a creepier-crawlier-dark-and-stormy-night-ier sound and just did not bode well with their music.

Not only did she misuse these long tones, but she also improvised some very loose and almost punk style singing which did also not do their music any good. The band’s recorded work is more dynamic than the live performance, but still nothing to rave about. Most songs were lacking a solid song structure. This being said, I am a fan of chaos in music (weird time signatures, off-beat interjections, etc.) but Little Scream’s music was all too washed out to be able to appreciate whatever oddities were present. It was almost like trying to read light grey font on a white paper; it just wasn’t working out for me. In addition, they were not a very apt choice for an opening act. I know that opener booking doesn’t work on a “Hey this band sounds like this band let’s put them together, whoo!” basis, but the bookers could have done a little better. Beirut are a highly talented indie band with a worldly flair and Little Scream were, well, not. There were only polite amounts of clapping from the audience who seemed just as bored as I was.

Third time’s a charm, right? So far I’ve seen Beirut indoors once (at First Ave) and outdoors twice (Lollapalooza 2011 and this gig). The atmosphere in specific was much better at the First Ave show as compared to this show. The fairy lights and lattices that accompanied the First Avenue show helped to give the illusion of being at some European street festival on a warm summer night. The fairy lights were still present in the Cabooze show, but instead of being strung up, they were instead woven into the lattices behind the band. I also figure that most of the people who really wanted to see Beirut already saw them at the First Ave show, and therefore there was a smaller population of a devoted audience in attendance.

Anyways, the mood wasn’t as good. That’s what I’m saying. BUT. The mood doesn’t make the whole show. Their set time was a bit delayed, but Beirut took the stage around 8:30 p.m. Something that impresses me each and every time I see Beirut is their musicianship. All the members are extremely talented at what they play, be it coronet, tuba, electric cello, or ukulele. The solos that they concoct weave effectively throughout each song’s background, and their live show is very tight. The swaying of the crowd was almost lulling, but I kind of wished that more people were dancing. Like, really dancing. Beirut would be a good band to do some swingin’ to. Their in-between-song-banter didn’t really help bring the mood up, as Zach mumbled a few words of thanks in between songs here and there. Luckily for my own enjoyment, I wasn’t in much of PARTY PARTY mood so this more mellow show was good. I swayed and rocked along with the crowd, and really did enjoy the show.

It was the best show of theirs that I’ve seen, music quality wise. Side note: these two guys in front of me shared a joint. One of them made this face :-O a lot, coughed with every intake, and then left the crowd about 3 minutes after finishing the joint. The second guy stayed on a bit longer but then nearly fainted and he too had to exit the crowd. I don’t know, I just kind of hope for their sake that it wasn’t weed. I’m no one to judge peoples’ tolerance to drugs, but I hope for their street cred that it either was not weed, or just laced with something funky. There’s my little anecdote for you. As a whole, it was a good, chill night, despite the stickiness.

Oh, and Natalya and I kept a tally throughout the night. We counted 63 dumb tattoos (by our standards).