The little boy in the 1974 movie Claudine told James Earl Jones’ character that he wanted to be invisible. When asked why, the frustrated youngest son of Diahann Carroll’s character simply replied that since his older siblings regularly ignore him, he might just as well be invisible. 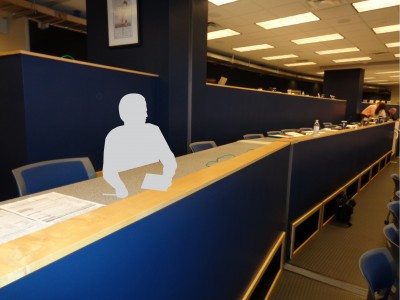 This reporter can easily relate to that boy, because I too am invisible — but not because I want to be.

When I became a reporter in the mid-1970s, I reluctantly accepted the experience of being snubbed as some so-called rite of passage, of paying my media dues. However, five decades-plus later, I am still getting cold shoulders too often from persons who aren’t half my age or experience and who couldn’t spell “journalist” without help from a computerized spell check.

To them, I am invisible.

Perhaps I’m getting older and my patience reservoir is nearly tapped out. I’m also not a duck, and such snub treatments don’t roll off my back that easily anymore. To tell the truth, I have never accepted them easily.

I’m invisible in the working media press box, a place where admittance is allowed only with a season pass or a single-game pass. I duly qualify and have a season pass for nearly every team in town, but often I am treated worse there than the hired help. I often experience my invisibility when groups of reporters hold cocktail-party conversations right where I am trying to work, extending no professional respect or courtesy whatsoever while I’m sitting there.

To them, I am invisible.

If I had a dollar for each time I find my assigned seat occupied by someone other than me, or find myself passed over for post-game interview requests, or find someone standing in my sight line during a contest while they chit-chat with their media buddy or buddies, I could easily rival Bill Gates for top spot on the Forbes rich list.

At the Big Ten baseball tournament at the Twins ballpark last month, I was the only Black reporter in the press box. As such, I experienced four days of pass-overs. This also occurred in March during the NCAA women’s hockey championships — again, the only Black in the house, I got more pass-overs than a rural airport.

Both events were hosted by Minnesota, where some of its athletic communications staff members act as if they might try to walk right through me. I call this willful ignorance, a learned mentality consciously assumed by culturally conditioned persons who have seen me reporting for years. It not only occurs in the mostly White baseball press box, but in the very White hockey press box as well, where people stare at me as though I were wearing striped pajamas at an after-five affair.

This is not to be confused with being the first Black to invade White turf, such as President Obama or Jackie Robinson. Rather, it’s a feeling that comes too often after long treatment as an intruder, an uninvited party crasher.

It is being “the Only One.”

This treatment unfortunately doesn’t always come from Whites. Once or twice I have experienced this at a National Association of Black Journalists convention by supposedly fellow compatriots of color. They’ve looked at my badge, which shows that I represent a Black newspaper and not one of those White-owned mainstream operations, point their noses upward and walk on by.

Unlike fancy credit cards, being the Only One doesn’t lend extra benefits. Instead it has the opposite effect. On those Only One occasions, which sadly are becoming more the rule than the exception, when I confront these media relations people to ask why I didn’t get something that everyone else in media row got, I receive that “You must have done something wrong” or “I didn’t know you were sitting there” look.

Since my late parents and my late uncle, who lived with me almost all my life, taught me always to act as if I do belong even if I don’t, whenever I press the issue, especially if I do so too strongly for tender sensitivities, then I’m unfairly cast as the “angry Black man.” It’s a Marvin Gaye two-fer — it makes me holler and put up both my hands.

I don’t ask for anything special, just equitable treatment. If I am one of 25 media reps in the room, then I should expect and be afforded the same rights and privileges as the other 24. After 40 years-plus as a reporter, I shouldn’t have to or need to blend in to fit in. Blending in just doesn’t come easily to someone of my physical size, skin color and overall temperament.

According to a Three Dog Night song, one is the loneliest number. But being Black and the Only One is umpteen times worse.

Next week: Being the Only One when playing America’s supposedly national pastime