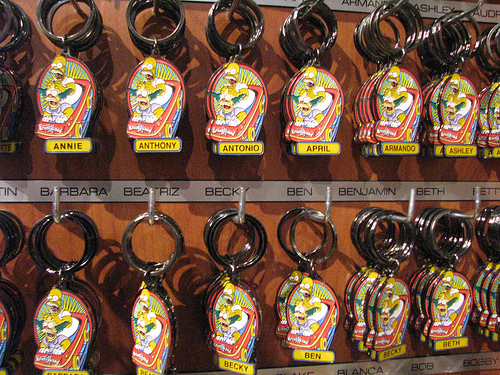 My family went on a lot of road trips when I was a child, and we stopped at a lot of gas stations. I think gas station merchandise was invented to make children like me feel bad about ourselves. Racks and racks of personalized toothbrushes, license plates, snowglobes — and not a Daci in site.

Officially, my name is Esther, but believe me, the Esthers of the world didn’t have any gas station toothbrushes either. I was named after my dad’s mother, Esther. The more famous Esther, of Purim fame, was also called Hadassah. Daci, which rhymes with bossy, is short for Hadassah.

Don’t get me wrong, I like my name, and I’m grateful that my parents gave me an alternative to Esther. The old-fashioned name conjures images of rocking chairs, orthopedic shoes, and denture cream. It had a brief comeback when Madonna went all Kabbalah on us and changed her name to Esther, but that fizzled out. Last year, I heard Wanda Sykes reveal that she named her middle aged spare tire Esther. She even gave it a voice. It was not a proud day for me and Esthers around the world.

There are a few places where I can’t hide behind the pseudonym Daci: at the DMV, the human resources department, the ticket counter at an airline. When I was in school, it was the first day of class. My last name started with S. I didn’t feel the sheer, heart-racing terror until the teacher got to the Ps. There could only be so many P’s, probably no Q’s, maybe an R or two… and then she would get to me. She would say the geriatric name I was bestowed at birth and there would be a few giggles. I would be forced to project my voice; something my husband will tell you today is virtually impossible: “I’m here. I go by Daci.”

The nice teachers wrote it down, invariably spelling it Dawsee and later calling me Darcy. The teachers with no tact squinted at me with accusing eyes. “Call you what? Why?”

And then I’d tell my story. Even the extremely abbreviated version takes up the better part of a minute, and by the end of it the damage is still done: the entire class knows my secret.

This is especially troublesome when you’re the new kid in a tight knit fifth grade class, when kids are realizing how mean they can truly be to each other. When I tried to talk to my new classmates, they would run away screaming my hilariously weird name. Not only did I dare to live with the name Esther, I made it worse by carrying a backpack whose brand was not the ubiquitous Jansport.

I remember the offending backpack clearly: it was navy, with a pink stitched trim. The fact that it wasn’t a Jansport was enough to turn the “cool” kids against me, but the actual brand emblazoned on the back just made it worse: Jollybag, which is apparently slang for condom.

The only two friends I made that year were named Wenjia and Marquesa. We never talked about it, but we obviously bonded over our hard to pronounce names.

My husband, Yoni, has had similar problems. He was born in Israel, where Yonatan is wildly popular. In a sea of Yonatans, his parents never imagined their child would have issues explaining his name. And then they moved to Shreveport, Louisiana, where Yoni became Yanni and no amount of correcting could change that.

When we introduce ourselves together, the person we’re meeting gets a little smile on their face, as if they are remembering their first childhood encounter with a kid who had a weird name. Perhaps they are reminiscing about a sense of accomplishment as they chased this poor kid around the playground. Their smile says, “It makes me so happy that two of these people found each other.”

Yoni and I are no longer mocked or run away from (although I think being run away from is an experience unique to myself, Yoni probably never carried a Jollybag and if he did it was the Urban Dictionary kind), but we still have issues with our names. We’re often forced to give our names at inconvenient moments when I would much rather save a few minutes and some confusion and remain anonymous. Trying to get a table at a restaurant, getting a fitting room at J Crew, or ordering a coffee at Starbucks are all similar.

“How do you spell that?”

“Okay, great, thanks Dawson! Your coffee will be ready at the other end of the counter.”

In five minutes (4 of which were used trying to figure out my name, 1 of which was spent making the coffee) I get a steaming cup of coffee with “Dalsel” scribbled on it. I lose.

Seven years ago, when Yoni and I started performing these normal rituals — getting coffee, going to restaurants — together, we decided enough was enough. We adopted alter-egos.

Yoni chose Steve. I chose Amy, because I had never been anywhere and not met an Amy. Steve and Amy we were, ready to confidently go forth and take on the service industry — and buy matching gas station toothbrushes.