Amid all the excitement of the beginning of the 2011 season, the Twin Cities Daily Planet became a credentialed press organization by Major League Baseball. A reporter and photographer were at the Minnesota Twins home opener to cover the game. Being newbies among the press proved to be difficult. There really was very little information available from the Twins Media Office and they were left on their own to figure out the numerous media rules and restrictions.

In May I had an opportunity to go to a Twins game as a member of the press. After being informed that I could not use any pictures that I took that day in a blog, I wrote an article about the experience. I have to admit that I was not as excited about this as everyone else around me was. I am much more comfortable behind the scenes rather than in the spotlight. But I realized this was an opportunity that I needed to take advantage of.

It turns out that the game was picked for me when the reporter who was going to the game for the Twin Cities Daily Planet had a conflict and asked me to go. She had done all of the work with Major League Baseball to get TCDP credentialed and had also submitted the request to get me on the very short list of approved reporters.

I had already committed to spending the previous night at my daughter’s house with my grandchildren, so I knew I couldn’t get to the ballpark in time for batting practice. Basically we have access to the players on the field during batting practice and can approach them as they are going between the cages and the dugout. We can also be on the field prior to the game but must stay in the area between the two dugouts. We do not have access to the press box or to the clubhouse. In seems that some of this is because we are in our first year of covering the Twins, but it was not really clear. We also do not have a ticket for the game—so no assigned seat.

The night before the game I was talking to my almost-four-year-old granddaughter. She was explaining why she didn’t want to go to the church meeting that Mom and Dad were going to (they were actually attending an overnight retreat sponsored by the church). According to her there would be no toys, no treats, and she would just have to sit quiet. She went on to demonstrate this by sitting up straight and folding her hands in her lap.

That’s kind of how I felt about going to the Twins game as a first-time member of the press—no press box, no clubhouse, no seat for the game. No fun!

But being the trooper that I am, I headed to Target Field about two hours before the game. The Twins take batting practice three hours before the game. As it turned out, it rained that day and batting practice was cancelled. I approached Gate 29, having been told to use the small gate designated for the press and special guests. I gave the attendant my name and she asked for my ID. As she explained, she needed to make sure I was who I said I was since “otherwise everyone would want to be Jean Gabler today.”

With my ego inflated and hopes raised, I took my press pass and headed for the elevator to go down to the lower level where field access and the press offices are. The usher attending the elevator was very helpful and gave me directions. Since I had taken the tour of Target Field last year I had already seen this level and had some idea what I was looking for.

My first stop was the press office, where I was supposed to pick up a media guide. There was one person in the office and he managed to find the right book for me. I did also pick up several information sheets that were obviously available for the press: a current roster for the Twins and the visiting team, a sheet tracking the progress of Jim Thome in his quest for 600 home runs, and four sheets double-sided filled with statistics and player info. I walked by the press cafeteria and saw Jack Morris sitting at a table. I also passed Dan Gladden in the hallway. For me, that was as exciting as seeing any of the current players. As I said, I am a behind-the-scenes person.

When the rain stopped and the crew came on to begin preparing the field, I headed out the tunnel marked as field access. This took me up through the visitor’s dugout and on to the field. I was the only member of the press on the field—I am sure this was not exciting stuff for the veteran reporters. I awkwardly stood around, trying to stay out of the way as much as possible.  I did approach a woman who had a badge indicating that she was credentialed by the Central Division of the American League. I asked her what her job was and she said something about controlling player access and also that she is the person who gives the umpire the go to start the game. Interesting, I thought.

My press pass also gave me access to the Legends Club and the Budweiser Roof Deck. I walked through both but had also seen both of these on the tour. Fortunately it turned out that I had a ticket to this game also so I actually was able to go up to my seat and watch the game, rather than wandering around the concourses of Target Field looking for a place to call my own. When I originally told the media director that I write a blog, she assured me that they would never be able to credential bloggers since there would be too many requests. I think it is short-sighted of them to not realize that anyone writing about the Twins in a non-traditional way is exposing potential new fans to the game of baseball and to the Minnesota Twins.

I know the Twins recognize the importance of the press, but they really only seem to cater to the recognized sports media.  Attending the game as a member of the press reminded me of when I served on the school board for my kids’ school. Going behind the scenes in any organization allows you to see the shortcomings and the problems. 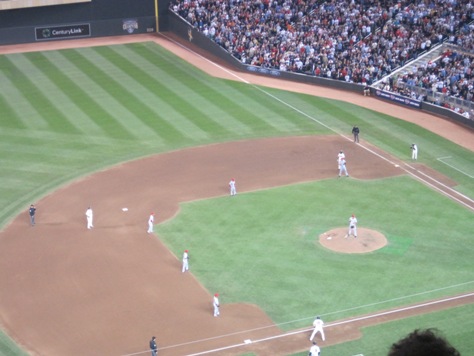 I would rather look at the Twins through my rose-colored glasses from my seat in Section 323 that stand next to the dugout and know that not all is always as it appears. Yes, the grass is greener when you are standing on the field, but you can also see the weeds better.