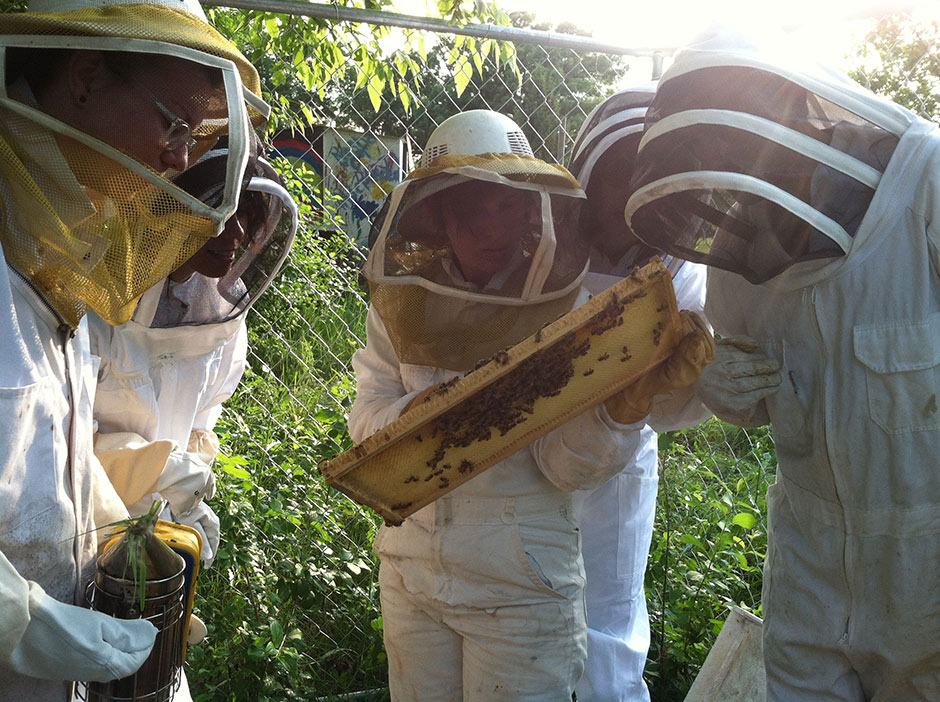 A Community Bees on Bikes class checks out the bees during a class at a Hive Site. (Image courtesy of Beez Kneez)

Kristy Allen and Erin Rupp, the two women behind Beez Kneez are on a mission to bring bees and bee education to Minneapolis in a big way, and their headquarters – the Honey House – will be right in Longfellow.

The Honey House: Bee-coming a Community

In the first year, the primary goal of the Honey House will be to provide local beekeepers the equipment to extract honey, and it wouldn’t be done by hand – it would be done by bike. Allen and Rupp developed what they believe is the first bicycle-powered extractor.

The extractor itself works like a salad spinner. To extract honey, you first remove the wax capping that bees put on the top of the comb to preserve the honey. Then you place the frames that hold the honey and honey comb into the extractor and start spinning it, in this case by pedal power. The honey gets pulled out of the comb through centrifugal force.

“It goes really fast,” said Allen. “The idea with this space is that we’ll have four or five of them [bike-powered extractors] and set up times when people can come and hang out and have spin class. If they don’t want to bike, we’ll bike it for them. It’s not like super cardio.”

While honey extraction will be the primary focus, they also want to develop a community of people interested in bees. “We want to be able to provide a space for urban beekeepers to get information,” said Allen. “Beekeepers love to talk about bees and there’s so much…to learn…beekeepers who have been doing it for 30 years are still surprised at what bees do.”

The Honey House will be a resource for new beekeepers as well. Allen explains that starting out in beekeeping isn’t necessarily easy or inexpensive. “A lot of people give up because their bees die the first year from something that they did or didn’t do – it could be bad luck or the bees got sick. So we want to provide a support place for that community to encourage people to do it and so people do it right….When you bring bees into the community, its not like chickens. You can’t just put them in a fence and more or less not worry about it.” 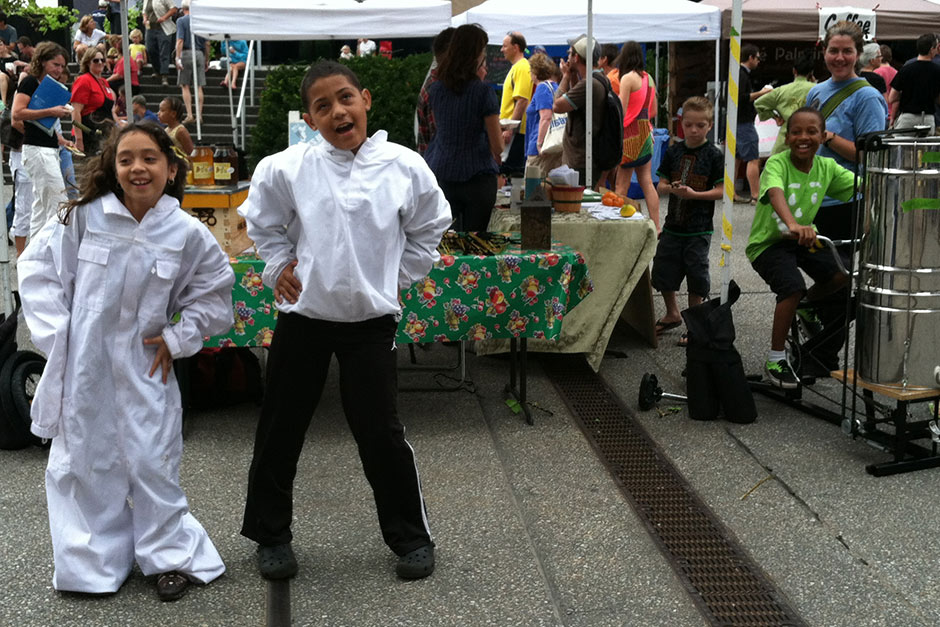 Beez Kneez booth at a farmers market. The bike powered honey extractor is on the right. (Image courtesy of Beez Kneez)

Beez Kneez was originally developed two years ago by Allen as a way for her to sell honey by bicycle to local residents, and at farmers markets, CSAs, and businesses. Soon after, she began working with Rupp to develop Community Bees on Bikes, a grant-funded program designed to educate both kids and adults about bees and beekeeping. “I had this idea to bring hives to the city,” said Rupp. “And I wanted to teach people and she was an educator and also likes riding bicycles. It just came together in this very serendipitous way.” There are several hive sites around Minneapolis that they maintain and use as outdoor classrooms. Longfellow will be getting a hive site, too. It will be installed in the Longfellow Gardens at Minnehaha Falls.

Allen didn’t set out to become an entrepreneur. Beez Kneez was a way for her to combine two of her favorite things – bees and bikes. “I started this [Beez Kneez] with not many plans for it, it was something I believed in but also it was fun. I liked going to people’s houses, and I liked the interactions I had with the community. It felt like I finally was doing something real.”

With the pace of Beez Kneez picking up speed exponentially, Allen and Rupp have a lot going on. “It’s intense,” commented Allen. Between the two of them, they maintain the hives at six sites in Minneapolis and out on a farm, deliver honey, develop and teach classes, and sell the honey at farmer’s markets. They are also busy working with the city in securing the appropriate permits and outfitting the Honey House so it will meet regulations.

Allen couldn’t be more excited about where it’s taken her in just a few years. “Its cool, because I think that people are a lot more creative and inventive than they think,” she said. “There’s a lot of room to be able to do something for yourself. It’s just [a matter of] asking the right people and being humble.” 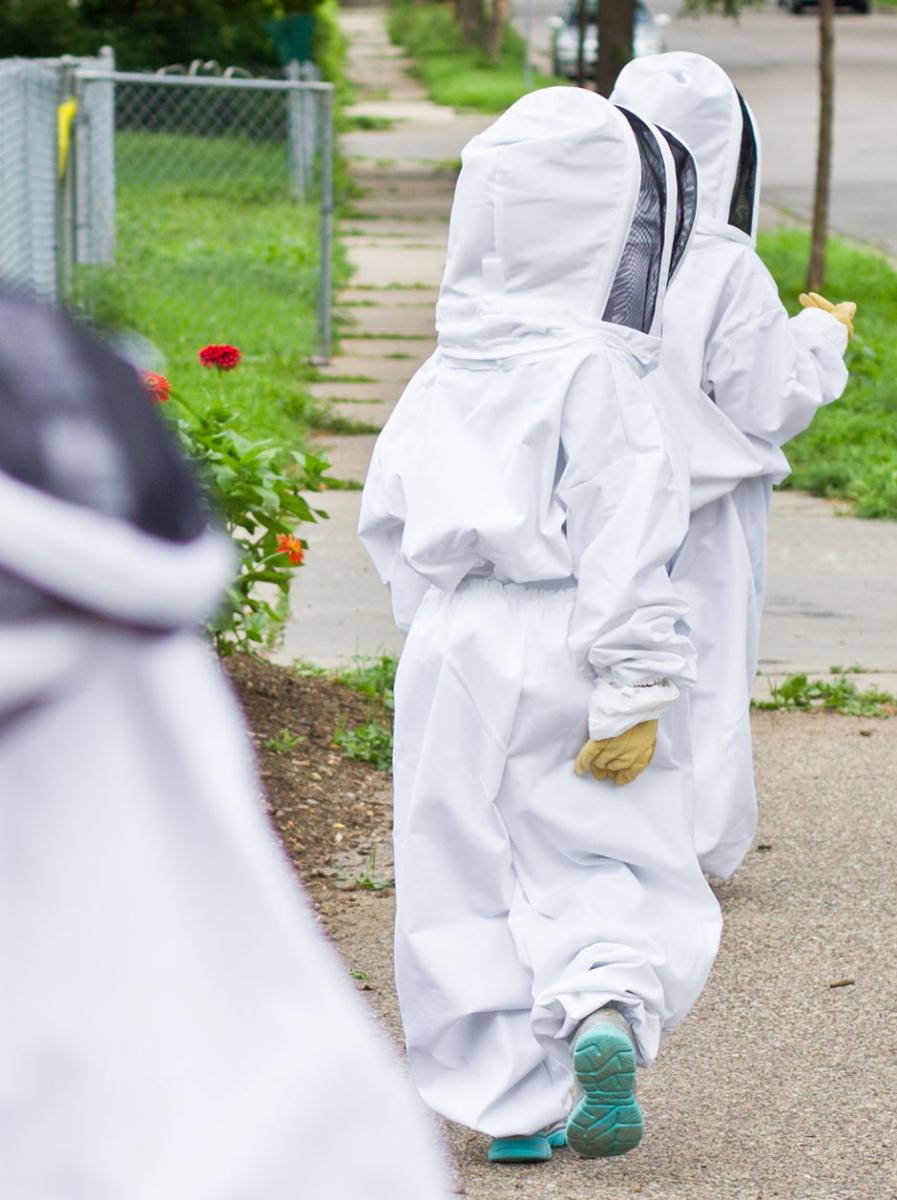 Kids in their bee suits ready to go into the hive. (Image courtesy of Frost of Flower)

Getting Into the Hive

The bee classes get people into a white bee suit and then into the midst of buzzing bees. One-time classes for kids, student groups, adults are available as are season-long classes held through Minneapolis Parks.

The classes designed for student groups aren’t just for science learners – students studying literacy, math, and social studies can learn from the hive. “Bees have this amazing ability, because there’s so much to learn from them,” said Allen. “They’re social insects, so they communicate with each other…. In a beehive there’s no such thing as an individual bee. They all have their individual roles, but they’re all working as one unit. When Marla [Spivak, Director of the U of M’s Bee Lab] explains the biology of a beehive, she says, ‘Don’t think of them as individuals. It’s like a body, and you have all of these different cells working in your body.’ So there’s a lot of different teaching points for bees and connecting them with how we interact with each other and how society as a whole could function together to make a difference. There’s a lot of places you can go.”

Learning about bees – how they make honey, how a hive works, how bees use nectar and pollen – is a part of the class but not all of it. It’s also about overcoming fear and becoming confident. “People are naturally afraid of bees, its not fun to get stung, it doesn’t feel good,” said Allen. “You have to be present when you’re in a beehive. Bees can sense your anxiety, they can sense your fears….[Kids] have to be quiet in the space, and at the end of the summer they’re just super confident. Everyone that puts on a bee suit ends up dancing in it at some point. It’s really cool that we can facilitate something like that.”

Allen and Rupp aren’t out to turn everyone into a beekeeper, but they are on a mission to increase awareness about how critical bees are to our food supply and well-being. They hope that the Honey House will help facilitate this learning. “We’re interested in exposing and raising awareness of bees and getting people more comfortable [around them],” said Allen. “[We’re] trying to communicate that without these creatures, we’re in a whole lot of trouble. So you don’t have to be a beekeeper to support them [the bees], but come experience this pretty wonderful thing that goes on and hang out in a hive with us.”

While bees are facing huge challenges, Allen and Rupp are very aware of how they present the information about bees. “I think that what’s great about the message we send is that we are providing some sort of hope, these are very serious things, but you can have fun,” said Allen. 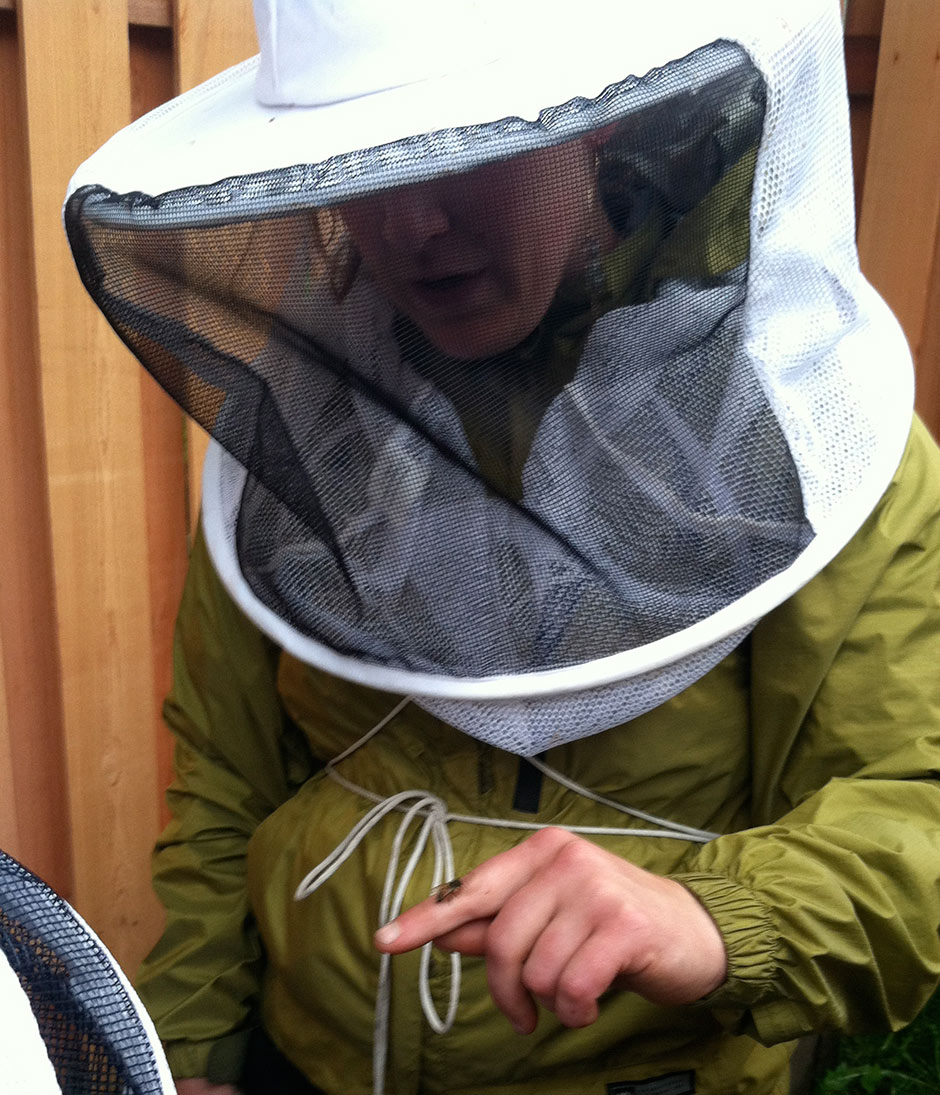 Getting up close and personal with the bees during class. (Image courtesy of the Beez Kneez)

The Honey House will be located in Longfellow, and Allen and Rupp are currently working with the city to secure all of the needed permits. While they will initially be starting out with just extraction, they hope to continue to grow and expand in an effort to help bees and beekeepers. “The building is sort of perfect for what we want to do,” said Rupp. “Its got double doors and there’s a whole city lot where we can grow food. We’re going to bring a bunch of plants and soil in and we’re going to do a lot of pollinator stuff there.”

Bees can make some people nervous, and Allen acknowledges that. “This is going to be a real safe place. We’re very careful about the way that we work with bees and we understand people’s fears of them and we’re more than happy to answer questions.”

She adds, “It’s going to be a very local, community-oriented thing that we’re doing.”

How to Support the Honey House

The Beez Kneez have a Kickstarter campaign to raise funds for the Honey House. They’ve currently raised $22,300. They will only receive the funds if they make it to their $35,000 goal by the end of the month. Donate to the Beez Kneez’ Honey House Kickstarter.