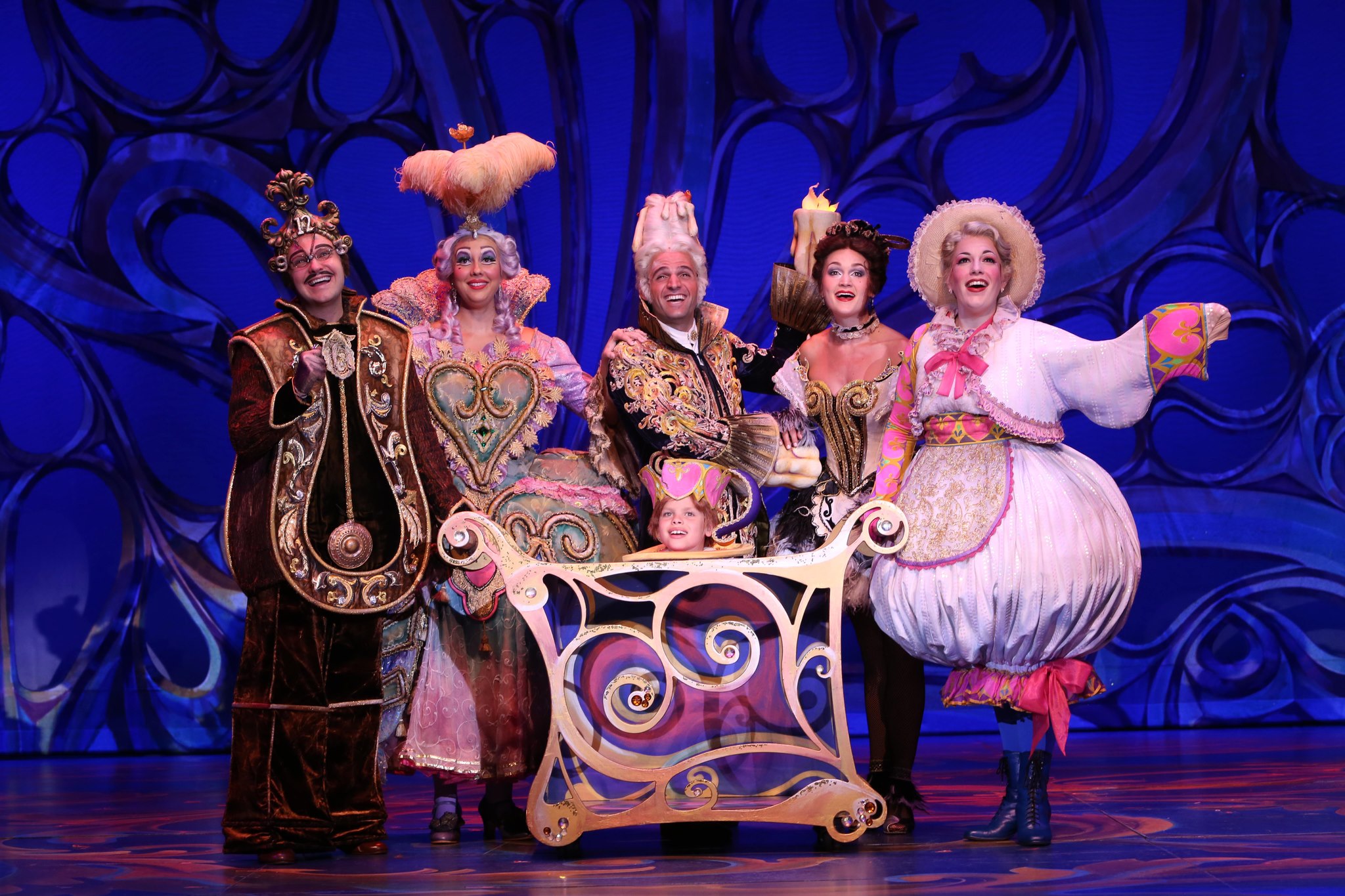 The Orpheum Theatre in Minneapolis kicked off its 2012-13 broadway season by bringing back Beauty and the Beast. Based on the 1991 animated Disney movie of the same name, the musical tells the timeless tale of the charming but rude prince who is turned into a beast after an unfortunate encounter with an enchantress. In order to save himself—and all who live in the castle with him—he must not only fall in love but be loved in return. The servants, who have also been turned into household objects (like Lumiere the candlestick, Cogsworth the clock, and Mrs. Potts the teapot) are determined to help the prince in his quest for love. Belle, the beautiful daughter of the town inventor, agrees to stay with the beast in exchange for the freedom of her father. After much adversity, the two fall in love, releasing the household from the spell. Meanwhile, Belle must also fight off the advances of Gaston, the conceited town hunk, who heads to the castle to kill the beast. In the end all live happily ever, including Disney, who had themselves a new hit.

The fairytale is lovingly wrapped in a whimsical curlicue structure which frames the entire stage. The sets by Stanley Meyer were transformed mainly through the use of fronts for the town stores and Belle’s home, a large imposing door to the castle and clever curving stairs which move around as characters move about the castle. Costume designer Ann Hould-Ward cleverly transformed actors into a clock and candlestick and made a complete table setting of plates and utensils dance their way through the well-known song “Be Our Guest.” Hould-Ward stayed true to the movie in her costuming of Belle and the Beast, which gave the audience a feeling of familiarity that drew us into the story.

Hilary Maiberger played a convincing Belle—a young woman with such a kind heart and love of life that she can indeed see the heart of the Beast. Darick Pead as the Beast does a remarkable job of allowing his human side to shine through while raging and sneering and acting, well, beastly. James May as Cogsworth and Hassan Nazari-Robati as Lumiere play off each other perfectly. The stars of the production, in my opinion, were Jeff Brooks as Gaston and Jimmy Larkin as Lefou, his hapless sidekick. Brooks and Larkin provided numerous comic moments—every time I focused on someone else on stage I would hear the audience laughter telling me that I had again missed the joke.

It was interesting for me to contrast my reaction to Billy Elliot last week which I described as hard work to the sheer entertainment of watching Beauty and the Beast. From the moment the curtain opened to the last scene I relaxed and became part of the story. I do feel that the show is a little longer than it needs to be. Several original songs were added for the stage production which runs for two and one-half hours. There were a lot of young children on opening night and many, like the young girl sitting by me, were struggling to stay awake until the end. I don’t think any of the audience would complain if this show was shortened some.

That being said, I would highly recommend this to anyone who has been enchanted by a fairy tale at some time in their lives. Beauty and the Beast will deliver.

Read Jean Gabler’s review of Beauty and the Beast from the Ordway’s 2009 production.