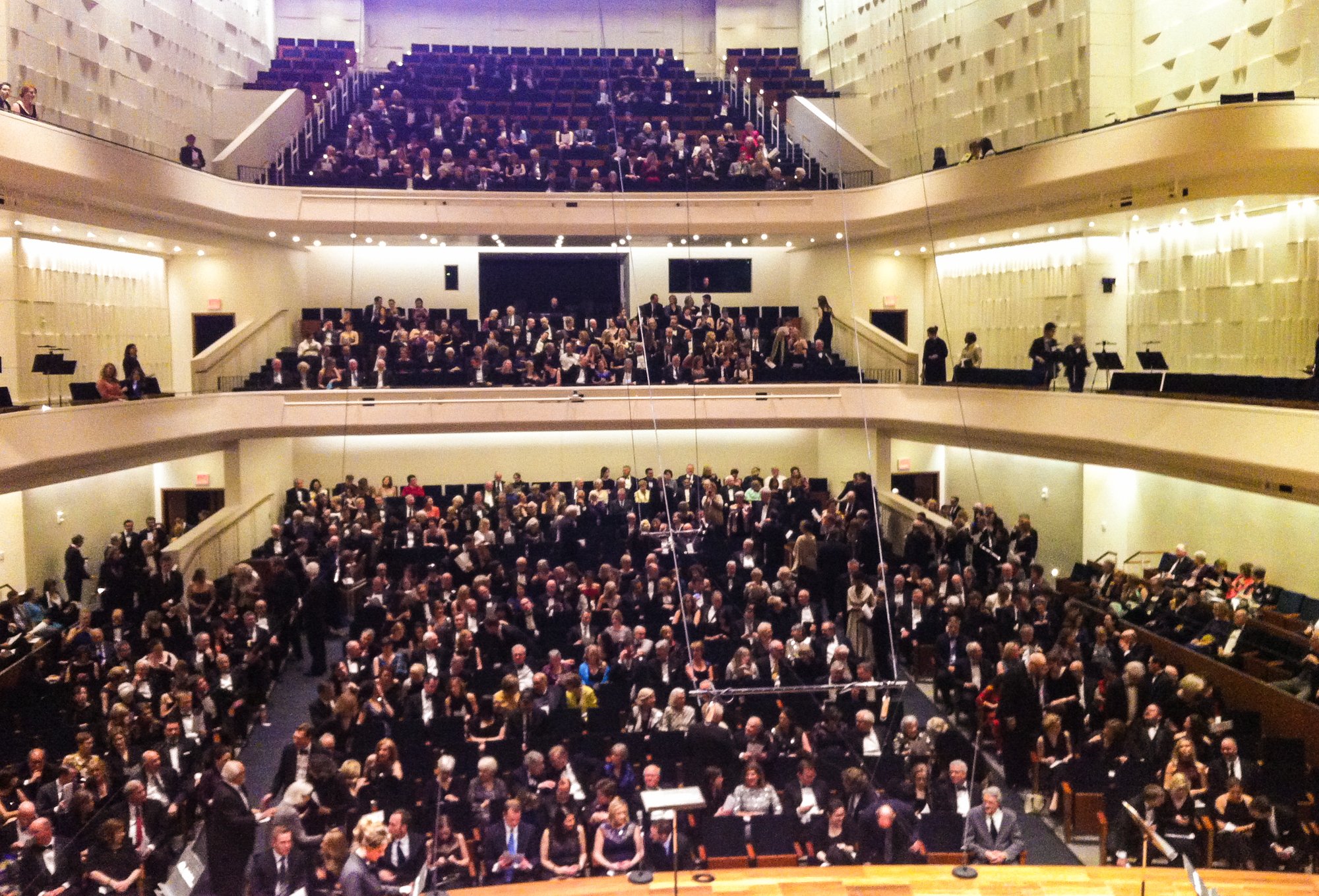 The Ordway Center for the Performing Arts formally inaugurated its new concert hall on Saturday with an elaborate gala celebration. The evening began with a cocktail hour and a formal dinner in the Music Theater, followed by a sumptuous concert in the new space and an afterparty that continued into the wee hours.

The star of the evening was the new performing art space, the succinctly named Concert Hall. (John and Ruth Huss, whose $10 million gift underwrote a quarter of the $40 million construction costs, humbly declined naming rights.) This 1,100-seat space sits on the northeast corner of the Ordway complex, filling in the southeast corner of 5th and Washington and the old footprint of the McKnight Theatre. The Concert Hall was dressed for the occasion with 14.7 linear miles of mahogany-stained oak, a coat of 1,100 or so acoustic panels, and a cloak of glass curtain walls overlooking Rice Park. More than a thousand friends showed up for its society debut and greeted it with cheers and applause.

Perhaps the biggest concern on attendees’ minds was whether or not the space’s new acoustics measured up to their advertising. This was kept carefully in suspense during the first part of the evening; after dinner, the Minnesota Opera Chorus lured patrons to the doors with a staircase performance of the Chorus of the Hebrew Slaves from Verdi’s opera Nabucco. Then, a short welcoming announcement later, the doors opened and a stream of listeners flowed into the new Concert Hall to the strains of music by the Saint Paul Chamber Orchestra. A long musical interval preceded the evening’s formal concert, allowing patrons to wander the space, experience the varied acoustics, and try out different seats. The balance of music and excited conversation in the hall was quite pleasant, with both easily heard and enjoyed simultaneously; hopefully, SPCO will experiment with similar starts to the evening.

The new Concert Hall has a rectangular form, with two wraparound balconies and special balcony-level seating for choristers or extra audience members behind the stage. The seats are comfortable, with well-positioned spots for wheelchairs; the side balcony seats are fixed but angled, creating a much more pleasant experience than the crooked necks common in similar seats at Orchestra Hall across the river. For a rectangular or shoebox concert hall, the space is unusually tall in proportion. This height gives more space for the sound to blossom, without it resounding for too long; it also allowed the designers to create very tall balconies with generously raked seating. The result is a hall with unusually egalitarian seating – each seat has clear lines for sight and sound to travel in – even with very tall people sitting in front of you.

The Concert Hall addition was designed by Tim Carl, a star architect who was recently named CEO of Minnesota’s HGA Architects and Engineers; Carl recently oversaw the lauded renovation of the University of Minnesota’s Northrop Auditorium. The acoustics were designed in consultation with Paul Scarbrough of the Connecticut-based Akustiks firm; construction was overseen by Saint Paul-based McGough Construction. The result is an acoustic space that is perfectly suited to the needs and aesthetic of the SPCO, its primary user and tenant. The ring time is about half a second shorter than the norm for most top-tier concert halls, a small but important difference creating a greater clarity of sound and an enhanced sense of presence. Individual instruments in an ensemble gain additional prominence, and a concert grand piano at the front of the stage has a presence in the top balcony normally associated with sitting in the front row. (The Steinway used on Sunday sounded a little mellow compared to a similar performance in the Music Theater, but the extra brightness was not needed and will not be missed.)

One acoustic matter of interest to performers is that the acoustics of the Concert Hall are not calibrated for vocal music. This is not to say that the general sound of a voice doesn’t carry, but that consonants don’t carry as well as might otherwise be expected. With unamplified voices, this is a simple matter of coaching to accommodate; with amplified voices, a matter primarily of EQ. The massed Minnesota Opera Chorus was easy to understand, but the soloists’ words harder to make out, even in English. In any case, this attunement of performance practice is normal for any new space, and will likely be nailed down well before the Rock the Ordway celebrations come to an end.

Of interest to press, photographers working in this space may have to upgrade their equipment due to the “new definition of silence” touted in the hall’s promotional materials. A typical SLR camera shutter that would have been lost in the Music Theater sounds a little too clearly for sneaking pictures in the Concert Hall; upgrading to a quieter, higher-end camera body or employing a sound-muffling sound blimp is one of the prices to be paid for such clear acoustics.

The last show to play in the old McKnight Theatre was the “Night of a Million Stars” performance on April 28, 2013. That the demolition, construction, and opening took less than two years to accomplish is a remarkable feat, especially with last year’s winter to account for. The opening of the Ordway’s new Concert Hall is a strong addition to the arts scene not just in St. Paul, but to the Upper Midwest in general.