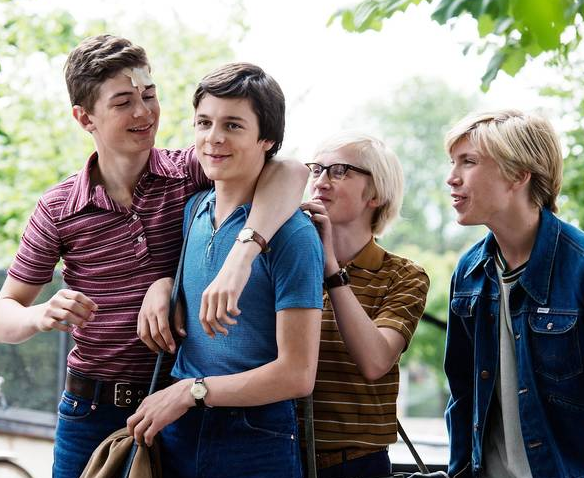 Four teenage boys of Oslo, Norway – Kim, Gunnar, Ola and Zeb – are friends “just like the Beatles.” It’s Beatlemania era – the four lads hear the Beatles and form a band. Yet they don’t have instruments or a place to play.

This enchanting coming-of-age Norwegian film Beatles is adapted from Norway’s bestselling 1984 coming-of-age novel, Beatles, by Lars Saabye Christiansen, set between 1965 and 1974. Beatles follows the adventures of this band of friends in their mid-teens, poignantly depicting their growing pains, joys and insecurities, as they discover their identities in the mid-60s, a time of social and political turmoil.

Kim Karlsen puts Sergeant Pepper’s Lonely Heart’s Club Band on the turntable, as the boys view the album art in awe. The needle drops, while narrator Kim observes, “It was like when God said, ‘Let there be light.” The friends listen in enrapt wonder and their lives are changed, they forget all other stuff boys like, for music. Beatles warmly and humorously depicts the wonders of discovering music as a teen.

The teens form a band, The Snafus (Situation Normal All Fucked Up)  – each taking on a Beatles persona. Ola was Ringo, the smart one; Gunnar, as the good-looking one who sings well – was John. Seb could play any instrument and was the sensitive one – so he was George. As for Kim: “I’m Kim Karlsen. When I was born, the mid-wife said I looked like Paul McCartney. So I was Paul. I wasn’t good at anything. But that’s impressive, too!”

As early teens, the boys played pranks and got into trouble – in a bittersweet scene they symbolically throw their childhood into the sea. They separate for the summer and discover girls. Bored without his band of friends, Kim watches movies he’s uninterested in. At “Zorba the Greek” he encounters a beautiful girl who offers him a bite of her apple, and a kiss, awakening 16-year-old Kim to the pangs and confusion of love. She leaves without a trace, and he writes her hundreds of love letters going nowhere. This is but one of numerous heartwarming and tragi-comic moments in Beatles.

An older brother, Stig, is a rock ‘n’ roll style role model, informing the boys of the atrocities of the Vietnam War, and calling them to action – both in joining protests and forming a band. He helps by introducing them to popular rock band The Snowflakes who lend a helping hand to the boys.

A new girl, Cicelie, enters Kim’s life – he saves her from a snake on a field trip. She thoroughly confuses Kim about love, causing him inner turmoil propelling him into crazy actions that ultimately further his awareness and development of self.

Parents, teachers and older people the boys interact with illustrate the social revolution of the ‘60s, at times, tearing people apart. Gifted with a pen and inspiring words of advice from his gentle, supportive mother, Kim turns from writing love letters to Nina/no one to expressing his inner feelings in novel scale essays, growing into the realization he wants to become a “Paperback Writer.”

There are turning points and the boys gradually come into their own n Beatles– Kim makes progress with Cecilie, her parents and the band, “I have been accepted by the aristocrats, and we have our first gig.” The first concert is in keeping with their name The Snafus.  The boys are faced with big choices, “Save the world, or win back my love.” Their music evolves from Beatles silly love songs style to stuff more (hilariously) sardonic, (and more Rolling Stones sounding) as Kim writes a blues song “Sugar and Salt,” summing up the pitfalls of loving a salty girl like Cecilie who views him like “a rotten hot dog, the skin on her hot cocoa . . .”

Numerous Beatles songs are interwoven beautifully enhancing events and rites of passage in the boys’ lives. Beatles reminds me of, and is on par with,

Swedish punk rock teen girls coming-of-age film, We Are The Best! ˆ Beatles is a remarkably delightful film is rife with heart and humor, and sensitively illustrates the emotional pathos of being a teen that likely anyone can identify with and remember as though it were yesterday.