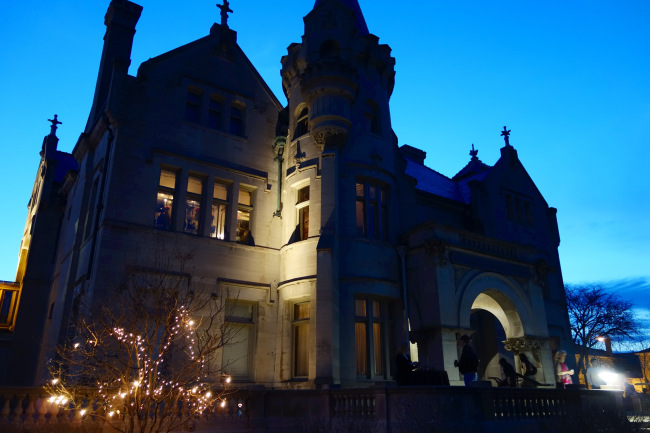 The American Swedish Institute hosted a bash last night that may have raised temperance movement activist Swan Turnblad’s eyebrow. Glasses of local beer and St. Germaine infused cocktails were raised and fires were lit in the Turnblad mansion yards. Rock music crackled into the night sky and Prince Hamlet, a Dane, roamed the house. Saints preserve us!

Walpurgis Night, known simply as Valborg in Sweden is an old celebration that dates back well before the name of Saint Walpurga and her Christian religion was pasted over the pagan celebration of springtime. (No disrespect, she was known for her writing at a time, the 700s, when that was a rare accomplishment for women.)

In Sweden, the last day of April is a time to light bonfires and party. It was historically a time to banish the witches and other wicked things from the neighborhood. According to news reports from Sweden, it is not clear whether the pagans have been tamed yet. 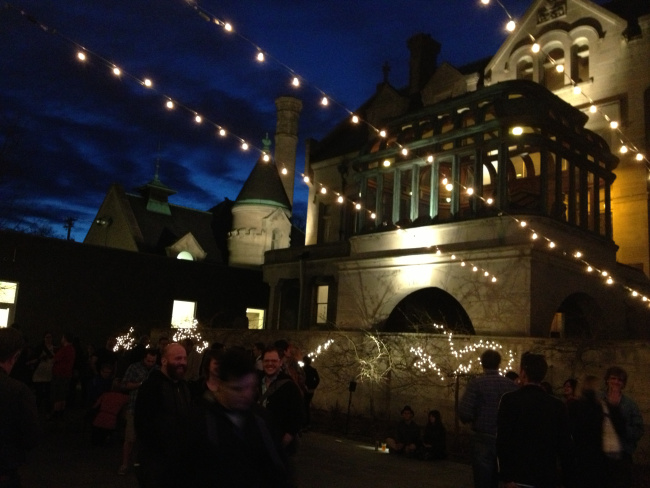 In Minneapolis last night, folks were just too happy that the snow has stopped falling (momentarily) to get unruly. The ASI did a terrific job of putting together a celebration called Cocktails at the Castle. 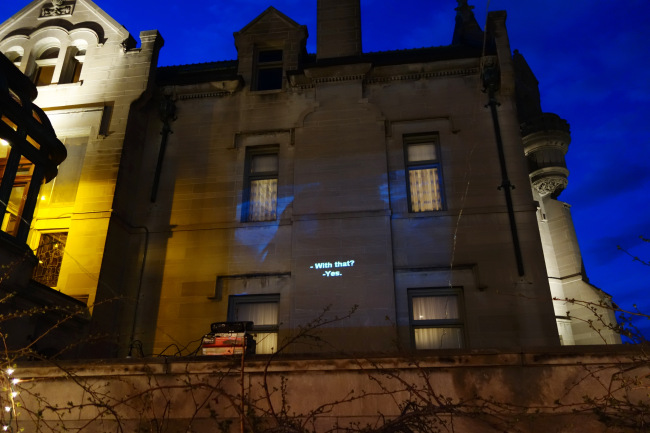 It had all the elements that tickle my Swedish roots–from bonfires and outdoor carousing to arts and crafts and drama in the house. The trolls even loomed over us–lest we forget the beasts we were there to stave off with fire–as the film Troll Hunter was projected against the exterior wall of the castle. 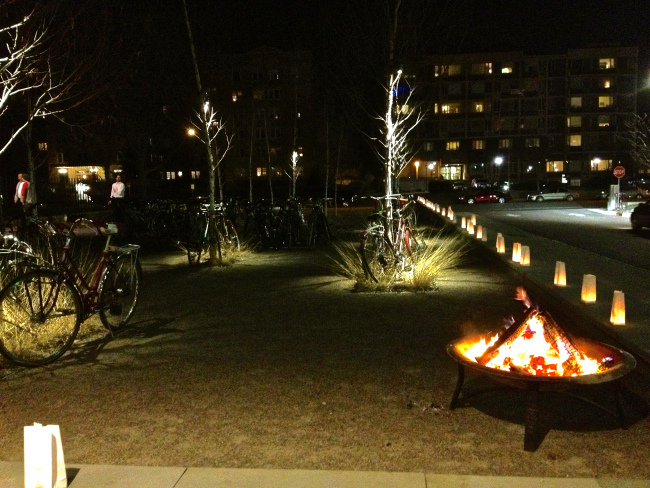 It was cool to see Angry Catfish Bicycle Shop + Coffee Bar was there offering bicycle safety checks and giving riders discounts for drinks. Sweden has a super strong bicycle culture and Minneapolis is on their pedal-pumping heels.

We started our evening with drinks in the courtyard. An Indeed Day Tripper and a French Gimlet–made Swedish by the addition of elderflower fläderblom liqueur. We skipped the long, long food line for Fika’s sausages hot off the grill, cod corn dogs, slaw and beets. Instead we roamed the grounds where fire places were set up and artists demonstrated woodcarving.

Eventually we made our way into the mansion where Theatre Coup D’etat was staging scenes throughout the house from their current production of Hamlet. We also checked out the current exhibit Eight Seasons in Sápmi, the Land of the Sámi People. 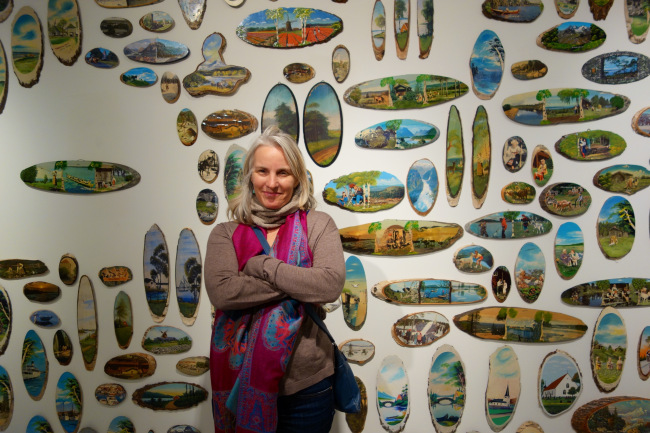 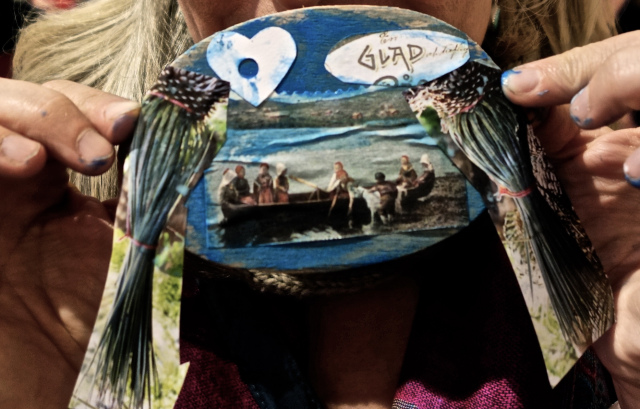 Back in the Nelson Cultural Center, the new addition side of things, we visited the exhibit without a name (#NameThisExhibit: 1,200 Birchwood Plaques from Sweden’s Post Futuristic Society). The Osher Gallery walls were filled with 1,200 tiny works of decoupage art on slices of birch curated by artists Borghild Håkansson and Staffan Backlund. It inspired me to go back to the lobby where craft tables were set up. It was so pleasant to listen to SlipMats Radio (DJs Adatrak and D’Jo) while creating my very own super kitsch art. We missed artists from Soap Factory creating birch wood plaques in 30 minutes for the crowd. 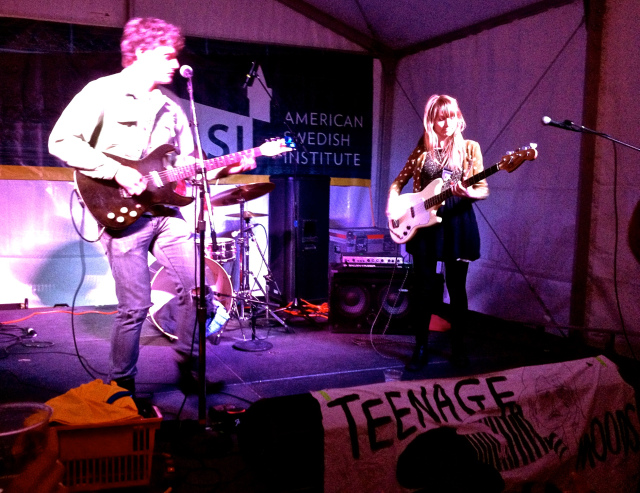 We finished the evening in the courtyard, curious to hear the live band Teenage Moods. After some impressive fire dancers performed, the band took the stage and got people grooving to the beat of their loud, punky songs with lyrics that were mostly sucked into the noise of the instruments but I caught snippets of sweet and funny things. Other acts during the evening included Dan Mariska and the Boys Choir, and Zac HB. 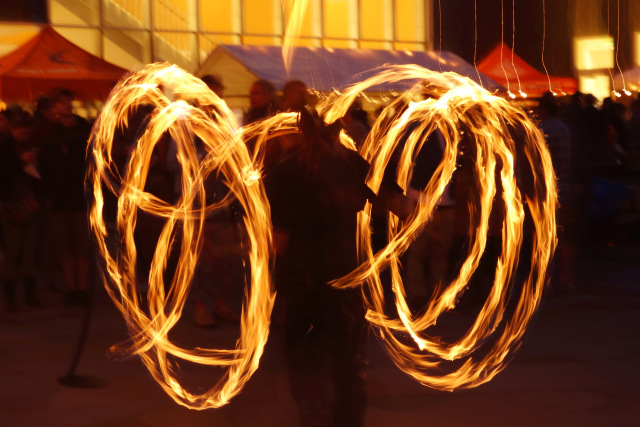 The event at the American Swedish Institute was a reminder that the old ways remain in spirit, never completely banished but transformed in ways that celebrate our persistent seasonal instincts to be wild and creative things. We survived winter–welcome beautiful May! “Sköna Maj Välkommen!”

(Fab photos (most of them) by Jack Steinmann)

*Thanks to Runar Patriksson of Töcksfors for the quote, “”Sköna Maj Välkommen!”