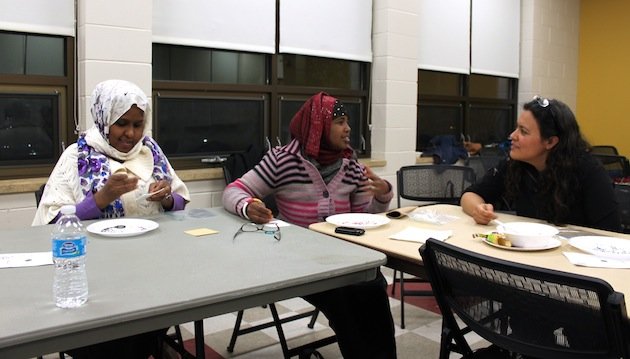 Somali and Native American women discovered shared cultural similarities at a small group meeting at East Phillips Community Center on October 21. Fowsiyo Aden noted that there is a structure in Somalia called a qualdo, which reminded her in its similarity to the teepee. She also said they have buffalo in Somalia.  Easy laughter followed when Rukia Mohamud asked if they milk the buffalo here. There are buffalo in Somalia but they are wild, while domesticated  camels are milked.

Native bead artists taught Somali women how to bead, working on a simple pattern for a key chain. The gathering was the first of several meetings of this kind, working in conjunction with The New Native Theater, aimed at fostering understanding and friendship between Native American women and Somali women.

The beading followed a shared meal of Somali and Native American foods.

Emmy Her Many Horses made a Lakota buffalo stew with buffalo from her family’s ranch in South Dakota. An Ojibwe wild rice stew, wild blueberry sauce and Pepsi rounded out the Native fare. Somali women contributed beef stew with basmati rice and a big lettuce salad with bananas.

Patty, a professional beader and retired teacher, a Shoshoni from Idaho, said “I learned to bead from my mom, brothers and grandparents. The number one thing for beading is patience.”

Mariah, a Lakota woman, came to assist Patty, quietly moving among the ladies showing them the beginning steps for the key ring.

The small group of women brings intimacy to this exchange of cultural heritage. As in many groups of women, talk flowed freely, with interests of family, education and arts filling in the occasional silences.

Kasa Hohenstien, whose kids attend Anne Sullivan school, where half of the students are Somali and her children have Somali friends, came to get to know more about Somalia and its culture. Terry Yellow Hammer, from Standing Rock Sioux tribe and an urban Indian, said, “It’s nice to be around a bunch of women.”

The Somali community organizer of the Native American Somali Friendship Association, Amina Saleh, translated for several of the Somali women whose English skills are still developing. (Norma Smith is the Native American community organizer for the group.) Rukia Mohamud has been in this country for only three months and everything is new for her. Amina Shuriye had been here for eight years and is happy to be living here, after first living in a refugee camp in Kenya. One of her children, daughter Rabio, tried her hand at beading on this evening. Fowsiyo Aden, a smiling outgoing woman, diligently working on her beaded ring, mentioned that there are also tribal people in Somalia.

Rhianna Yazzie, the artistic director of The New Native Theater hopes to produce a play out of the discoveries the women unearth as their new friendship ensues. “The process is more important than the play,” voiced Yazzie. ” Here we get to know each other in a different way, over dinner and a new activity.”

As Patty said earlier in the evening about the art of beading, “Keep trying and trying. The more you try the better you get at it.”

The same can be said for a developing friendship. At the November meeting of the Play Circle, a Somali henna artist will teach the art of henna application.

CORRECTION: The first paragraph originally implied that buffalo are milked in Somalia — that’s not correct! The question referred to camels: Easy laughter followed when Rukia Mohamud asked if they milk the buffalo here. There are buffalo in Somalia but they are wild, while domesticated  camels are milked.

Amina Saleh, Fowsiyo Aden, and Rhianna Yazzie get to know each other through beading.

Doing the work and eating the food

Bead artist Patty, and community organizer Naomi Smith, get the strands separated for selection by Rabio and Rukia

Patty instructs Rabio on her technique.