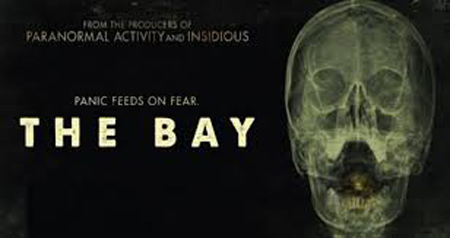 What I’ll Tell You At the Bar:

The Bay doesn’t make it out into the deep waters it sought, but it doesn’t drown in the shallows either.

What I Really Think:

I went on a family trip to Green Bay, Wisconsin, last weekend. On our way to dinner one night we drove over the Hwy 54 bridge which spans the Fox River. The Fox River flows out into Green Bay and eventually is carried out into Lake Michigan. I happened to look out the window as we crossed the river and took a long look upstream toward the southwest. The river was dotted with a few small marinas and individual docks, but mostly the shore was dominated by looming mining companies and a large paper mill. I suppose there is nothing inherently dangerous about either of these industries, but I couldn’t help but wonder when it was exactly we, as a civilization, thought it was a good idea to build huge industrial facilities next to the resource that all life depends upon.

This feeling also lies at the heart of The Bay, an eco-horror film that is now available on demand and DVD. In this film, a large industrial facility is under investigation for polluting the Chesapeake Bay to high levels of toxicity. As a couple of scientists discover the havoc that this pollution has brought to the Bay, the results of the pollution wreak havoc on the coastal town about to celebrate the opening of tourist season. You know, like Jaws.

Initially, the attack manifests as a violent illness the resembles a biological weapon, but that spreads and the organism grows into a more visible parasite. The best theory the scientists in the film can come up with is that hormones from the chemical pollution accelerated the growth and life cycle of some of the bacterial life which live in the bay. Less dramatic and violent events like this have actually been documented, so it’s not that far-fetched. The Bay is much closer to science fiction than horror.

The Bay is presented as a found-footage film, ostensibly presented by a young reporter who is finally able to face the horror she lived through in 2009. Her story provides a view of the outbreak as an outsider would see it, and she has access to other media which document the attack from different points of view. Police dashboard cams, a vacationing couple’s iPhone, hospital security cameras, video blogs and many other electronic eyes all help show the destruction and gore. The film handles these sources in a fairly straightforward way, which helps give the film an authentic feeling but also makes the film feel disjointed. There are times where the camera’s faults limit the tension and weaken what otherwise might be terrifying scenes. The tropes of found footage filmmaking are given their due, too, and that doesn’t help much either. If you’ve seen many of the recent movies in this niche, you’ll recognize the “surprises” before they unfold. The Bay does little to become an exception to the sub-genre, which is obviously something it was trying to do.

Taken as scenes, parts of the film provoke alternating chills and disgust. The initial breakout is depicted very well and with “realism”. Rather than forcing some faux documentary approach, the camera is left to watch as an inexperienced documentary filmmaker would approach it. At a distance, not really knowing where to focus and lacking an instinct for what may happen next. These scenes have something of a 70’s feel to them; recalling both The Andromeda Strain and Cannibal Holocaust. As the creatures get larger, we lose that influence and start to drift closer to eighties creature films like Night of the Creeps or Humanoids from the Deep. This is something that will entertain horror fans, but ultimately it diffuses the general dread that the first part of the movie created. After this, the film shifts into survival horror mode, more closely resembling the recent found footage films. This is also when most of the energy leaves the film and we are left to watch what is a rehash of an escape scenario we’ve seen many times before.

Horror fans have a general distrust of the mainstream filmmakers that occasionally make trips into the rough neighborhoods that genre films thrive in. While many horror filmmakers have gone on to mainstream success, there are very few examples of established Hollywood filmmakers who have never made a horror film being able to make a good horror film. Frank Darabont is one example of a filmmaker who moves pretty well between mainstream and genre productions. Strangely, Barry Levinson, known for films such as Bugsy, Diner and Good Morning Vietnam, occupied the director’s seat for The Bay. Honestly, this is the only reason I decided to watch this film, given that little else made it stand out as something other than improved SyFy Saturday fare. I was intrigued that Barry Levinson would even make a horror movie, and I was equally curious how he would approach it.

Judging from the format and style of the film, it’s clear that he and his crew did their homework. There is plenty of imitation by way of homage throughout. Many filmmakers will study earlier films to help them conceptualize the current work, and Barry Levinson makes no effort to hide his master’s study in horror film history. Sadly, this doesn’t make for a horror masterpiece, but instead a disjointed pastiche of style and effect that leaves the viewer feeling confused and disconnected from what could have been a deeply troubling film. Poe believed that horror should aim for a “singular effect” and The Bay insrtead strives for many simulteneous effects.

Most of the performances are naturalistic and believable. The supporting actors don’t overact and betray that this is not really a found footage project. Unfortunately, the segments narrated by Stephanie (Kristen Connolly) do feel fake, and it is very hard to tell if she’s overacting because she is an inexperienced news reporter, or because she is actually overacting. This acting undercuts scenes which were critical to sustaining the singular fear and horror The Bay needed to succeed.

Overall, The Bay doesn’t completely reach the high standard it set for itself. Maybe it gets in its own way too much, because I had the feeling that Barry Levinson had a story he wanted to tell about eco-disaster and thought he had the right vehicle to do it with. To his credit, the film avoids the really pedantic kind of lessons which often infect the films of M. Night Shyamalan, but it puts such an emphasis on the big themes that the supporting details are lost.

This is all unfortunate, because it’s clear that Barry Levinson took this film seriously and sought to elevate the genre that is often seen as the lowest common denominator in filmmaking. This outside filmmaker has shown, in some ways, a clearer understanding of what this kind of movie can be than many of the regular practitioners. He set his sights a little too high though, forgetting or not seeing the small details that propel a solid horror film. He gets things right that many genre filmmakers don’t even seem to think about, but along the way he neglects the basics. Like the Chesapeake Bay itself, the film is infected by ambitions that exceed its capacity.