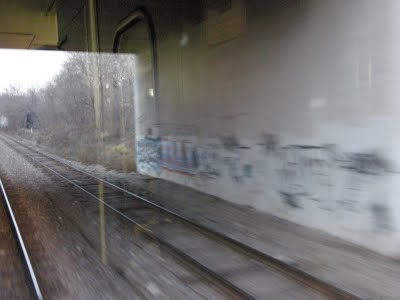 Jeff Skrenes — who, a moment ago, posted video about the most recent Hawthorne Huddle — passed on some information which was related to him at that meeting from County Commissioner Stenglein, which Stenglein asked SPECIFICALLY for Jeff to pass on to Johnny Northside.

It turns out that before the new Northstar Rail Line was fully up and running, County Commissioners and other dignitaries took a ride on the planned route.

Naturally, they saw the incredible amount of graffiti along the route, which I complained about in a previous blog post. And, of course, these public officials said, “Something needs to be done about all that graffiti!” So, as it turns out, the Northstar route was scrubbed clean of graffiti shortly before it opened.

However, faster than crabgrass the graffiti came back, and now it looks as bad as ever. Word is the authorities are determined to clean up the graffiti on the route and will be making a renewed effort.

For that matter, heck, call it in while you’re on the BUS LINE. What else is there to do while riding the bus?