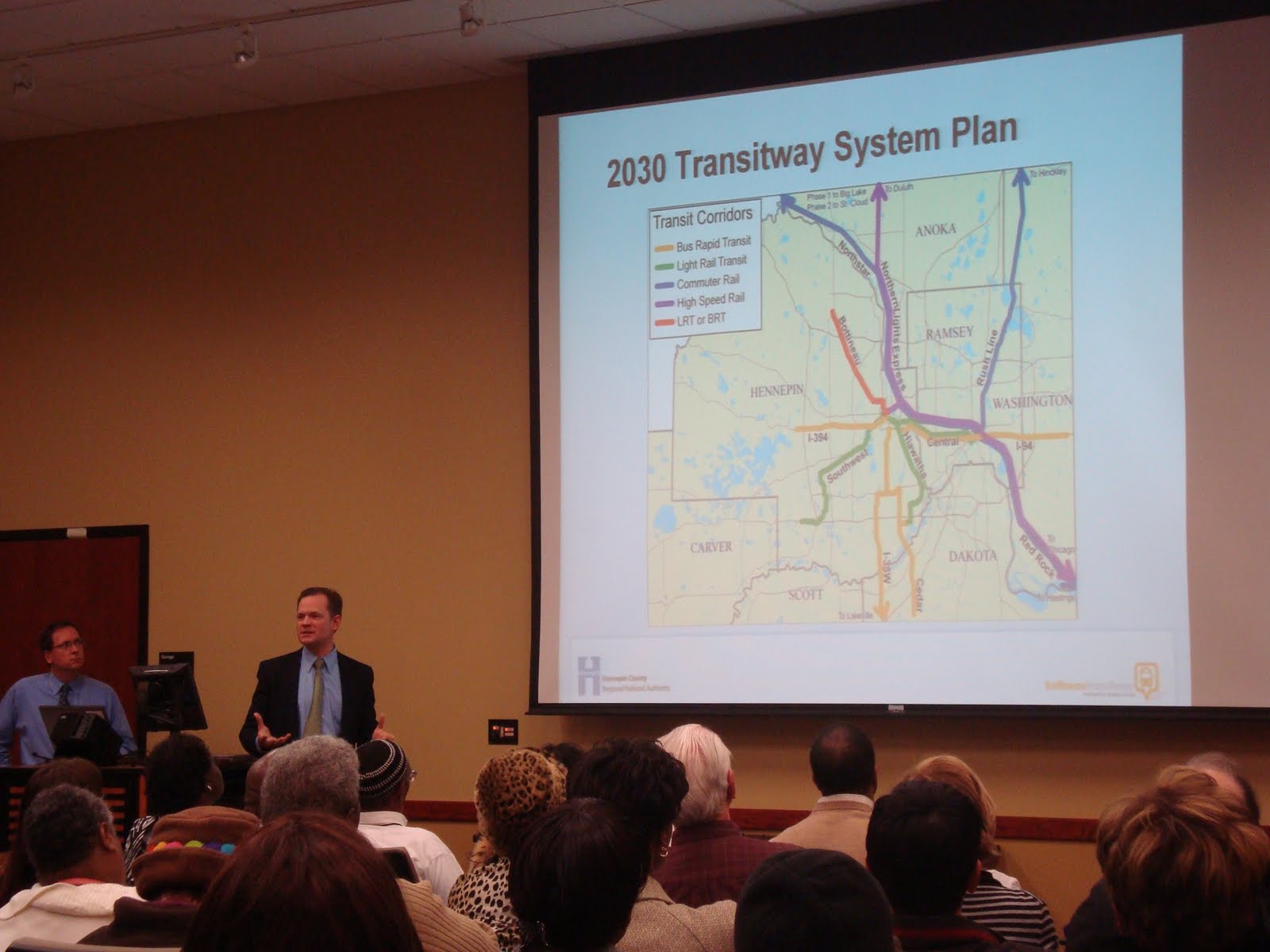 A couple nights ago at UROC, a large community room was packed to standing room-only capacity during a neighborhood meeting about light rail options in North Minneapolis. Most of the main city, state and neighborhood movers and shakers were there, as well as assorted political wannabes who — thankfully — didn’t shout and disrupt the proceedings.

As complicated as the issue of NoMi light rail may be, the debate really boils down to two main options: Will the light rail come through the heart of North Minneapolis — along Penn and Broadway — or will it skirt the areas with people and businesses, going along the existing rail corridor at the edge of Theo Wirth Park?

There are trade-offs for either option, which are labeled D1 and D2 by the transit geeks. D1 is “Theo Wirth” and D2 is “Broadway and Penn.” Rather than using alpha-numeric gibberish to talk about something tangible and real which will impact human beings, I’m going to insist on using the terms “Theo Wirth Route” versus “Broadway/Penn route.”

IF THE LIGHT RAIL AVOIDS THE HEART OF NORTH MINNEAPOLIS and goes along the edge of Theo Wirth Park, it will be cheaper initially, but will have little positive economic impact because there are no people and businesses located in the park and putting the rail there won’t spur anything to develop. This route will also be marginally faster by a minute or two because there would be less stops. People who live in North Minneapolis and want to access this route will have to use “feeder buses.” (In this way, we will become the “chum” which is “fed” to the “feeder buses.”)

Going along Theo Wirth park will allow suburbanites from Maple Grove and the affluent part of Brooklyn Park to avoid passing through North Minneapolis while sipping their Starbucks lattes and reading their morning paper. One can’t help but note there is no push from the suburbs to RAM THE RAIL THROUGH THE HEART OF NoMi. No, rather, the suburbs seemingly want the light rail to themselves and wish to share it with North Minneapolis as little as possible. They would prefer lovely arboreal views of Theo Wirth Park over, for example, stores along Penn and Broadway where one could buy a nice bottle of wine to take home for dinner. Things conveniently located at Penn and Plymouth include UROC, Urban League, Northpoint Health and Wellness, and a lot of vacant land for development. There is also talk of a Minneapolis Public Schools Headquarters near that spot, with a grocery store. Some of this talk came up recently at a WHO meeting, according to one of my sources.

IF THE LIGHT RAIL RUNS DOWN BROADWAY AND PENN, it will spur tremendous economic development in areas where such development is needed the most. Planned rail stops would include Broadway and Penn, Penn and Plymouth, plus Van White Boulevard and Highway 55.

At the meeting, some individuals brought up the ghost of St. Paul’s Rondo Neighborhood and talked about how light rail would somehow cut neighborhoods in half. Of course, a light rail is nothing like an interstate highway. You can walk right across the tracks. Any property lost in the course of widening streets, any parking sacrificed for the sake of mass transit would be made up for many times over by the increase in property values and the business revenue generated from potential customers riding the light rail. Some in the audience expressed worry about the light rail going through the heart of NoMi, but one member of the audience — Matthew McGlory — urged listeners to read “Powernomics” and to see the light rail as opportunity, not something negative.

One woman expressed a fear that if light rail came down Penn Ave North that “children won’t be able to play in the street.” To which I respond as follows: if your children are playing in the street on Penn Avenue North, you have much worse problems than light rail coming through. I’m just saying. Another participant at the meeting passed out a news release invoking the ghost of the Rondo neighborhood and announcing a recently filed lawsuit over the Central Corridor Light Rail Project.

State Rep Bobby Jo Champion put things well by saying, “Even if something was not intended for our good, we can MAKE it for our good.”

Knowing the final light rail route will impact the development of our neighborhood for the next century, this blog will go all out to inform readers and relay information about the light rail. Getting the best option for our neighborhood will take a massive effort to be louder and more organized than the poverty pimps who want to keep NoMi from changing for the better, and also the suburban crowd who want to hog the light rail all for themselves.

Some revitalizing neighbors have started public conversations about how to begin organizing and lobbying to make the Broadway/Penn route become the reality. One neighbor, Jordan neighborhood super-volunteer, Megan Goodmundson, has sent emails to several active list servs to drum up interest and help in organizing the movement for Broadway/Penn.

Any JNS readers who want to get involved, want to express their thoughts, interest and support for the Broadway/Penn route should email Megan at goodponyz@yahoo.com so that a broad list of supporters can be built.

This is an extremely important issue and NoMi needs all hands on deck to pull this one through the governmental red tape.