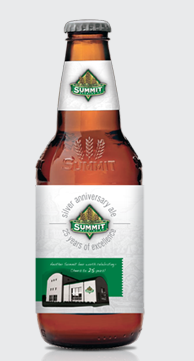 Friday, July 29 (i.e., tomorrow), Tracy’s Saloon will host a six course dinner to celebrate the launch of Summit’s 25th Anniversary Ale, which in turn celebrates the St. Paul brewery’s quarter century in business. Founder Mark Stutrud will be on hand to speak and mingle.

I’m a big fan of Tracy’s Saloon – I eat lunch there at least once a week (it’s a couple of blocks from my office, and their Friday night cheap date night (two salads, two entrees, dessert and a bottle of wine or pitcher of beer for $28) is one of the best deals in town. A couple of years ago, I went to another Summit beer dinner at Tracy’s, and had a terrific time.

According to the press release, Summit’s 25th Anniversary Ale “will be a robustly flavored and full-bodied ale. Alcohol is to be around 6.5% abv with bittering units at 80.” Sounds like they will be giving that hoppy newcomer, Surly Furious, a run for its money.

Meanwhile, Burger Jones at 3200 W. Lake Street is offering a more plebeian beer dinner at 6:30 p.m. on August 8: three different sliders (black & blue, bacon and cheese, and mushroom and Swiss), served with fries and a flight of four Brooklyn Brewery ales. Then you get a pint of your favorite Brooklyn Brewery ale, followed by a mystery beer that ‘ll “leave you wondering what dessert really is.” Guess it must be pretty sweet. Cost is $25 plus tax and tip; call 612-746-0800 for reservations.