by John Hoff | August 4, 2009 • Some nights ago, a friend called me…sort of indirectly. She had run from her basement apartment, screaming, because there was A FREAKING BAT FLYING AROUND INSIDE. She ran, leaving her phone, and went upstairs, leaving shoes, car keys, purse…her whole life, really, down there with the bat. Even her Rottweiler was in retreat, but only because he was doing as told…

I’m not saying the Rottweiler isn’t brave. No, not at all. Note the photo, entitled “Hogan, Killer Dog” where he poses next to a dead mouse. Word is he licked the rodent to death. 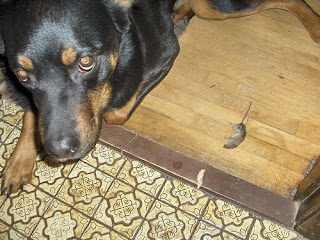 So my friend needed to call Johnny Northside because, well, I’ll just brag on myself and say it: I have a notoriously strong stomach, click here, and I’m kind of oriented toward taking decisive action. It may not be the right action, it may lack a certain finesse, but damn it…I take action.

I’ve had some experience with taking out bats, learning the skill from my saintly mother. She would go after a bat in our rural house with a broom and dustpan. She’d scream the whole time, but that bat would get the worst of it and end up–dear god!–in a blazing Franklin stove. So I knew the traditional Hoff family tools needed for the job: broom and dustpan. Oh, and my black National Geographic shirt with a picture of a bat, to get myself in the mood and add a certain flare to the moment, because YOU KNOW people will be taking pictures.

My friend called another friend who had my number, because in this modern era people don’t have phone numbers memorized; they just program the numbers into their cell phones. The friend called me and said how I was NEEDED, VERY VERY NEEDED.

An escort was sent to pick me up. The wimmin-folk were out in the yard. The bat could be ANYWHERE downstairs, or even in the stair landing, I was told. And right then I thought of that moment in the movie Aliens when one of the Marines was complaining, oh, it’s going to be another “bug hunt.” I figured I’d be searching for hours, turning up NO BAT, and then the next morning somebody would find it inside the medicine cabinet next to the toothpaste.

I checked the stairway. No bat. I went downstairs, hoping the little bat bastard would be flapping around, so I could get a bead on him with my dustpan six shooter, but no such luck.

“I’m going to have to check every ceiling beam,” I thought. “And then I still won’t find it. Damn it.”

So I went to the far corner of the basement, so I could look systematically, and WHOA! There it was, like a little square furry rat attached to the wall, trying to be oh-so-inconspicuous after the spectacular air raid about fifteen minutes earlier, Vroooooooooooooooooooooom.

I figured I had one good shot at him, and I better whack him good with the candlestick…oh, wait, I mean the broom. Sorry. NoMi in-joke. It wasn’t that I WANTED to kill the bat–I would have preferred to capture him and release him into a happy bat wilderness, with a little Wild Kingdom tracking tag, to learn his mysterious ways–no, SERIOUSLY–but I didn’t think capturing the bat was as feasible as killing the bat.

So I tried to whack him with the broom, hard. And all of a sudden, I had a flipping, flapping, furiously clicking bat which ended up somewhere behind a wire DVD rack. Now the epic battle was on!

I knocked the rack aside, spilling DVDs eveywhere, trying to trap it in the broom bristles. The bat somehow ended up in the wire rack, like a cage, making furious vertical moves–baring its needle-like fangs at me–but trapped. Then it got out the end of the wire rack, and then I lowered the broom on it, trapping it. I shoved the dustpan under the broom and then–sweet victory!–I had it like a furry bat sandwich between broom and dustpan. Kip Browne, the chair of the Jordan Neighborhood and therefore, by implication, having a vested interest in the safety of the residents–including being safe from vampire attacks–was videotaping the whole time.

And I said, going up the stairwell, “You women might want to get back.”

The wimmin-folk fled, screaming, into the back yard with the Rottweiler right on their heels. I should point out he was only running because his mistress was running, he’s actually VERY BRAVE.

Incredibly, the bat was working its way free of the bristles and was actually hanging off the end of the dustpan as I walked toward Jordan Pond. It didn’t even appear to be injured. Jeff Skrenes–Housing Director of Hawthorne, and therefore also having some interest in bat infestation issues–tells me he once went after a bat with a towel and a frying pan. Despite smacking it with the pan, Jeff’s bat was not dead.

Bats are tough, I tell you, like little flying balls of leather. They probably wouldn’t be much good to eat, but here’s something interesting I found online that I’d like to try, click here.

While I stood there with the broom and dustpan, the bat worked its way loose and flew away, apparently none the worse for wear.

Well, I thought, that’s good. Bats eat their weight in bugs every night.

Bats are our flying furry friends.

But I’d probably love them a lot more in this interesting dish, click here for video.