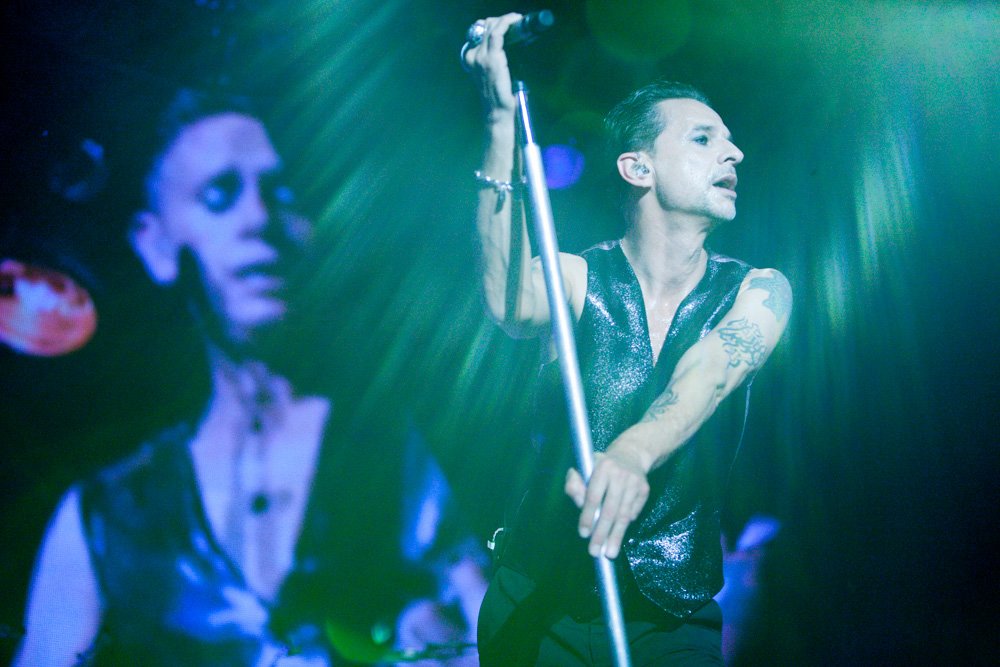 The conditions on Tuesday, August 27 at the State Fair for a concert were far from ideal. The heat index was 99ºF. The setting sun shone full on the Grandstand. Any breeze was minimal.

The seats were mostly empty when Bat for Lashes took the stage. By the time they left, sections of the audience were dancing, despite the temperature and humidity.  It was no small feat, but singer Natasha Khan managed it with quiet charisma and a broad variety of rock styles. She opened with “Lilies,” the first track off her most recent album, The Haunted Man. It was a good choice for a heat-dazed audience. Reminiscent of early Tori Amos at her most lyrical but missing the raw pain, it was deceptively smooth but powerful. It gave without demanding.

Bat for Lashes’ set was a tour of musical styles from the late 1970s through the early 1990s. Indie dance gave way to New Wave pop gave way to guitar-driven art rock. Over all of it Khan’s voice floated. Sometimes she drove nearly to a crescendo, then fell away, leaving an ache behind like an unresolved melody. Only with “The Haunted Man” and “Daniel,” her last two songs, did she really let go and power through.

Introducing the songs, Khan sounded almost timid, someone addressing a friend in the same room rather than an arena-sized crowd. A sinuous dance during the start of “All Your Gold” was lost to the distance. Nor could she fill the space physically. Her voice, however, was more than up to the task, though there was the occasional flat note. Her voice and drums that never allowed the audience to get complacent won her the approval of a crowd all too obviously there to see Depeche Mode.

The night’s main act had it a little easier. The sun had gone down. A breeze had blown up. The crowd was there for them.

Depeche Mode still got off to a slow start. They opened with “Welcome to My World” and “Angel” off Delta Machine. Not only was most of the audience there for nostalgic purposes, but the bluesy tone of this new album doesn’t play to Depeche Mode’s on-stage strengths. Dave Gahan was clearly into what he was doing, but this meant he spent these two songs nearly doubled over with the intensity. Thankfully, the video screens still gave plenty to watch, courtesy of filmmaker Anton Corbijn.

With “Walking in My Shoes,” the concert stepped onto firmer ground, though perhaps it would be more fair to say it pranced. Gahan has always been at his best on stage when he is strutting, and here he looked like the love child of Mick Jagger and Ru Paul.

A series of old favorites kept the energy level high. When Depeche Mode returned to Delta Machine for “Should Be Higher,” the audience was happy to come along for the ride.
Martin Gore had his chance to shine on stage with “Higher Love” and “Shake the Disease.” His voice has held up better over the years than Gahan’s, and the minor-key melodies of those two songs held their own intensity.

Unfortunately, the band chose two more songs from Delta Machine to bring them out of this quieter moment. “Heaven” and “Soothe My Soul,” the first two singles from the album, are fine songs in themselves, but they’d have been better served by following higher-energy material.

Then it was back to old favorites for the rest of the evening. “A Question of Time” provided one of the few sour notes of the evening. Gahan chose to have the audience sing the chorus of the song, perhaps because his voice isn’t up to the high notes anymore. The song boasts a chorus, however, that’s complex with a non-intuitive melody. Almost no one remembered it well enough to sing it without hearing it first. The general attitude was one of confusion, and Gahan appeared visibly frustrated.

Luckily, the set quickly recovered with “Enjoy the Silence” and “Personal Jesus,” which had everyone singing along. The show closed with a five-song encore of older crowd-pleasers, including “Just Can’t Get Enough” and “Never Let Me Down Again.”

With a band that has a catalog as large as Depeche Mode does, what gets left out of a concert is sometimes as interesting as what gets played. There was a time when it was unthinkable for the band to play a concert without including “People Are People.” After they’ve matured and reinvented themselves time and again, however, the song that made Depeche Mode famous wasn’t even missed.

This show was a solid performance from an old crowd favorite, exactly what you expect from the State Fair. With a few tweaks, it would have fit its audience better, but in the end, it gave everyone enough of what they were looking for to send them home happy.