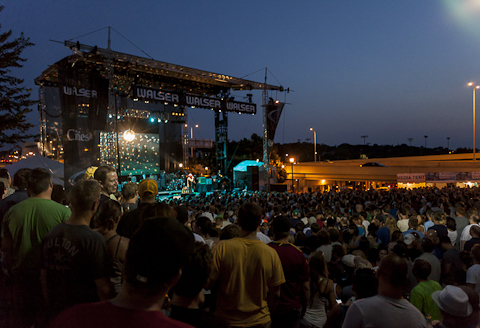 Having known nothing else but Milwaukee radio that’s so bad a website like this exists, it was nice to not only adopt Cities 97 and The Current upon moving here, but also their accompanying annual concerts. The Basilica Block Party and Rock the Garden carry allegiances just as their radio stations do and lie at opposite ends of the spectrum. At Rock the Garden, people meander about freely or stake a spot on the hill with their blanket to relax. At Basilica, it’s an elbow-throwing, expensive-cheap-beer-drinking, USA-chanting pile. This year’s BBP on Friday and Saturday, July 6 and 7 was no exception to my sweeping generalization, but also completely exceptional musically.

Last fall front man Jonathan Russell of The Head and the Heart smashed his guitar at the Cedar Cultural Center’s stage out of something other than overzealous enthursiasm (possibly frustration with audio technicalities). Their performance at the Sun Country Stage, thankfully, went more their way. The six-person band was in its prime Friday night, showing off their pretty little self-titled debut album (2011). Charity Rose Thielen, a Minnesota native who had family in the audience, prompted cheers from the crowd (not a rare occurrence) with her vocals in “Rivers and Roads” with an extra dose of poignancy when she sang the line, “Been talkin’ ‘bout the way things change / My family lives in a different state.” Thielen asked the audience if they were excited for Train, then quipped, “I never thought I’d say that.” For that reason, it did feel like a mixed crowd. I’m really not sure if they made any converts out of the Train fans, but the people there to see them left satisfied (finally). The Head and the Heart, of the bands I saw, were the only ones to show explicit support of gay marriage—the issue that sparked a large protest and boycott last year but seemed to quiet down this year, despite the upcoming amendment on MInnesota’s ballot in November. Josiah Johnson (vocals, guitar) and Tyler Williams (drums) sported orange “Vote No” shirts during the set.

An aunt of mine, when she heard I was seeing Train, cooed, “Oh they are so fun.” I thought I’d give them a shot in an attempt to discern what exactly it is that makes them so bizarrely popular. I liked “Drops of Jupiter” and “Meet Virginia” back in high school. Yeah, they’re good songs (probably the best of the band’s repertoire), but are they good enough to make fans of the current high school generation? (I guess the answer is, yes? Apparently.) Train entered the stage with—you guessed it—train sound effects (or did you, because it’s so ridiculous). Pat Monahan’s voice cracked during the first song or two, but that didn’t put a damper on things. The Twilight-meets-50-Shades-of-Grey crowd loved every second: a couple got engaged (Monahan’s behavior made me think it wasn’t the first time it’s happened), a few cute blondes were brought on stage to dance around, Monahan threw out t-shirts, grabbed fans’ cameras to take a selfy, and tweeted … all while impressively spitting out lyrics. With the freaky weather on Friday night, Train cut their set 15 minutes short. There was going to be no encore. Instead Monahan intimated to us that they were going to play three more songs—the three he thought we’d want to hear the most. So I think I get it—I don’t understand necessarily, but I get it. They’re not only radio mongers, but crowd pleasers too. It’s all about us. And that’s sort of nice sometimes.

The Lumineers from Denver, CO found a nice little niche here in Minneapolis. The Cities 97 radio announcer, at the end of their set, said he had indeed seen a crowd this big before, but never for the first opener. Sure, the band was opening for much-loved bands like Fitz & the Tantrums and The Avett Brothers. But in my location all the way up in the front, there were a good amount of people who left after The Lumineers’ exit. It seemed to me, too, that The Lumineers had never performed in front of such a big audience either. The band played pretty much every track (if not all) from their 42.5-minute self-titled album (with a few other songs) in an intimate manner in a not-so-intimate setting.

Fitz & the Tantrums, on the other hand, knew exactly how to get down with the massive crowd (at one point literally), making it feel like one big dance party. Noelle Scaggs and Michael Fitzpatrick came out running and amped up an already-amped-up crowd, with a crowd-surfing stint from Fitzpatrick. Fitz thanked the crowd for recognizing “real music, otherwise we wouldn’t be here.” It was a refreshing, Bon-Iver moment, especially in light of the Train concert the night before. It’s obvious they’re a favorite of Cities 97, appearing at Basilica last year in the second slot at the Walser Stage (this year at Sun Country but in the same slot) and on the Cities 97 sampler this year with “Don’t Gotta Work It Out.”

The main attraction for me this year was The Avett Brothers. If you’re unfamiliar with the band, take a look/listen at/to their NPR Tiny Desk Concert (you won’t regret it). The brothers & co. played a well-rounded set with songs from Mignonette (one of their first albums), a handful from their most popular I and Love and You (you haven’t really appreciated “Kick Drum Heart” until you’ve seen it live), and their new single “Live and Die.” Scott Avett played the strings off his banjo(s), Joseph Kwon did the same with his cello (along with the horse hairs on his bow), and Seth Avett was a real-life guitar hero. They absolutely floored me, to say the least. It’s concerts like this that make the pain of standing for hours at a time and experiencing a non-stop violation of personal space totally worth it.

Listen to my favorite song from each set on my Spotify BBP 2012 playlist.

The Head and the Heart