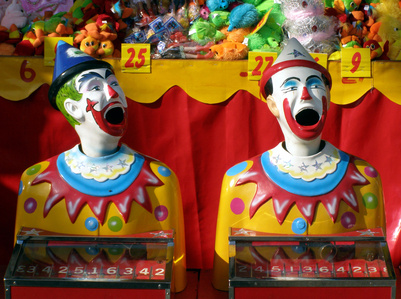 Bill Moyers, as usual, gets it really right:

Forget what you learned in civics about the Founding Fathers — we’re the children of Barnum and Bailey, our founding con men. Their freak show was the forerunner of today’s talk radio….

[Media scholar Henry Giroux] describes the growing domination of hate radio as one of the crucial elements in a “culture of cruelty” increasingly marked by overt racism, hostility and disdain for others, coupled with a simmering threat of mob violence toward any political figure who believes health care reform is the most vital of safety nets, especially now that the central issue of life and politics is no longer about working to get ahead, but struggling simply to survive…

[Josh Marshall has] offered the simplest and most accurate description yet of a public insurance plan — one that essentially asks people: would you like the option — the voluntary option — of buying into Medicare before you’re 65?

As Congress returns, the prospects for real health care reform seem ever dimmer. And neither Congress nor the White House is seriously talking about legislation to address the other, on-going crisis of a “jobless recovery.” Bob Herbert warns in the op/ed pages of the New York Times:

Politicians talk about it, but aggressive job-creation efforts are not part of the policy mix.

Nearly 15 million Americans are unemployed, according to official statistics. The real numbers are far worse. The unemployment rate for black Americans is a back-breaking 15.1 percent.

Five million people have been unemployed for more than six months, and the consensus is that even when the recession ends, the employment landscape will remain dismal.