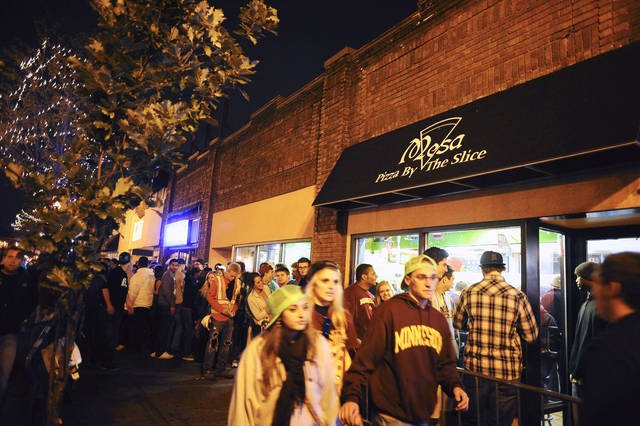 Late-night crowds line up for a slice of Mesa Pizza during homecoming weekend Oct. 14, 2012, in Dinkytown. (Daily file photo by Mark Vancleave)

Dinkytown businesses are considering a policy that would ban unwanted patrons from the entire business district.

Minneapolis police recommended a “geographic trespassing” policy at the Feb. 13 Dinkytown Business Association meeting. The policy would permit police to ban someone from the whole area if they are kicked out of a business and issued a trespass warning.

But all of the businesses have to agree to the policy before Dinkytown implements it.

Under the policy, business owners would call police, who would then record the disorderly patron’s personal information and take pictures. Offenses would include shoplifting, aggressive panhandling and even being booted from a bar.

Once ejected, offenders wouldn’t be able to return to the area for a year. Violation would result in a misdemeanor charge and arrest for every intrusion after that.

Minneapolis police 2nd Precinct Crime Prevention Specialist Nick Juarez said the initiative would allow businesses to set the tone for what type of people frequent their commercial area. He said he hopes Dinkytown adopts the rule.

“They have to decide what type of environment they want to create,” he said. “If you don’t follow the rules, you’re not going to be welcome in this particular area.”

Burrito Loco Bar and Grill owner and acting Dinkytown Business Association president Greg Pillsbury said his bar kicks out about six people per year, with little fluctuation in the past decade. He said his staff calls 911 when they kick someone out and police usually arrive within a couple of minutes.

Pillsbury said he likes the idea but thinks it would be hard to enforce because it’s difficult to get information from unruly customers.

“You can’t say, ‘Get out. But hold still real quick while I grab my camera,’” he said.

Library Bar and Grill general manager Joe Berg said the business ejects 12 to 15 patrons every year, but rarely for infractions major enough to ban them from the premises. He said he’ll support any safety measure that further protects students.

Juarez said Nicollet Mall in downtown Minneapolis has a geographic trespassing policy, and he said the Quarry Shopping Center has used the program for years to great success.

Police haven’t proposed the idea to Stadium Village. Juarez said they chose Dinkytown because it generally “has more trouble.”

Qdoba Mexican Grill co-owner Randal Gast said smartphone theft is the primary issue at his restaurant. He said thieves prey on the late-night crowd that comes in “somewhat inebriated” and leaves phones on tables while eating.

“The youth of America is pretty sloppy with their $500 phones,” he said. “For a thief, it’s a more certain thing than a purse.”

The Mexican restaurant also has guests who get too rowdy, Gast said, and he agrees that anyone he needs to ban from Qdoba should be barred from all of Dinkytown.

Juarez said most criminals on geographic trespass lists stay away from that region, but some just move on, creating havoc at other retail hotspots.

“You kind of hope people will change,” he said. “But that’s not always the case.”