“This is not fair. It’s not fair to single out one community. The lifeline for so many innocent people depends on the money we send,” said Abdulaziz Sugule, the former chairman of  SAMSA (Somali American Money Service Association) referring to Franklin Bank’s decision to end remittances to Somalia last December 30. “I hope elected officials will come up with a workable solution.”

Sugule and many of the nearly 70,000 Somali that live in Minnesota are extremely anxious and worried about how they are going to get money to their families in Somalia. In some cases it is the only money they receive. According to the U.S. Treasury Department, Somalis in the U.S. sent over $100 million home last year.

The Somali community, like other immigrant communities, send what are called “remittances” — in other words, money — back to relatives and friends in their home country. But Somalis have had their efforts to send money shut down recently by the decision of the Sunrise Banks, which includes the local Franklin, Midway and University banks, to stop aiding the Somali Money Service Business (MSB), otherwise known as hawalas, in sending money to Somalia.

The way the system works is that the hawalas give money to Sunrise Banks, which then wire the money to Abu Dabi. From there, it goes to the farthest reaches of Somalia, sometimes by camel.

Sunrise Banks stepped in to aid in the money-delivering process a few years ago after most major banks stopped aiding the Somali community, citing pressure from the U.S. State Department and Treasury Department. The government supposedly has discouraged banks from aiding the Somali community because of purported fears that the money being sent would aid terrorists in Somali.

However, the U.S. government has not offered proof that money sent to Somalia from the diaspora has actually gone to aid any terrorist organizations.

As Minnesota Somalis desperately search for ways to send money to their homeland, the question that looms largest and unanswered is why at this time Sunrise Banks stopped aiding the remittances. Sunrise Bank President David Reiling has never implied that the bank was pressured by the government.

The media has speculated that Sunrise Bank’s action resulted from the conviction of two Somali women in Rochester for sending money to the wrong side in the Somali civil war. According to the women, they had sent money to aid in famine relief in Southern Somalia.

The U.S. government has contended that the money went to fund Al Shabaab, the rebel group that holds most of famine-plagued Southern Somalia. The U.S. has designated Al Shabaab as a terrorist group affiliated with Al Qaeda.

The bank has said that it wants to protect itself and limit any liability that may have come about as a result of aiding with remittances and said in a statement, “Money remittances from the U.S.-based Somali diaspora through the U.S. banking system must have a new solution to satisfy the important legal and regulatory requirements currently in place across the nation.”

According to the bank, they have sought to work something out with the government. “We have reached out to multiple government agencies and officials, have made a specific proposal, and have told the agencies that we are seeking a constructive exchange with them in an effort to reach an accommodation that would satisfy the concerns of those sending funds, the government and the bank.”

The Somali community and its allies have held several rallies to bring attention to their plight including one on January 6 at the State Capitol. To their credit, elected officials in Minnesota have been very supportive. U.S. Senator Al Franken and U.S. Rep Keith Ellison have been actively trying to come up with a workable solution that does not put the bank at risk. 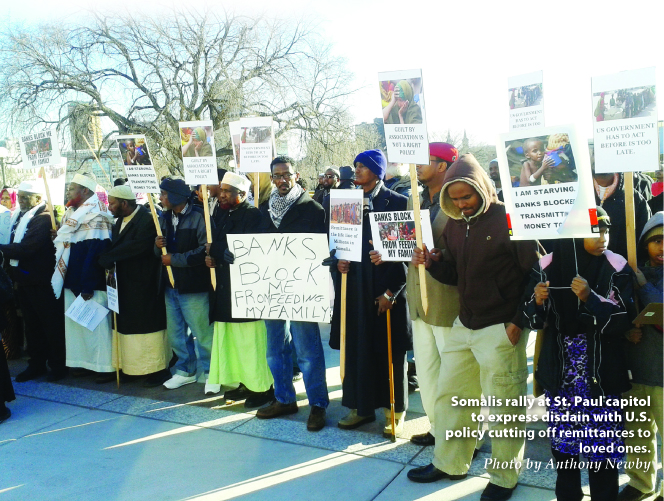 The Minneapolis City Council, including the mayor, passed a resolution on Thursday, January 12, entitled, “Support of the Somali-American Communities’ Ability to Continue Remittances to the Horn of Africa.” The resolution includes the following:

“Whereas, The Somali community in Minneapolis provides significant financial support to their relatives in Somalia that provide basic needs like food, shelter, clothing and education: and

“Whereas, The halting of these funds causes great hardship to many people in need in Somalia:

“Now, Therefore Be It Resolved the City Council of the City of Minneapolis that we stand shoulder to shoulder with our Somali-American colleagues, neighbors and constituents in their desire to support their loved ones in the Horn of Africa and across the globe.

“Be It Further Resolved that we strongly urge all concerned parties to find an amicable solution that facilitates the normal flow of remittances without compromising the safety and security of the United States.”

Council Member Lisa Goodman asked, “Couldn’t the same kind of concerns be brought up about monies going to Mexico? Couldn’t they be seen as aiding in the drug war in Mexico?” Council Member Don Samuels expressed concern that “the reputation of our country is at risk” and this could create starvation — “The situation we would be exacerbating is not okay.”

Unfortunately, it appears that the Somali community and Somalia have been caught in the middle of the U.S. government’s efforts to heighten the U.S. population’s fear of terrorism.

According to Oxfam America, “This is the worst time for this service to stop. Any gaps with remittance flows in the middle of the famine could be disastrous,” said Shannon Scribner, Oxfam America’s Humanitarian Policy Manager. [Up to a million people face starvation during the drought-related food crisis in Somalia, now six months old, before it is over.]

“The U.S. government should give assurances to the bank that there will be no legal ramifications of providing this service to Somalis in need.”

“Many transfer agencies are trying to comply with the rules, but the more they comply the more rules they face from the Treasury Department. Most of the people [Somalis] have no jobs. I don’t know what will happen if we can’t send money,” said Imam Hassan Mohamud of the Minnesota Da’wah Institute.