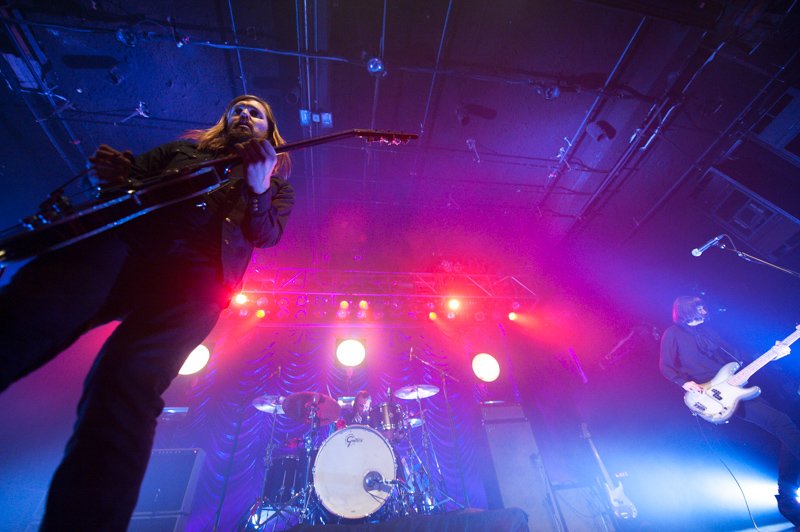 Tonal energy poured forth from the speakers, fog meandered left to right mingling with blue and green stage lights, which pierced the darkness of the iconic black décor of the Main Room at First Ave. The crowd head banged, danced, and threw fists and devil horns in unison. The relentless sound created by Band Of Skulls was in full swing, reverberating through every inch and body in the space.

They came out in full force to promote their new album Himalayan by performing the first track, “Asleep at the Wheel.” Traveling through peaks and valleys of tempo variation over the course of 19 songs, their grip never let up in stirring the audience into electric bliss. Each member a master of tone, and the stellar vocal tandems of guitarist Russell Marsden and bassist Emma Richardson was perfection.

Offering a mixture of tracks from all three of their albums, Band of Skulls demonstrated their power rock trio skills and got the crowd in a frenzy with songs like “Sweet Sour,” “The Devil Takes Care of His Own,” “Bomb,” and “Toreador.” A standout point was when they performed “Bruises” with its pounding intro and hypnotizing harmonizing by Marsden and Richardson, followed by the seductive “Cold Fame,” in which Marsden’s guitar moans and squeals like a man who just lost his love.

Other arousing songs from the set included “You’re Not Pretty But You Got It Goin’ On”–a song where drummer Hayward displays his finesse and technical mastery–and “Patterns” which Richardson took control of with her powerful vocal chords.

At the conclusion of the set, the crowd chanted “Band Of Skulls! Band Of Skulls!” repeatedly while clapping and stomping until they came out to offer up a delicious encore. The final song, “Death by Diamonds and Pearls,” was a fine choice to work the crowd towards ecstasy and left them wanting more.  The night was like a three-part intoxicating sonic brew, consisting of one part Marsden, one part Richardson, and one part Hayward that showed this English rock trio will continue to make a name for themselves for some time to come.

“Asleep at the Wheel”
“Himalayan”
“I Know What I Am”
“I Guess I Know You Fairly Well”
“Patterns”
“Brothers and Sisters”
“Bomb”
“Toreador”
“Bruises”
“Cold Fame”
“Blood”
“Hoochie Coochie”
“I Feel Like Ten Men, Nine Dead and One Dying”
“The Devil Takes Care of His Own”
“Hollywood Bowl “

“Sweet Sour”
“Light of the Morning”
“Death By Diamonds and Pearls”