Northfield and several surrounding communities are planning for an August 1-4 blowout that will bring renowned brass and wind bands to southern Minnesota, giving the area a cultural and economic boost. 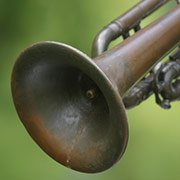 The Vintage Band Festival will bring more than 30 historic and ethnic bands to the Northfield area for 100 concerts during the four-day span. Music samplers and the festival schedule can be found at vintagebandfestival.org.

St. Olaf College music professor Paul Niemisto (see {link to Wednesday story} for related article) and a group of area volunteers occasionally stage the festival when feasible. The most recent one was in 2010.

Niemisto said this year’s gathering would observe the 150 years since the American Civil War. Commemorate Civil War bands are coming from Maryland, Michigan, Texas and the 1st Brigade Band, from Watertown, Wis., will be performing. The latter band was formed when 18 members of the Broadhead Brass Band joined the Union Army and became the Band of the 1st Brigade, serving under Gen. William T. Sherman.

Many of the local, or Minnesota based bands, keep alive ethnic music and historical band traditions. Good examples include Mariachi mi Tierra, Klezmerica that performs Jewish secular music from Eastern Europe, the Brass Messengers that plays street band music from the Caribbean and Balkans, and the Finnish brass band American Poijat (Boys of America) that Niemisto formed with other music educators from Minnesota campuses and with professional orchestra musicians.

Other music with touches of “home” come from British-style brass bands, including the Lake Wobegone Brass Band and Sheldon Theatre Brass Band, and New Ulm will supply German sounds with the Original New Ulm German Band and the Bavarian Musikmeisters.

Cultural benefits from the festival can only be measured on a personal level by attendees. A festival of this magnitude, however, does provide economic benefits to Minnesota and the specific region.

The Vintage Band Festival will add to those numbers this year. That should be music to the ears of tax collectors, local merchants and restaurant and innkeepers in southern Minnesota.