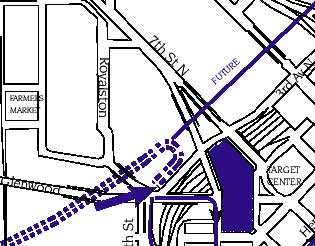 The present terminus of the Cedar Lake Bicycle Trail

What happens when funding for a new baseball stadium, a commuter rail line and a commuter bike trail is approved and all three of those projects have to be crammed into a tight spot in downtown Minneapolis?

Nobody can tell me.

I’ve asked several public officials and all of them haven’t a clue.

The Cedar Lake Trail is considered to be the nation’s “first bicycle freeway”. The trail is 4.4 miles long and connects the western suburbs to a spot just west of downtown next to Lee’s Liquor Bar on the corner of Glenwood and North 12th Street. The Phase Three extension of the trail takes it all the way downtown and eventually to the Mississippi River.

One problem is the Cedar Lake Trail runs along the railroad right-of-way which narrows considerably as it passes through the city’s warehouse district. Another problem is the stadium will have to be cantilevered over that right-of-way. I’ve been told that home plate will be located right over the tracks.

Another problem is the Northstar commuter trains may have to be parked under the stadium. It’s not going to be a pleasant bike ride in a tunnel filled with diesel fumes.

One idea being floated is to detour the trail through the Twinsville development and onto a ramp along the north side of the stadium, but that would be very expensive.

I’ve been told that the fate of the Cedar Lake Trail will be decided by the end of the year.