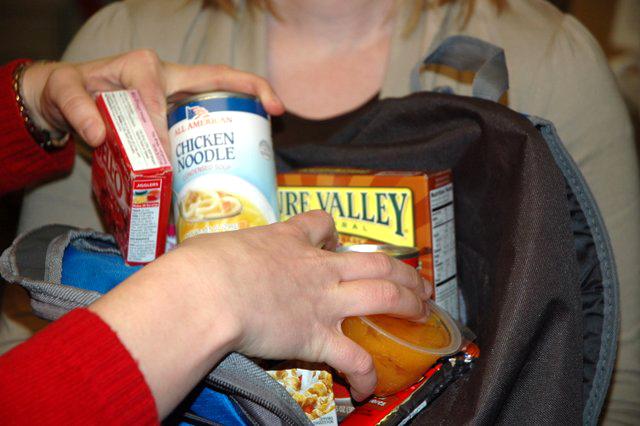 Most school kids anxiously await the Friday dismissal bell, signaling the beginning of the weekend. But for many, instead of two days of fun the bell signals two days without enough to eat.

Students who receive free and reduced lunches are assured of two nutritious meals during the school week. Breakfast is free for all those qualifying students. But thousands of students throughout the metro area are not assured of adequate nutrition on weekends.

Backpack Buddies has changed that scenario for more than 1,000 students at Andersen Open Elementary School in Minneapolis and John A. Johnson Elementary in St. Paul. Sponsored by the Junior League chapters in the respective cities, the Backpack Buddies programs send eligible students home on Fridays with backpacks filled with food to help them over the weekend hump.

“It is like a life preserver for our kids. It’s a fabulous, fabulous program,” said Rhonda El-Said, an assistant educator at Andersen who serves as the liaison between the school and Junior League of Minneapolis. The difference it’s made in the students’ concentration and behavior on Mondays is amazing, said El-Said. “They’re coming back to school more ready to learn. If you’re hungry, that’s what you’re thinking about.

Backpack Buddies is in its fourth year at Andersen, and it now serves 320 students in grades 1-4.

“We’ve stayed with the same group of students,” said Sarah Curfman, president of the Junior League of Minneapolis. “Our biggest problem has been getting families to sign up, but for those who have, it’s been well received,” she said. Ninety-nine percent of the students at Andersen receive free and reduced lunch, but if 100 percent of the kids in grades 1-4 signed up with Backpack Buddies, “it would be OK,” Curfman said. “We are a nonprofit and we can do that. And because there is such high need there, the other one percent are probably on the cusp,” she said.

No one is excluded

Likewise, Johnson Elementary in St. Paul has a huge percentage of students receiving free and reduced lunch – 98 percent. And like the Andersen program, “We don’t exclude anyone,” said Beth Schatz, president of the Junior League of St. Paul. . “At 98 percent, we’re pretty sure everyone who gets [a backpack] needs it.” This is the second year for the St. Paul Backpack Buddies, serving 50 first-graders and 50 second-graders.

The backpacks are filled with kid-friendly, easily prepared foods such as fruit cups, granola bars, cereal, soup, and mac and cheese. Surprising favorites among Johnson school students are vanilla soy milk and oatmeal. “They have been huge hits,” Schatz said. “The things we’ve heard from the parents is that the kids enjoy bringing home the backpacks and sharing with their siblings.”

Both programs work with Second Harvest Heartland food pantry to obtain food; they also accept donations of food and cash. They lament the fact that thir resources are limited and wish they could assist more children. They encourage other organizations to make Backpack Buddies a service project. There are programs all over the nation and the name is not copywrited, Schatz said. “I love it. It just kind of snowballed.”

Neither Junior League president was aware of when or where Backpack Buddies started. The answer came from Barbara Mains, founder of Help4Kids, a nonprofit in Myrtle Beach, S.C. Backpack Buddies is one of the programs sponsored by Help4Kids.

“It originated with a young girl in Texas, a young teacher just starting out,” Mains said. Probably. There may have been similar programs in other places before, but it’s pretty widely accepted that Backpack Buddies started in Bowie, Texas, in 2005 or 2006 as a result of an earlier experience by kindergarten teacher Karla Brown.

According to a story by Erin Hayes for ABC-TV, Brown was on cafeteria duty one day when she noticed a group of children giggling. She walked over to see what was going on and she saw the children’s laughter was directed at a kindergarten boy.

“I walked over closer to the table, and he was licking his plate,” Brown said. Looking up at her with sad eyes he said simply, “I’m hungry.” The boy’s father had left the family, leaving them without resources. She got help for that family through her church. Then she began teaching at Bowie Elementary School, which had a a higher percentage of low-income students than at her previous school.

Out of sorts on Mondays

“My whole class,” she said, “was just, you know, irritable.” She noticed they were especially out of sorts on Monday mornings. “And I thought about that little boy, and it just kind of came back to me,” Brown said. With help from her new church, Lighthouse Assembly of God, Backpack Buddies, as we now know it, was born.

This year Junior League of Minneapolis expects to spend about $3.50 to fill each backpack per week. Junior League of St. Paul expects its costs to be up to $4 per week. Those figures could rise, however, if projected food costs increase as a result of this summer’s drought. “It’s what keeps me up at night,” said Schatz.