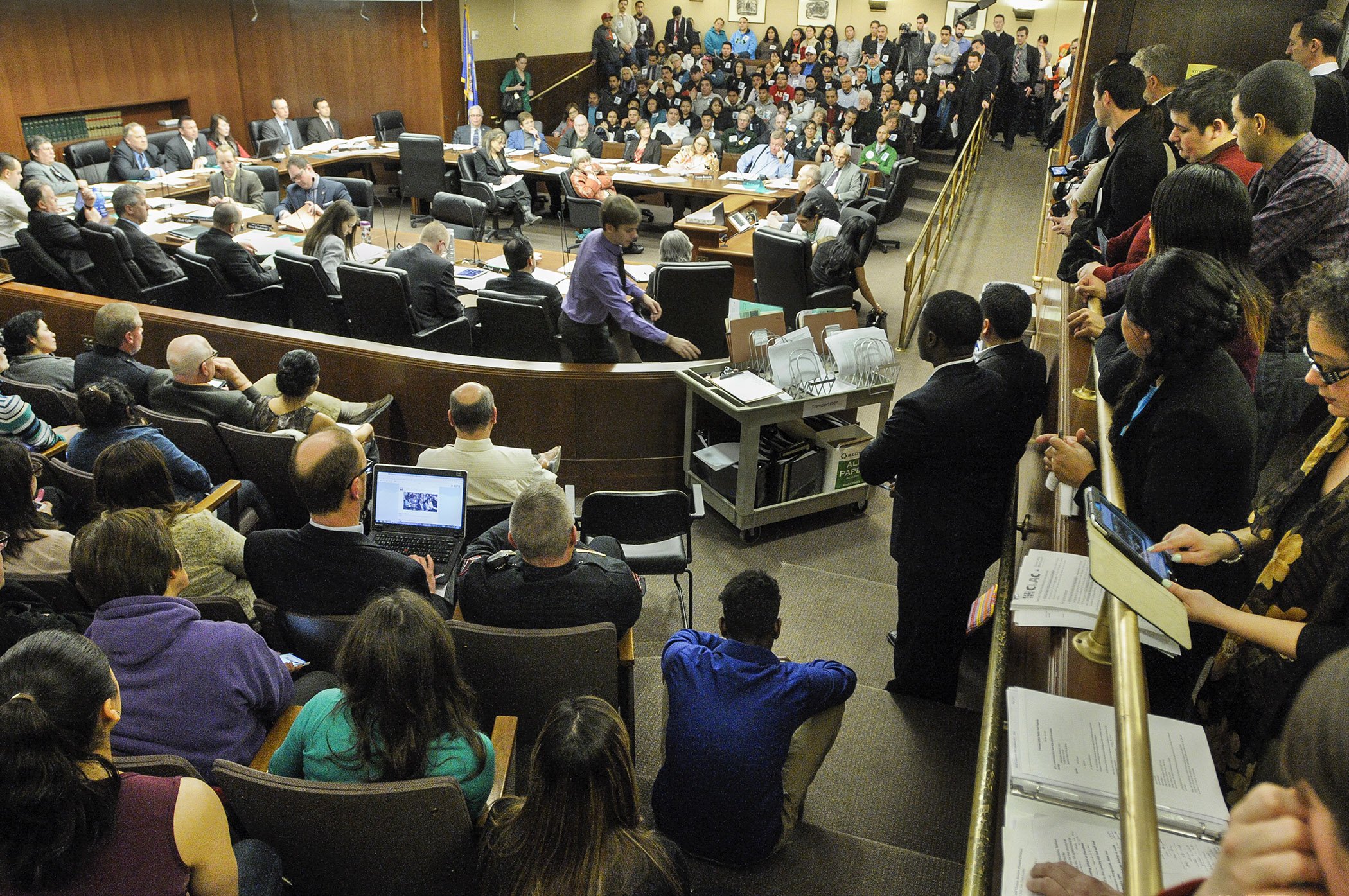 High interest an undocumented immigrant driver’s license bill was apparent as a standing-room only crowd packed into the basement hearing room of the State Office Building March 25 for a meeting of the transportation committee. Photo by Andrew Von Bank

Maria Negreros says she risks breaking the law each day to drive her children to preschool.

Jovita Morales told lawmakers that in August 2007 it took hours to reach her two children who had been inside a bus that fell along with the Interstate 35W bridge into the Mississippi River.

Anna Serrano wants to see her parents — owners of a new restaurant — to be able to get behind the wheel legally and stop relying on others for rides.

“I want my parents to drive safely to work without worrying about being pulled over,” said Serrano, an 18-year-old college student from Willmar who emigrated with her parents from Mexico as a small child.

Sponsored by Rep. Rod Hamilton (R-Mountain Lake),HF97 would eliminate the need for proof of lawful residency in the United States to obtain a driver’s license or state identification card, something the sixth-term lawmaker and a diverse coalition of supporters said would mean more insured drivers and safer Minnesota roads.

No vote was taken on the bill, nor on identical legislation sponsored by Rep. Karen Clark (DFL-Mpls),HF98. A pair of Senate committees have already approved a companion sponsored by Sen. Bobby Joe Champion (DFL-Mpls). SF224 now awaits action by the Senate Rules and Administration Committee.

‘Bigger than a license’

Immigrant rights advocates packed a State Office Building committee room for the afternoon hearing, as well as an overflow space where they listened to live audio. While it’s an issue typically fraught with politics, Hamilton told the committee that driver’s licenses for undocumented immigrants is a good idea for a simple reason.

“We would have an individual who would go through trainings, would receive a license, then purchase car insurance and drive on our roads,” he said.

But following more than an hour of emotional testimony from a list of backers that included immigrants and the children of immigrants, supporters representing business interests and labor groups, police departments and the church, Hamilton acknowledged the issue of letting undocumented immigrants drive legally on the state’s roads is about more than that, too.

“If you listen to the testimony closely, it’ll boil down to one thing,” he said. “The Declaration of Independence, and the moral belief that it is a right; that we’re born equal to pursue life, liberty and the pursuit of happiness. We’ve had the conversation — this is bigger than a driver’s license.”

Two years ago, state lawmakers passed the Minnesota Dream Act into law, making the children of some undocumented immigrants eligible for in-state tuition and financial aid. Clark, who sponsored similar driver’s license legislation in 2013, expressed hope the committee would return to the bill for a vote this session, saying she believed supporters were a few votes shy of winning approval. [The hallway on the first floor of the State Office Building was packed March 25 with supporters of an immigrant driver’s license bill being heard in the House Transportation Policy and Finance Committee. Photo by Andrew VonBank.]

Some expressed apprehension about moving forward with a similar plan in Minnesota. Rep. Mark Uglem (R-Champlin) said he is “very concerned” with the legislation.

“If this was to go forward, I think we need to examine other states that are having major problems,” he said.Rep. Jim Nash (R-Waconia) and Rep. Abigail Whelan(R-Anoka) also voiced opposition to the bill, though they thanked Hamilton for his work on the legislation.

Backers expressed disappointment in the lack of a vote Wednesday but called the hearing a step forward.

“I think we need to pass this bill this session,” said Rep. Frank Hornstein (DFL-Mpls), “and I hope we can put our heads together.”