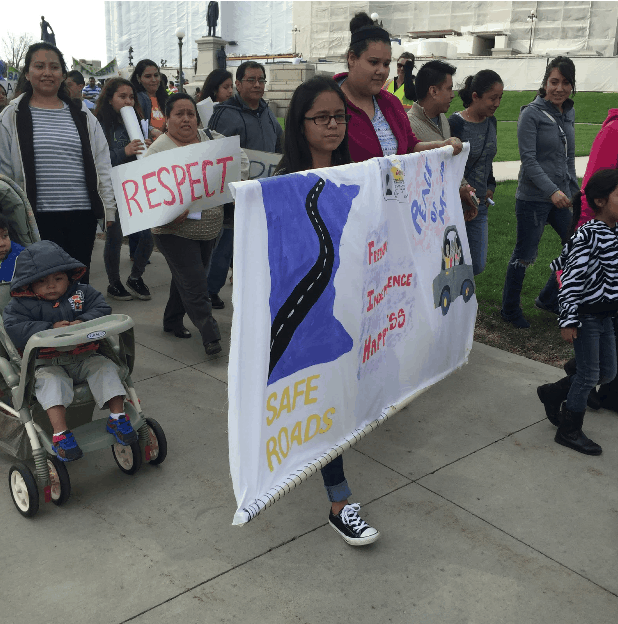 More than three hundred Latino residents rallied in front of the St. Paul Capitol building to urge Governor Dayton and House Speaker Paul Thissen to pass HF348, a bill  that would allow drivers licenses for all.  Organized by Mesa Latina and supported broadly by the immigrant rights movement  protesters raised signs and chanted “Si se puede!” “Yes we can!” Many drivers and passerby joined in solidarity, supportively honking or walking along. The demonstration concluded at the Cedar Street Armory in a cultural celebration with musical performances by local artists.

Currently, more than 34,500 Minnesotans with temporary visas or deportation reprieves under a 2012 Obama program have driver’s licenses that say “Check status” and list their visa expiration date. The lack of a drivers license is the cause of many deportations as being pulled over without a license is often the first entanglement into the Criminal Justice System.

In Minnesota, the fight for driver’s licenses regardless of immigration status began in 2003, when then-Gov. Tim Pawlenty barred the state from granting driving privileges to undocumented immigrants. A 2010 bill garnered little support. In 2013, the state Senate passed the proposal, but it stalled in the House that year and in 2014. Nationally, 12 states and territories allow undocumented immigrants to obtain a license (Star Tribune).

This year, advocates have returned with a focus on public safety.

“It …makes the rest of Minnesotans safer by addressing the fact that there might be unlicensed drivers out there,” said Sergio Quiroz, an Aztec dancer at the event.

Opponents of the proposal to allow undocumented immigrants to receive driver’s licenses argue that this would lend legitimacy to illegal immigration or increase fraudulent voting. To register to vote, residents must provide a driver’s license number or the last four letters of their Social Security number and check a box certifying they are U.S. citizens.

Many advocating for licenses at the rally feel that being able to legally drive is a basic necessity, and legislation is long overdue. Eduardo Cardenas, a human rights activist associated with the Waite House community believes that this is a structural impediment in the fight for human rights.

“It’s treated as a privilege, but the reality is that people need to work to sustain their families, and they need to go to school, and especially in MN, with this climate, they have to do it by automobile,” said Cardenas.

Undocumented immigrants paid an estimated total of $10.6 billion in state and local taxes in 2010 and many feel it unfair that they cannot take part in some of the privileges granted by the state.

“It is important because they work too- they’re mothers and fathers who drive their children to school, to go to work. We are also residents and citizens of Minnesota, we are not second-class citizens. We are just looking for a fair chance just like every other Minnesotan,” said Quiroz.