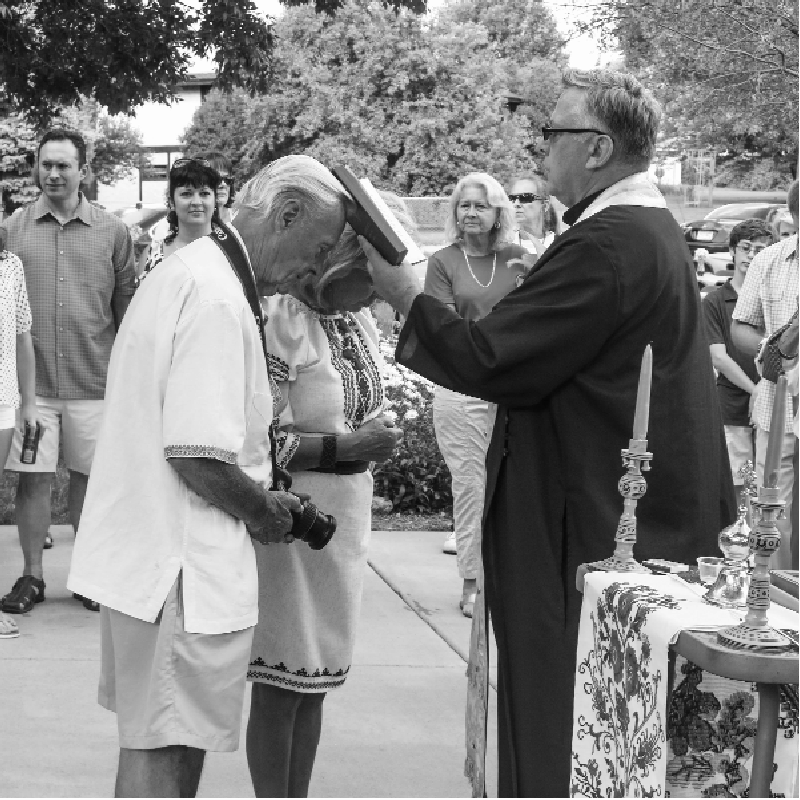 Although Luba Lewytzkyj was born in the United States, she retains close ties with Ukraine, her parents’ homeland. Her father, the Very Reverend Dr. Wolodymyr Lewytzkyj, was a priest at St. Michael’s & St. George’s Ukrainian Orthodox Church in Northeast, from 1955 to the mid-1960s. He represented the 10th generation in his family to serve as a priest.

Luba, a Northeast Minneapolis resident and Ukrainian American Community Center board member, follows the international situation closely. In 2012 and this May, 2014, she traveled to Ukraine as an International Election Observer.

In 2012, when Viktor Yanukovych was still Ukraine’s president, voters were choosing legislators. Two years later, Yanukovych fled the country after protestors clashed with the police over his European Union pact veto and repressive policies.

Although this year’s presidential election was originally slated for December, Ukraine called for an early election, “contrary to what Russia wanted,” Lewytzkyj said. She joined a 222-member observer team (there were 3,600 international observers), sponsored by the Ukrainian Congressional Committee of America, UCCA, the same group that had sponsored her previous trip.

She said she saw vast differences between the elections. “Two years ago, the elections were total chaos. The corrupt administration was purchasing votes and creating fake ballots. They were not happy to see the observers. They were suspicious of us.

“On this trip, the people were happy to see us because they were committed to having a democratic election. After all the past corruption and stopping of funds and degradation, they welcomed the election. There was a holiday atmosphere. They wore their finery, their embroidered clothing. Multiple generations turned out. It was an amazing change. This election was totally fair, open and transparent. My team observed at 58 polling sites. The process was smooth.”

They had “remote voting,” which is somewhat like absentee balloting in the United States. “People who were homebound could vote in their homes. Officials had small mobile boxes they took to them. They ran into some problems because some people had registered to vote at home, but were so excited about the elections that they came to the polling places instead. It showed their commitment and passion. One 98-year old man would not accept any help. He came out and said, ‘I’m responsible for the election of the next president!’ Another man who lived near the Polish border forgot his passport. He brought a neighbor to vouch for him but they wouldn’t accept that, so he rented a car and drove back home for his passport. When he got back, he said, ‘Now we can elect a president.’”

Because the fighting between pro-Russian separatists and Ukrainians was and is still raging in eastern Ukraine, the observers took safety precautions. “On this trip, we did not go into the east. People risked their personal safety and their lives to vote in the east.”

Petro Poroshenko, a billionaire nicknamed The Chocolate King, won with just under a 55 percent margin, she said. “He is from central Ukraine and has done good things for the area from which he comes. He has a strong pro-Ukraine attitude. People felt he was the most qualified. He has strong business strengths; there is a feeling that he will help small and medium businesses to develop.”

Lewytzkyj said that one thing Yanukovych did when he was president was attempt to wipe out the Ukrainian army by cutting its budget and troop training. “We saw billboards in Ukraine asking people to give an amount—in the U.S. it would be equivalent to about $10—to support the soldiers. The fighting has been going on since last November. The borders are literally open between Russian and Ukraine. For [Russian President Vladimir] Putin to deny that [Russia’s involvement] is ludicrous.”

She said she is hopeful that the recent international sanctions against Russia, “with even Germany now stepping up” will make a difference for Ukraine. “We saw this [Russian aggression] coming way before the Olympics,” she added. “Some people thought that it would stop with the Crimea, but you have to know Putin’s game plan. The east has 50 military factories and is rich in minerals. Nowhere else can Putin restock himself.”

Lewytzkyj and her husband Bob Morris recently asked a Ukrainian priest, the Very Reverend Petro Siwko from St. Katherine’s Ukrainian Orthodox Church in Arden Hills, to bless their house in Northeast’s St. Anthony West neighborhood. The July 26 event was an Orthodox Christian tradition, “to rid it of every evil and fill it with every blessing.” The priest sprinkled holy water in every room and anointed each of the four outer walls with the sign of the cross in holy oil. Lewytzkyj said they hosted 55 guests and had a picnic in B.F. Nelson Park.

“It is tradition, when you move into a new home, to have it blessed,” she said. “It removes evil spirits. You also have your house blessed every year.”

She lives close to the Ukrainian Community Center, 301 Main St. NE, and serves on the board, she said, to help preserve and perpetuate Ukrainian culture. The center offers Ukrainian folk dance lessons and sponsors community events. “We hope to offer cooking classes and Ukrainian egg classes in the future,” she added. The event center has a banquet room available for wedding receptions, large parties, and meetings.

The center will host a Ukrainian heritage festival on Sunday, Sept. 21, noon-5 p.m. Renee Bell, event center coordinator, can be reached at 612-379-1956. The website is www.ukrainianeventcenter.com.