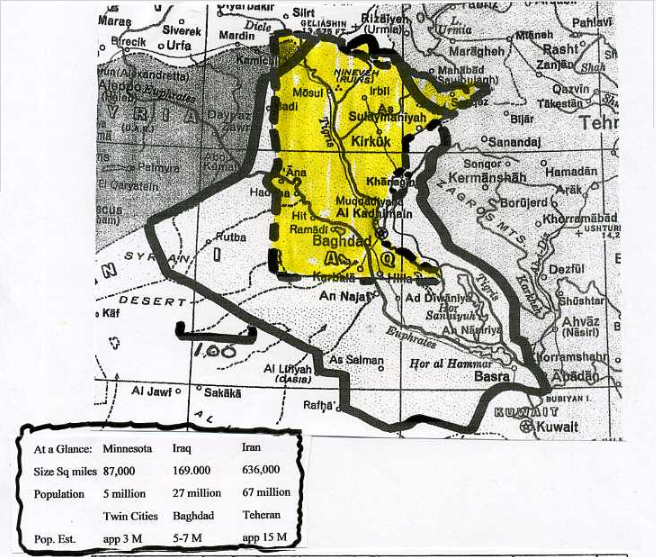 Pre-note: three interesting links at the end of this post.

To your point of questioning what our media tells us…You may have heard that the religious leader of Shia Muslims was fomenting violence. This article is considerably nuanced…complexity we Americans tend to overlook.
More comments at end of this post.

It seems time to “re-deploy” a sketch map I made about 2005 of a place then in the news…and now, again: Iraq environs ca 2005001. My college background was geography-centered, and maps like these help me to establish a personal context for places less familiar to me.

Personally, I think President Obama time and time again has exercised generally good judgement in his decision making, given the vast array of pressure points exerted on him from all sides. This will happen with Iraq too. Most every faction on every side will criticize what he does. We are good critics in this country.

Soundbite one: We Americans live in a very complex world, but we are (my opinion) a “sound bite” society. We don’t do complexity well. We seem to decide things based on personally chosen “headlines”.

During significant amount of time together in recent weeks, I had an opportunity, through a number of casual conversation with a Pakistani civil official, another perspectives on America, al Qaeda, Taliban, history, national borders, etc. Of course, a great many significant events have occurred in the last two weeks in his region of the world including terrorist attacks on the Karachi Pakistan airport; announcement of a changing U.S. role in Afghanistan, and, now, ISIS in Iraq and Syria.

Sound bite two: My colleague, nearing the end of his year in the U.S., seems genuinely positively impressed with Americans, generally; but “America”, on the ground in his country and others, is not viewed positively. We are good people, here, he says; but we are justifiably criticized for what is done in our name, there. The U.S. meddles everywhere through our government policies. On the ground, at home; we seem blithely (and dangerously) unaware of what is or has been done. Even our “friends”, as Pakistan is, suffer consequences. At one point he mentioned “55,000 casualties”, though I don’t recall specific context.

Sound bite three, my opinion: We ordinary people trust information from our own “trusted” sources that is not trustworthy, and we do so at our peril. We are a slave of propaganda, intentional or inadvertent. I offer one very recent example:

Last Friday night, CBS news anchor Scott Pelley was reporting on the current crisis in Iraq, and among other things brief mention was made of 4486 American deaths in the second Iraq War 2003-2008. There was no context provided. I specifically noticed the number, isolated and specific as it was, and decided to check out the source. The newscast carried no mention of Iraqi casualties, military or civilian, during the same war, or ancillary costs to people “over there”: displacement of citizens, ruined homes and communities, etc.

The casualty number seemed to be an intended, important, stand-alone.

The source of the CBS information appears to be iCasualties.org . If you go there (I hope you do) it is not possible to easily find a home page which, in turn, divulges who maintains the site, or vouches for its accuracy. I had to go to Wikipedia to find anything more about the site: it is here. It seems legit.

There are other “body count” sites, of course. One I’ve known about for years, which seems to have rigorous standards, is iraqbodycount.org At that site, the Iraq death toll for the Coalition Military forces 2003-2013 is 4804. This is identical to the iCasualties number.

But there is a dramatic difference between the two sites in a critical respect: IraqBodyCount records 188,000 “violent deaths including combatants” in the Iraq War, of which 124,598 – 138,916 were “documented civilian deaths from violence”.

If you like “hunting” you can also find Iraqi casualties at the iCasualties site: 60,277. There is a caveat with the information: “This is not a complete list, nor can we verify these totals. This is simply a compilation of deaths reported by news agencies. Actual totals for Iraqi deaths are much higher than the numbers recorded on this site.”

It doesn’t take much looking to determine that there is a huge difference between the data CBS wanted to convey to its viewers (4486 Americans dead), and the horrible reality for Iraqi civilians in the Iraq War (up to 188,000 casualties as a result of the Iraq War). The numbers are for the same conflict, same period of time. And this does not consider the immense displacement of human beings (refugees) who fled one place (say Mosul, now) for safer conditions elsewhere; and disruption of society there. Or deaths related to the war in other countries in the region, like Pakistan.

I am reminded of the long-ago and deadly Vietnam War, where on the daily news we were treated to news reports every day that gave variations of this message about the war: “15 American deaths; 1000 Vietcong killed”. By golly, it said right there on the TV, every afternoon, that we were winning the body count (and thus the war). Mostly, I didn’t question these numbers, nor did many. They wouldn’t lie to me, I said to myself. But how real were they? There is a famous court case, Westmoreland vs CBS, back in 1982, which remains controversial to this day about this. You can google it for more than you’d ever want to know, from assorted sides.

The first casualty of war is the Truth, and CBS last Friday night revealed the need for extra caution in taking at face value anything reported on the news.

It takes more to be a good citizen than to simply be a good person in your neighborhood. Become informed and involved.

As for me, the only certainty of war is that it is killing us in many ways more than just physical death of our GIs. We need to recognize that.

Thanks to respected newsletter publisher Jeff Nygaard, here are two recent articles, here and here, from a long established source which has kept tabs on the Middle East since 1971.

Jeff also gave two examples of what he referred to as “Inadvertent Propaganda” at a recent workshop I attended. Here they are, with his permission: Nygaard Propaganda Examp001

UPDATE, June 18: Another example of messaging, from overnight, long but good: here.

Mornin’ Dick,
Mention of the truth in your blog, had me thinking about a quatern I’d written for an adult ed poetry workshop I’d recently attended. What little poetry I write is most always humorous, but a class assignment to write a quatern had me do the following.

Reading your blog I think that perhaps, we and every newscast should begin with Sir Walter Scott’s: “I cannot tell what the truth may be; I say the tale as ’twas said to me. A quatern is a four quatrain stanza poem where the 1st line becomes the 2nd line of the second stanza and so on:

I can’t say what the truth may be,
I say the tale as said to me,
That was said by Wally Scott, he
Transcends the poet bourgeoisie.

With honest doubt the creed I see:
I can’t say what the truth may be.
The truth, tis said, will set you free,
Yet I sit here skeptically.

Am I a slave? Eternally,
With everything to disagree:
I can’t say what the truth may be;
All that’s said is chicanery?

And so be open and be free,
Believe not what the eye can see,
Live a life of skepticity.
I can’t say what the truth may be.

From the beginning of this latest crisis I have recalled a comment I heard at a coffee shop in one of the Sun Cities near Phoenix in November, 2003, after the invasion of Iraq, and the U.S. “mission accomplished”.

The proprietor was Iraqi Christian, from Chicago, earlier from Mosul, and was happy that the U.S. had gone in to remove Saddam Hussein because his regime had not dealt kindly with the many Christians in Mosul.

As it has turned out, the Christians in Mosul and elsewhere have not fared any better since 2003, and certainly not today. The adage, “be careful what you pray for” comes to mind.