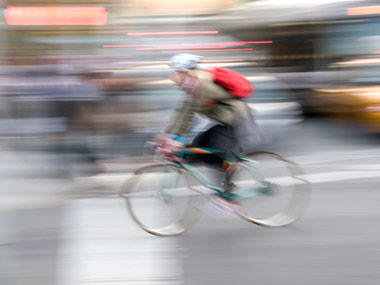 A century ago, the idea of a Complete Streets movement would have left Americans scratching their heads. Public right-of-way of the time was already complete, teeming with pedestrians, bicyclists, pushcarts, horse-drawn conveyances and a few newfangled motor vehicles. Then the mayhem began.

“The automobile looms up as a far more destructive piece of mechanism than the machine gun,” the New York Times editorialized in 1924, with memories of the War to End All Wars still fresh. “The reckless motorist deals more death than the artilleryman. The man in the streets seems less safe than the man in the trench. The greatest single lethal factor is the automobile.”

In the previous year, U.S. traffic deaths had totaled about 15,000. What florid prose would the Times writer produce today? Crashes now kill well over 30,000 Americans every year, thousands of them not occupants of the tin lizzie’s descendants. How did we get to quiet acceptance of this ongoing slaughter? At least two ways:

These historical musings were prompted by a new report http://www.smartgrowthamerica.org/2013/04/08/announcing-the-best-complete-streets-policies-of-2012/ placing Minnesota in the national forefront when it comes to reversing motor vehicles’ dominance of the streets. Smart Growth America and the National Complete Streets Coalition surveyed nearly 500 U.S. complete streets policies, which are dedicated to the once obvious, and later radical, notion that city thoroughfares should be for all users, whether on foot, two wheels or behind a steering wheel.

I counted 28 Gopher State units of government, ranging from the state to the northwest city of Battle Lake (pop. 698), in the report’s list of complete streets policies. Minnesota’s 2010 statute on the subject was rated tops at the state level on a 10-measure scale weighted heavily to reward attention to “all users and modes” and “implementation.”

This movement is still in its infancy, but it promises a retro-style future for our streets that is both safer and more inclusive of all the ways we get around.